I liked this theme! I figured it out early on but there was enough variety to keep it interesting.

It would be understandable if this theme made you a bit hungry. The theme answers all contain different types of sandwiches. 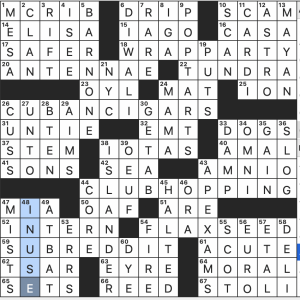 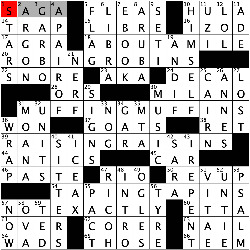 The theme of this puzzle is of the sort that seems to have fallen a little bit out of fashion: change a letter, get a new word, put the words together to make a phrase that can be clued in some amusing way. This is not a dig at Jeffrey’s puzzle; it’s nostalgia on my part, since Bruce Venzke and I made lots of such puzzles together back in the aughts. No revealer needed, just a theme that’s apparent to the eye pretty early on.

Each of the four theme entries is a two-word phrase in which the second word is identical to the first, except with the G at the end of the first word changed to an S in the second:

Was not crazy about the fill in this puzzle, which included the contrived-feeling ABOUT A MILE [5,000 feet, roughly], the Queen’s English spelling TYRE [Spare in a Brit’s boot], VITAE [Curriculum __ (resume)], which pretty much has to be clued as a fill-in-the-blank, and a plural first name to boot (ANNES at 26D). I think splitting those 10s ABOUT A MILE and NOT EXACTLY with another black square might have been a good idea. 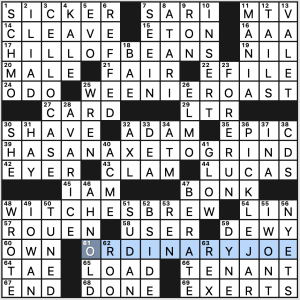 It’s awkward to start off with a noun then move on to three verbs. It just doesn’t flow, but then I don’t have an alternative suggestion to make it work better.

Also, I’m curious if any of you roast your own coffee beans. At least we’ve gotten away from the K-cups in our household, but I’m too lazy to grind my own beans, let alone roast them. I’d be interested to hear from some of you coffee connoisseurs.

PICKLE JAR and CELLO CASE top the fill, but I have to give EVO [Sporty Mitsubishi] the side-eye, and I’m sure there aren’t many who are glad to see the return of crosswordese ODO [“Star Trek: Deep Space Nine” character]. Hey, I’m as geeky as the next guy, and I know that ODO was played by René Auberjonois, but that doesn’t make him Monday-level fill.

The theme doesn’t quite flow (though it puts me in the mood for a good cuppa). The fill is mostly good. 3.4 stars. 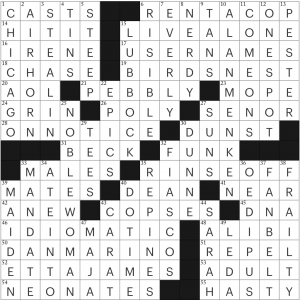 Today I learned that the line “I’m such a baby because the dolphins make me cry”in “Only Wanna Be With You,” which I have forever assumed I was mishearing (because why would dolphins make anyone cry?) is actually correct but is about the Miami Dolphins, which is why DAN MARINO is in the video. What a world! Whatever other feelings I was having about this puzzle (which were mostly all positive anyways!) have been blown out of the water by the power of this realization. This puzzle gets an automatic several-star bump up in my book for this astounding piece of trivia masterfully incorporated into the puzzle. Apparently I’m that easy! Anyways, the rest of the puzzle:

The long stuff (NOBLEWOMAN, ALAN MENKEN) is fine, nothing compared to the mind-blowing Hootie trivia, but the corner stacks today are pretty spectacular. We have RENT-A-COP / LIVE ALONE / USERNAMES / BIRDS NEST in the NE and IDIOMATIC / DAN MARINO / ETTA JAMES / NEONATES in the SW. Wide-open corners like these are a bear to fill cleanly, but most of the crosses and fill around them are pretty stellar. I have never heard of LUBBOCK, Texas, but that’s probably a me-problem. I was also unfamiliar with the name ONE SPOT, which google doesn’t totally bear out as being a standalone name for a particular domino, so maybe this is just an adjective (in which case I’m less convinced that this is good fill).

Overall, I guess this was a mixed bag, but with those bonus Hootie stars, this puzzle still gets nearly full marks from me. Also, Darius Rucker, I know how you feel– last night the Steelers made me cry. 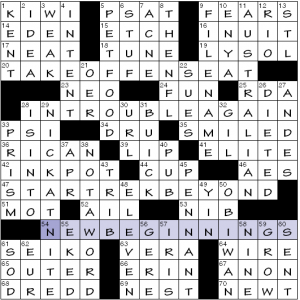 The inspiration and titling is very similar to the 21×21 Saturday Wall Street Journal crossword that I wrote about on 2 January.

The execution, however, is quite distinct, and it’s nicely done. My sole quibble regarding the theme is, why so late? Today is 48d [XI] ELEVEN January. Mysterious.

So I guess that accounts for the curious deployment.

Better late than never….so this will be quick.

This played a bit easier than the usual Monday offering from Brendan. The top fell quickly. I stumbled around the middle for a short while and then worked my way back from the bottom. As always, a satisfying solve. 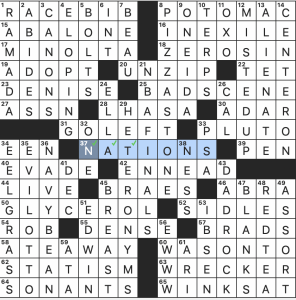 What I didn’t know before I did this puzzle: that Tuck’s twin on “Paw Patrol” is named ELLA. My kid is 20 and so Paw Patrol is a mystery to me.