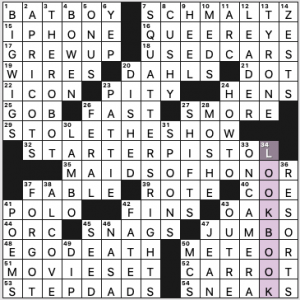 Solved with the timer off because this past week has just been so distracting. And then I wasn’t inspired to actually start solving and then start blogging for a while. I’m sure many of you can relate! Procrastination and dampened motivation are at epidemic levels.

New to me: 48a. [Complete loss of self-identity], EGO DEATH. Did not know this term.

German vocab I didn’t know: 2d. [Fruits that are the basis of Marillenschnaps], APRICOTS. Are these cookies?

I enjoyed the puzzle, and it felt like a smooth solve—at one point I noticed that three quadrants of the puzzle were entirely filled in and the last one was completely empty, meaning I hadn’t gotten stuck anywhere along the way. 4.25 stars from me.

All right. You got me, David Steinberg! I hope you enjoyed that.

Did you all get RICKROLLED, too? In case you’ve been living on Mars for the past decade, rickrolling is the bait-and-switch Internet meme where an unsuspecting user is tricked into clicking on a link to a video of Rick Astley singing “Never Gonna Give You Up.” This puzzle doesn’t have a link to the video, but it does the next best thing; it disguises the song title at the starts of the theme answers. The revealer is clued [What you’ll be after reading the starts of the starred entries?]. Edited to add: According to my 12-year-old, this is “genius.” 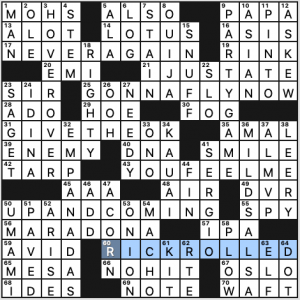 I love all the theme answers; they’re lively and in-the-language. As to the theme itself, nobody really enjoys being pranked, so I won’t subject you to the song. Besides, a case has been made that rickrolling is “sexist, racist, and transphobic.” So I think I’ll just leave it alone.

That issue aside, the fill is very nice all around. HOVER OVER is just okay, but PARTY GAME, MILD SALSA, and EMPANADAS sounds like a good time waiting to happen (though I’ll take the spicy salsa). “I JUST ATE” is nice as well. I don’t follow futbol but I think I must have heard the name MARADONA [Soccer move involving a spin] at some point. The eponymous Argentinian who gave the move its name just past away in November. But the move itself involves dribbling the ball, stopping, spinning, and moving off in a different direction to shake off your opponent. Here it is in action.

The only scowl-worthy bit of fill was AL MVP which was difficult to parse. 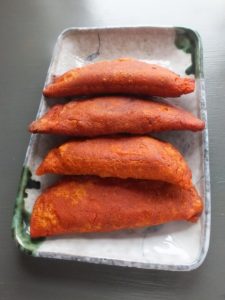 And that’s all I have for this fun “tricky” puzzle. Four stars.

All right, fine. If you really want to hear the song, here it is: 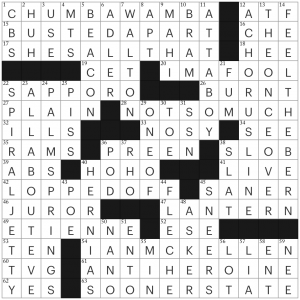 Hello and welcome to Friday, March 321, 2020! Today we have a lightly challenging puzzle from Anna Shechtman that took me slightly longer than most New Yorker Fridays, mostly because I spelled CHUMBAWAMBA wrong and then spent about a minute searching for my error.

This grid has an interesting shape, with some tetris-looking blocks in the middle breaking this grid into 4 sets of 11-letter stacks. And what stacks! We have CHUMBAWAMBA / BUSTED APART / SHE’S ALL THAT in the N; SPIRAL JETTY / ALL ABOUT EVE / PALM SPRINGS  in the W; A CHORUS LINE / THE ONCE OVER / FEEL THE BERN in the E; and IAN MCKELLEN / ANTIHEROINE / SOONER STATE in the S. Whew! Those are all so good!

I enjoyed the 90s kid gimmes like CHUMBAWAMBA and SHE’S ALL THAT, and was delighted to learn that SHE’S ALL THAT is based on Pygmalion. My favorite genre of rom com is “modern adaptations of classic texts” (see also: She’s The Man, Clueless, 10 Thing I Hate About You, etc). I also enjoyed learning about (and then reading the Wikipedia page of) SPIRAL JETTY.

Overall, tons of stars from me for this ambitious and thoroughly entertaining grid. Have a good weekend everyone! 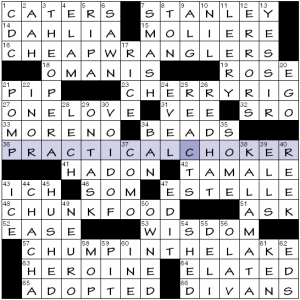 So aside from the—in my view—egregious central entry’s clue, these are pretty good and comprise a decent theme.

The Inkubator editors describe this as a “gentle” puzzle to start their new subscription year (and if you haven’t subscribed yet, here’s the place to go). I solved it easily and enjoyed it, and had absolutely no idea what the theme was until I started reading the theme entries out loud to my husband. Aha!

What did the cat say? 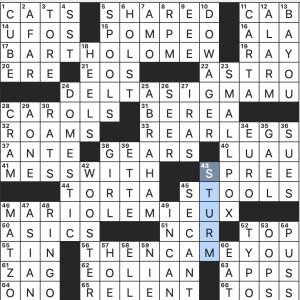 I scratched my head. I didn’t see cats hidden in the entries. I don’t know of any cats named MARIO. And the song title made no sense. So I started reading the theme answers to my husband – and we both realized that they all end in the sound MEW. You know, like the cat says. This is not my favorite theme, in part because THEN CAME  YOU requires a stretch to hear the MEW. It’s solid, though, and was fun to solve.

What I didn’t know before I did this puzzle: that OPRAH was a typo on her birth certificate.