Crossword Fiend statement of policy: If you’re just here to comment on the evils of “wokeness” and feminism and whatnot, do not be surprised if your comments are deleted. You’re a distraction. This is a site that (1) is about crosswords and (2) supports equality and justice for women, people of color, LGBTQIA people, religious minorities, people with disabilities, and other marginalized groups. If you don’t like that second item, you’re welcome to leave. We’re not interested in giving you an audience for your regressive (and invariably boring) ideas. 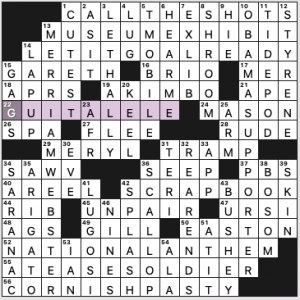 Sam makes space for the 12s, 13s, and 14s that usually won’t fit into a standard themeless grid. CALL THE SHOTS, MUSEUM EXHIBIT, “LET IT GO ALREADY,” NATIONAL ANTHEM, “AT EASE, SOLDIER,” and CORNISH PASTY (tell me the best vegetarian varieties) are crossed by an upright OBAMA SUPPORTER and MERRIAM-WEBSTER. These are all good entries, no?

Did not know: 7d. [Like a deaccessioned book, for short], EXLIB. EX-LIB? EX LIB? Short for ex libris or something else? Librarians, fill me in! 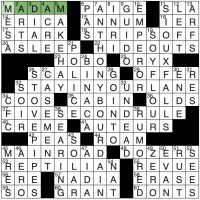 My good friend Peter Collins has this week’s Saturday LAT challenger puzzle. Nicely done! Not too difficult, and I used to have a supervisor that told me to 32-Across! I got started oddly enough in the SW corner of this grid after tackling the NW area. Then just sort of wound around and ended up in the upper central part. Not sure why. A fun solve, though. Hope you enjoyed it as much as I did. 4.4 stars.

That is all! Back to the MIT Mystery Hunt …. 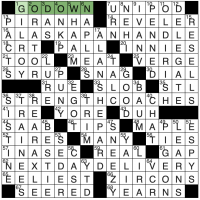 Well, we have week two of the slightly easier “Themeless Saturday” puzzle. This one wasn’t too awfully hard again, but I did find it fairly difficult. Finished right at 10 minutes, which for me is still a great Stumper time. It didn’t seem that way while solving, though. I distinctly remember, when finishing, thinking, “It has only been 10 minutes??” What I am trying to say, is, this was a good puzzle! I simply got lost in it somehow. As Paolo Pasco would day, I was “vibing!” (Just not as fast as he does it!) Nice puzzle, Stan! I learned a word or two! 4.6 stars. 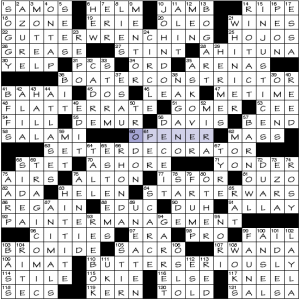 The ACTION alluded to in the title is putting IN the letters TER. Phrases are thus wackified.

These are … kind of dry, but serviceable.

THEME: The first part of a word means “half” and the second part of the word can be halved to find another word. That seemed difficult to explain. 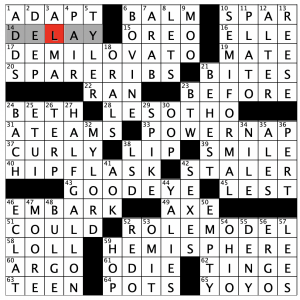 Really liked everything about this puzzle. Excellent and clever idea. You know it’s a unique idea when it’s difficult to replicate with other themers. I’m impressed at the finds.

Filled quite nicely too. HIP FLASK, GOOD EYE!, SPARE RIBS, MY LORD make up for the ETUI and ECLAT that I never see outside of crosswords.

Found out that OHIO is the seventh most populous state. I found that surprising. Also, there’s a five-letter POTUS whose name begins with T who besides the current one nicknamed “His Accidency.” Excellent name.