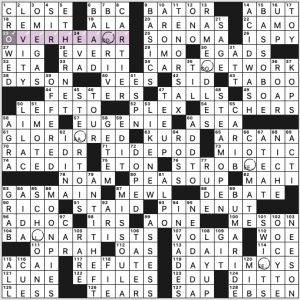 The quasi-rebus squares contain two pairs of doubled letters, which read in one order for the Across and the other order for the Down.

Solid theme. Much to my surprise, only one of the rebus squares I entered wasn’t accepted in the solution, but when I retried it as EEMM (might’ve been MMEE before? not sure), it was fine.

I had no idea about the theme until I hit the revealer so it played like a Sunday-sized themeless for most of the time I was solving. Since it’s C.C.’s puzzle, it was a smooth themeless.

The revealer at 119a is [Leaving the amateur ranks, and a hint to the starred clues]. It’s TURNING PRO. Each theme answer contains the string ORP – PRO “turned” backwards. 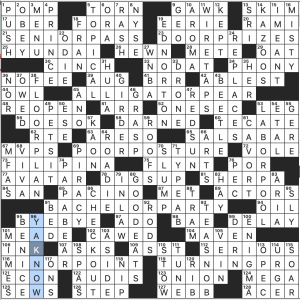 I didn’t realize until I typed them out that all the OR P strings cross the two words of the answer, which takes this construction up a level. Nice, solid, enjoyable Sunday theme.

He’s back! At least I assume it’s a he. We can typically look forward to two Captain Obvious puzzles per year. This time, he’s rather bookish. 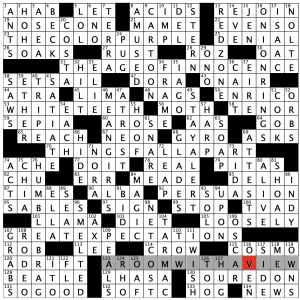 I can’t imagine anyone complaining much about a Captain Obvious puzzle. They’re so fun! Also, it’s usually a good time to go for a speed record. I finished this one in under 10 minutes, which is very fast for me as I’m usually in the 12-15 range. This is largely due to the cluing being so literal that several of the entries needed no crosses (THE COLOR PURPLE, THE AGE OF INNOCENCE, GREAT EXPECTATIONS, and A ROOM WITH A VIEW for me). PERSUASION, by Jane Austen, is the only work I’m unfamiliar with. Haven’t read it, though I like her a lot.

A few names tripped me up: GOB, MEADE, and ELIE, all fairly crossed, though I triple checked GOB because it looked so odd to me as a name. I personally think Judge ITO should be recused from crosswords after a solid run, but somehow he has endurance in the grid world.

Anyway, enjoyable all around.

Last week, I mused aloud my curiosity as to what the ratio of left/right symmetry was in his puzzles to rotational symmetry. He graciously answered. I was actually shocked to learn that out of 265 puzzles, only 30 have anything other than traditional symmetry. I honestly thought it was closer to half. I was WAY off!

Also, there is a fascinating story as to why Evan’s Captain Obvious character exists in the first place. I highly recommend the three-minute read. It was published on the Post’s website today.

SHOWS AROUND is the revealer at 117a [Gives a tour, say, or a theme hint]. The other theme answers have titles of musicals in the circled squares at their beginnings and ends. 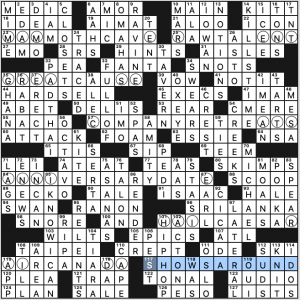 Solid theme and very good entries for the most part. The title is apt as well since each phrase has a “piece” of the musical at the start and the end.

Zhouqin always brings us great fill and today is no exception. My favorite has to be “I KNOW I CAN” [Self-motivational statement], but there’s also KILLS TIME, PAD THAI, HARD SELL, and SRI LANKA. 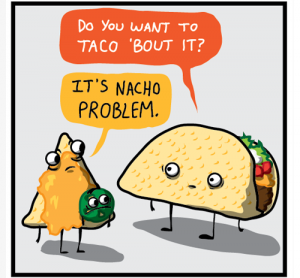