Note: Due to the holiday, there’s no WSJ puzzle today.

All the theme answers are American cities clued in reference to their European eponyms. 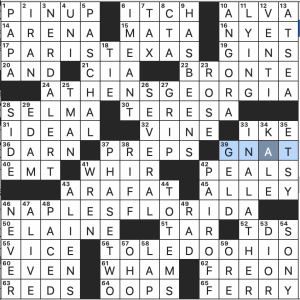 Fun! I don’t remember seeing this particular theme before. It was easy enough for a Monday, solid, smooth, and plenty enjoyable. Nothing objectionable jumped out at me from the fill. Nice.

What I didn’t know before I did this puzzle: that Virgil’s Tomb is in NAPLES, Italy. 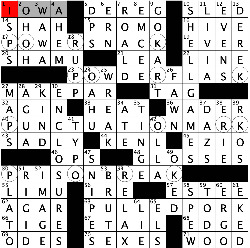 It’s good to know that Gail, whether by herself or with a collaborator, had some puzzles in the hopper when she passed away. I hope we have new grids from her for a while yet.

In this one, looking to the revealer at 63A [Shredded Southern barbecue dish that’s depicted in this puzzle’s circles] shows us that we’re dealing with PULLED PORK, which is very yummy, especially with pickles on a potato bun. Always nice to have an evocative entry like that. But what it means here is that the circled letters in the grid spell the word PORK each time — that is, PORK is being “pulled” across the theme entry. Although the O and the R are not consistently located within each theme entry, the P always starts the phrase and the K is always the last letter in the phrase, which is a nice extra touch of consistency from two constructors seasoned enough to deliver a little more care than strictly necessary.

Where, then, besides in between the two halves of a bun, might you find your PULLED PORK?

The fill in this puzzle wasn’t my favorite. DPS, BRUTE clued as a Shakespearean partial rather than the common noun, the partial DAZS next to RKOS, OLLA (although I wouldn’t mind it later in the week clued with a reference to café de olla, which is delicious), EKED, and ETAIL — with all that, this grid didn’t quite MAKE PAR for me. 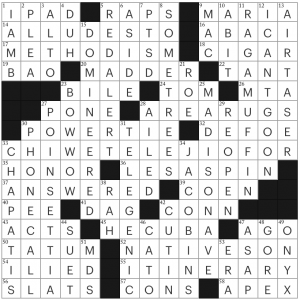 I really wanted to love this puzzle, and I very nearly do, but one section that is overly-dense with not-entirely-inferable proper nouns (which forced me to google!) knock this puzzle down a bit in my estimation.

I loved (but did not know) the central spanner CHIWETEL EJIOFOR [He voiced Scar in 2019’s “The Lion King”], and the rest of the long entries in the puzzle are also all super solid: ALLUDES TO / METHODISM / RAGAMUFFIN / I CAN’T GO ON / PHONE CALL / POINSETTIA / NATIVE SON / ITINERARY / MADISON AVE / DOMINEERED. I particularly enjoyed RAGAMUFFIN and its clue [Tatterdemalion], another thing I did not know but am delighted to have learned means “a person dressed in ragged clothing” per Merriam-Webster.

In terms of the solve itself, I flew through the entire western half of this puzzle in record challenging Monday pace, but I slammed to a halt on the Eastern side on basically everything that touched LES ASPIN. I’ve never heard of this person, and the name doesn’t parse in a way that is particularly intuitive (I assumed this was a woman named LESA SPIN until I finally gave up and googled). This name, in conjunction with CHIWETEL EJIOFOR, the (unguessable, for me) JACOBINS and DEFOE, my mistaken/bioethicist assumption that the [Hot-button verb in the COVID-19 era] was RATION instead of REOPEN, and a complete inability to parse SOME TREES (partly because I had entered METHODIST instead of METHODISM) made this section downright impossible for me. All of these entries, with the exception, perhaps, of the 1993-1994 Secretary of Defense LES ASPIN, are totally valid and excellent, but the crossings/proximity of alllll those proper nouns was just too much for me. But it’s a challenging Monday, so I suppose this level of difficulty is to be expected!

Overall, I like all the elements of this puzzle individually, but the combination of so many names/titles of things marred the solving experience a bit for me. Otherwise a lovely puzzle though!

Greg Johnson’s Universal crossword, “Before and After” — pannonica’s write-up 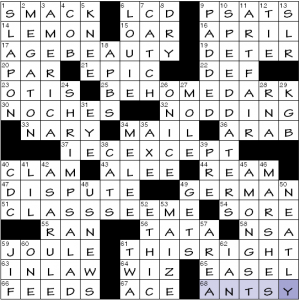 I was surprised when I finished and looked at the timer – I thought it took much longer. I stumbled around the top of the grid far longer than I should have, given that 15a was a gimme. There’s only one Sandman – the great MARIANO Rivera. This is a BEQ themeless so of course there were plenty of things I did not know. This whole post could be “What I Didn’t Know Before I Did This Puzzle” entry. I’ll restrain myself, though, and start with a list of some of the things I liked. 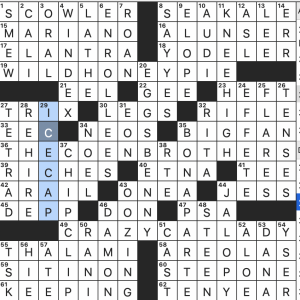 What I didn’t know before I did this puzzle, an abbreviated list: never heard of Peyton Elizabeth LEE or “Andi Mack.” Did not know that AL UNSER was the oldest driver the win the Indy 500. I’ve never met an EEL-backed flounder, which is OK with me. And I’ve never heard of DON Albarn.

I leave you with The Staples Singers, since it’s MLK Day and we all need some Mavis in our lives.