Title: “Double Meaning”
Prompt:The meta for this puzzle is a famous band.
Answer: U2 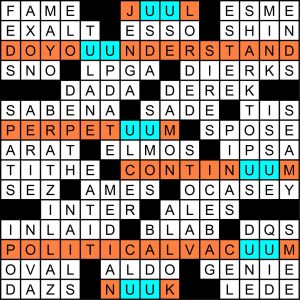 Season 10 of the Muller Music Meta starts now! Coming up on a decade of these beauties; I’ve enjoyed blogging them immensely, and thanks to Pete for producing them. Impressive that his ideas in the most recent seasons are as novel and intriguing and those of the first few seasons. Not an easy thing to engineer, but engineer it he has.

The opener for this season is a slow pitch right over the heart of the plate, a suitable confidence-builder for January. With over 600 correct entries so far, which I believe is a record, it looks like just about everyone knocked it out of the park.

The four obvious (by length) theme entries are:

But there are also a couple of bonus entries, much shorter:

5-A: [E-cig company whose name sounds like a well-known singer] = JUUL. The singer being of course Jewel (Kilcher).
64-A: [Capital of Greenland] = NUUK

So each of those entries contains two U’s in succession, making U2 our contest answer.

4.15 stars for a gentle beginning puzzle, but we all know he’s going to rev the engines up soon enough. I haven’t had a perfect year in quite a while, so I’m determined to make it happen in 2021. Who’s with me??