Superquick post because I’m in the middle of the MIT Mystery Hunt!

This week, we’re looking for a well-known animated movie. 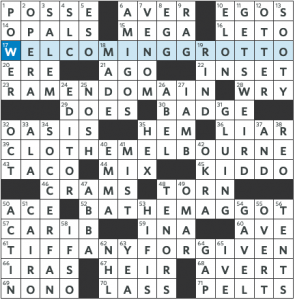 Let’s start with some nonsense-y themers:

First observation: If we “spoil” the endings of each word in the themers, we get the first two words of three-word movie titles from the year in parentheses:

COMING TO America
MEN IN Black
THE BOURNE Ultimatum (this is why the year is important!)
HE GOT Game
ANY GIVEN Sunday

Second observation: The first letters of the words that complete the titles spell out A BUG’S …

Third observation: Follow the pattern and complete that title with LIFE, for the 1998 Pixar film A BUG’S LIFE, which is a well-known animated movie and our answer.

Back to hunting mysteries …