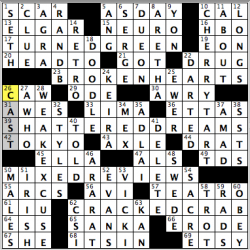 Good day, everybody! Hope you are all doing well and staying safe, as always.

Seeing today’s grid took me back to the first few times I ever solved puzzles and I encountered the all-caps clues. Can’t recall the actual answers at the moment, but always remembered not understanding what was happening with the answers, in relation to their clues, for the first two or three times doing them. Took me while to figure out those puzzles. Fast forward to today, and I’m now zipping through these types of clues.

In this edition, the letters in the clues of the theme entries are anagrammed at the back end of each of the theme answers.

Could not help laugh at the clue to WEAK EXCUSE, given that I cannot get the image of cats eating homework assignments and kids coming to school the next day to try and say that with a straight face (28D: [Lame explanation, such as “My cat ate my homework”]). I am sure that someone out there has legitimately had their homework, or some important project displayed on paper, chewed up by a pet. Hopefully, someone can share that experience, if it happened to you, so I can say that I know someone who has had it happen to them. There’s now a more-than-decent chance that the clue to MALES will be outdated in about four years’ time (50A: [All U.S. presidents, to date]). For a little while in the early 2000s, one of my big things I was into was buying RETRO sports jerseys, right before that got cool…and then faded out a few years later (14D: [Old enough to be cool again]). Unfortunately, because of a couple of moves and my absentmindedness, I can’t find the powder blue St. Louis Cardinals jersey that I bought all those years back. Might have to buy a Nehru jacket to make me feel better about that. Or not.

“Sports will make you smarter” moment of the day: TOKYO (42A: [Capital of Japan]) – Though I’m very skeptical that it takes place on time from a logistics standpoint (but the proverbial check clearing means it will probably happen, come hell or high water), the 2020 Summer Olympics, rescheduled to 2021 because of the global pandemic, is 187 days away from kicking off. The city of Tokyo was initially tabbed to host the 1940 Olympics, but that honor was stripped and moved to Helsinki upon Japan’s invasion of China. Because of the start of World War II, the 1940 Olympics were cancelled altogether. As a result, Helsinki was subsequently awarded the 1952 Games while Tokyo was eventually awarded the event in 1964. Those 1964 Games were the first Olympics, winter or summer, to be held on Asian soil.

Theme: Astronomically-related junk food. The revealer is SPACE JUNK (60a, [Orbiting debris, or a hint to this puzzle’s theme foods]). 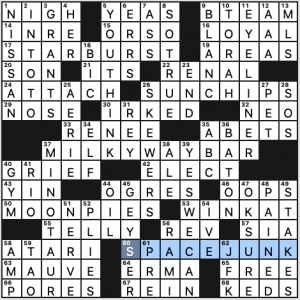 Fun theme. I like junk food and I like astronomy, so yeah, I enjoyed this theme even though none of these top my list of favorite junk foods. I do like how SUN CHIPS and MOON PIES are symmetrically opposite in the grid. 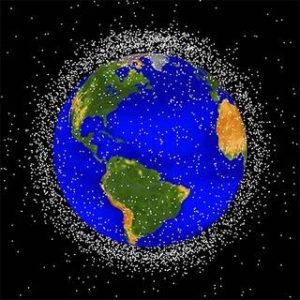 Are there other space-related junk food items? Sure, I can think of Orbit gum, Galaxy chocolate bars (though I think that’s just in the UK), and Mars bars (which apparently is an on-again, off-again thing). I’m sure there are others.

Oh, by the way, space debris in low earth orbit is a huge problem. According to NASA, there’s about 6,000 tons of rubbish floating around the planet. How does the International Space Station deal with potentially catastrophic collisions? They move out of the way.

Back to the puzzle. I struggled at the crossing of WINK AT [Allude to, cheekily] and “OK SURE” [“Fine, whatever you say”]. I first tried UH SURE, then OH SURE, but they both left me with WINHAT and there was no telling what that could be (other than wrong). It probably took a good 30 or 40 seconds to realize I needed OK SURE and that the crossing was two words.

Other than that stumbling block. I really like the fill. My favorite has to be MINOTAUR [Labyrinth dweller] followed closely by a snarky “YOU THINK?” and the optimistic “YES WE CAN!“(Happy Inauguration Day Eve, everyone!). EYELINER and SKEWERS add to the grid as well. 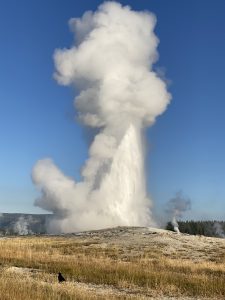 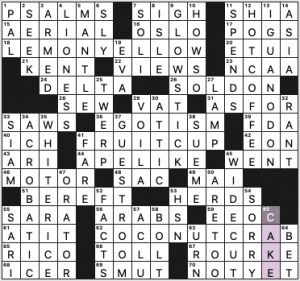 The name of the game is CAKE: 60d. [Word that can follow either half of the answers to the starred clues]. The starred answers are LEMON YELLOW (two good cakes), FRUIT CUP (fancy bakery cupcakes have too much frosting on them, and we won’t discuss fruitcake), COCONUT CRAB (gonna pass on both of those cakes, and gonna leave it to you to Google the coconut crab. Oh, what the heck—here’s an entertaining article), HOT COFFEE (hotcakes are pancakes, and coffee cake > coffee), and WHITE RICE (white cake is nice, but rice cake can mean a variety of non-dessert things). It’s a solid execution of this theme type, though not a type that I particularly care for.

Surprised to find Italian plural SOLI and crosswordese ETUI in a Tuesday puzzle. 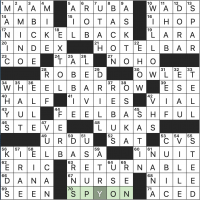 This time the Jonesin’ puzzle has a revealer (instead of the LAT, which normally on Tuesday has one), and it is helpful because I don’t think I would have caught on to what was happening without it. Even considering the theme! Here are the themers:

Yes, we have the letters ABLE backwards in the theme answers. If you caught this before the revealer, you’re better than I am at this. But it all ties up in a nice neat bow at the end, and also reminds me of when I grew up in Michigan and we took cans and bottles back for actual money! Do they still do that? I will have to check; I don’t think they do this anymore. But still a fun puzzle. 4.4 stars today.

Trying to recover from the MIT Mystery Hunt, so maybe I will sneak a catnap at my desk! More Jonesin’ next week. 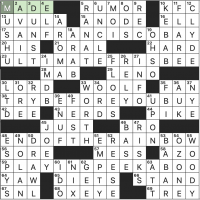 I wrote this up once, then accidentally deleted it! This theme wasn’t readily evident at first, and there is no revealer on a Tuesday! But it is simple enough once you take a quick look:

I have no idea what I wrote before! But I think I said something along the lines of the theme answers including the sounds bee, bay, by, bow and boo at the end. Great job getting 5 15-letter theme entries and still having good fill!