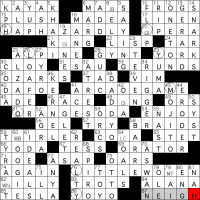 hello and welcome to episode #659 of matt gaffney’s weekly crossword contest, “Blank Stares”. for this week 3 puzzle, the instructions tell us that the answer is what you might say after you get the meta. okay. what’s the theme? there are eight different crossings in the grid where the across and down answers disagree:

okay, so what’s going on? for each of the squares with a conflict, you can take the two possible letters going there and make a two-word (or hyphenated) phrase out of one of the crossing words by using both values: JELLY BELLY, FLIP-FLOP, KING KONG, DING-DONG, BOOGIE-WOOGIE, COCA-COLA, MAI TAI, and WILLY-NILLY. sometimes it’s the across word that gets used and sometimes it’s the down word; sometimes the word is the first half of the resulting phrase and sometimes it’s the second. neither of those appears to matter.

what then? well, the seven resulting phrases can each be an alternate answer to a different clue in the grid:

taking the first letters of the answers to these eight extra clues gives HOLY MOLY, which is the meta answer. it’s not what i said when i figured out the meta, but that’s because i was still confused about the DING DONG thing. but it’s a really good meta. i have to admit that i don’t understand the title, though. what was it supposed to mean?

i didn’t get around to this one until after mystery hunt, and perhaps sleep deprivation over the weekend is why it took me a while to actually fully grok the theme. but it’s a lovely puzzle, and i wish i’d left myself more time to write up my thoughts about it. how’d you all like it?