Happy Inauguration Day! It’s a day to be hopeful and optimistic, so in that sense, maybe this puzzle would have been better yesterday, the last full day of America’s worst president.

Our theme is a list of sayings describing the “evil that lurks in the heart of men.” 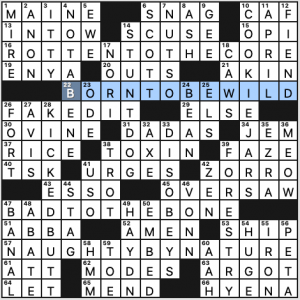 Good theme (ironically), even though one of the entries has to be interpreted a little loosely.

With only four themers, the fill is strong, especially COOKIE JARS, KICKED BUTT, STUNT DOG, FAKED IT, and FORESTRY clued [Wood working?]. In the trickier-but-still-good category is the phrase NOTA BENE [“Pay special attention to this”]. Did you have trouble parsing that one? A hint that this was a Latin phrase would not have been unwelcome. 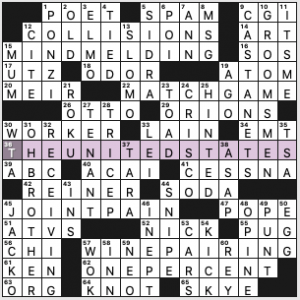 Our Inauguration Day revealer is THE UNITED STATES, 36a. [Red, white and blue land … or what 15-, 22-, 45- and 57-Across feature?]. Those four themers are rendered so well: one word that connotes uniting and one word that can be split into two state postal abbreviations. 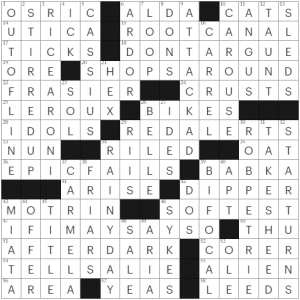 This was a super smooth solve! It wasn’t *easy*, per se, but I never felt stuck— each time I reached a stopping point, I was able to pick right up on a different section of the grid until the whole thing clicked together beautifully.

The long entries weren’t exactly groundbreaking, but that they’re all solid and stack nicely. My favorite sections were the across stacks in the NE and SW: ROOT CANAL / DON’T ARGUE / SHOPS AROUND and IF I MAY SAY SO / AFTER DARK / TELLS A LIE. We also had OUT OF LINE / STIRRED UP / RICE-A-RONI in the NW and ROB PETRIE / TAKES HEED / STAR TURNS in the SE. I have never watched the Dick Van Dyke Show (surprise!), so ROB PETRIE took me some time, but the rest was, like I said, pretty darn smooth.

Overall, enjoyable and smooth but not-quite-exciting puzzle. Many stars from me. Happy inauguration day, folks! 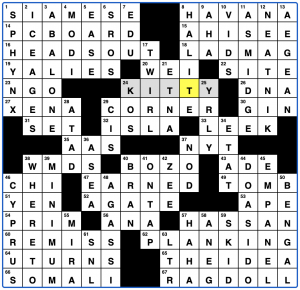 After MIT Mystery Hunt last weekend, today’s AVCX was a nice, gentle re-start to solving more puzzles, with an adorable theme.  It’s all spelled out in 24A and 29A:

As this suggests, each of the four corners of the puzzle contains two different cat breeds:

Other things to like in the grid: the cluing on LAD MAG (18A, “Racy periodical usually aimed at straight chaps”), Ai WEI WEI, PLANKING, NEATNIK, A SMIDGE and A TAD clued as measuring spoons, and DO AS I DO 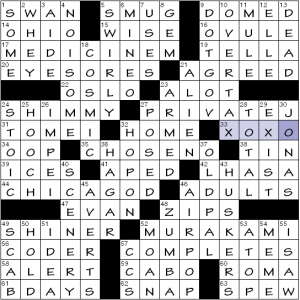 The answers to starred clues have the property of reversing over themselves for the last two letters. Since they are all two-word phrases possessing a three-letter word as the second word, they can be described by the title.

Another, probably less useful, way to think about it is that the answers end in a palindromic five-letter sequence, with the final two letters missing.

Good theme in concept and execution. Seven entries, reflecting and allowed by the shorter length of these answers.

I’m not a Bruce Springsteen fan, but I’ve always thought this album and song were better than most of his schtick, so here we go:

(Yes, I’m aware that most of his fines don’t care for this album, or at least didn’t at the time.) 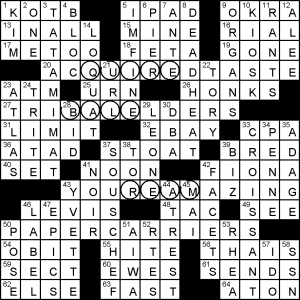 I’ve never heard the phrase PAPER CARRIERS, but I assume it’s a gender and age neutral form of paper boys/girls. In any case, three amounts of paper – a QUIRE: 25 sheets; a BALE: 5000 sheets; and a REAM: 500 sheets, are hidden across two parts of three otherwise unrelated entries.

[Ticket stub abbr.] for SECT, which is also a word, which seems by far the better clueing angle.