Ah! A good rebus puzzle to sink our teeth into!

This one features a {JACK} IN THE BOX (68a, [Toy that appears several times in this puzzle]) throughout the grid. 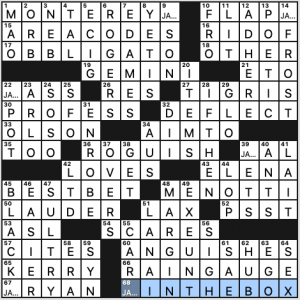 I was certain I’d seen this theme before, probably in the NYT, but digging through the cruciverb database I only found a 2007 NY Sun puzzle and a 2004 Philadelphia Inquirer puzzle, and I’m certain I wouldn’t have done either of those. Maybe you all have a better memory than I do or maybe I’m completely off base.

Regardless, this was a solidly executed—and fun—rebus, even though I caught on to it early on. The JACKs are not quite symmetrically placed, giving us just that little bit of an extra Thursday challenge. And the title is just perfect.

It’s a bold move to put the nine-letter revealer in the very last row, thus requiring stacks of nines in both the SE and NW corners. But they’re handled beautifully with only a few gluey bits (SAE and TAL). I struggled with the double-B in OBBLIGATO [Integral instrumental part], but what a lovely, crunchy word to have in your grid.

Conversely, it’s that middle section which has the kludgiest mash-up of fill like DII, AUS, AIM TO, and ROGUISH (not to be confused with “roguelike“). Elsewhere there’s a lot to like such as BEST BET, TIGRIS, and MENOTTI.

A very good example of a rebus puzzle. Four stars from me. 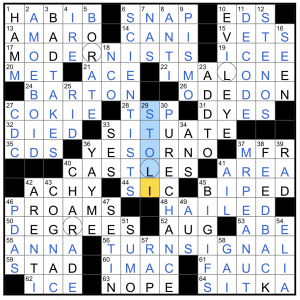 Today’s NYT needs is one of those grids where words start getting put in with 90 degree turns, though you can’t tell just by looking on the right, as MODERNISTS, I’M ALONE, CASTLES, and DEGREES all feature circled squares, but read normal from left to right.  When you look at the clues around those squares, however, it’s clearer what’s happening under the surface:

Each circled square acts as a TURN SIGNAL, telling you which way to go (L or R) in continuing to put an answer into the grid.

It feels like this was 3 years ago, but MR PEANUT died at the Super Bowl last year and became Baby Nut.

The first woman (co)constructor of the Fireball year is Team Fiend’s own Rachel Fabi! I hope the constructors enjoyed collaborating as much as I enjoyed solving this one. 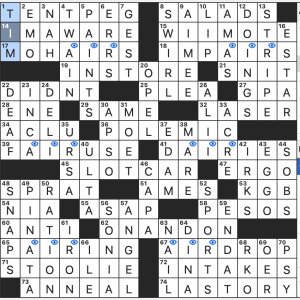 I want to stand back and admire that for a while. (counts on fingers) That’s 18 words involved with theme in a standard 15×15 grid. And yeah, there’s some crosswordese in there and I don’t care enough to point it out because the puzzle is overall so awesome. Thanks to Rachel, Christopher and Peter for this gem.

What I didn’t know before I did this puzzle: see above about the PESO. I also did not know that TIM Horton was in the hockey Hall of Fame. I only know the doughnuts (we have a Timmy’s outpost here in Allentown. At least we used to before the pandemic. Haven’t been down that way in a while). And I forgot that AIMEE Lucido wrote “Emmy in the Key of Code.” AIMEE is one of the bylines that always makes me smile on a puzzle, and the Kirkus review of her book sounds wonderful. 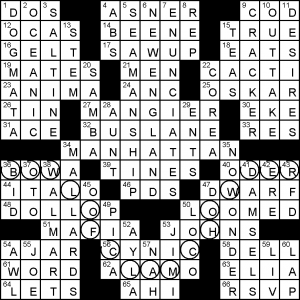 This puzzle’s theme is one I know very little about. I’m not sure if the black squares and circles are supposed to look like a bowl, or just a regular space invader. In any case the circles spell out BOWLOFCLAMCHOWDER and apparently you get a red one from MANHATTAN and a white from NEWENGLAND. And you eat it with a single SALTINE/CRACKER, which seems a terrible idea. Adding crunchiness to soup is not something I can comprehend as working.

It was a good thing BOWA/OTO was triple checked cos that’s a difficult crossing!