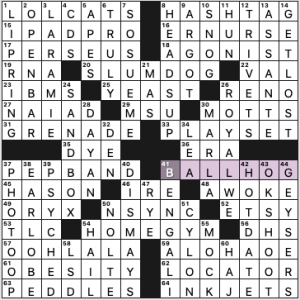 (When’s the last time there was a themeless NYT puzzle by a woman? It feels like it’s been awhile.)

I was surprised to finish this puzzle in under 4 minutes, since I kept mistyping things and had to fix my answers along the way. I assume that lots of folks might have set a speed record on this puzzle, and that the mega speed demons like Stella, Tyler, Dan, et al., might have ridiculously low times close to 2 minutes. (But you do you. Whatever way you like to do the puzzle is great! No need to time yourself if that doesn’t interest you.)

The puzzle opens with a retro vibe, since LOLCATS are very dated on the internet scale of time. My 20-year-old son says LOLCATS were big when he was in 7th, 8th grade. These days? Well, a great many of the memes circulating since yesterday feature Bernie Sanders doing his Vermont dadcore look at the inauguration, sporting a sensible parka and a cozy pair of patterned wool mittens. This, of course, will be passé by next week. The CDS in a tower at 4d is also dated. How many of us who still have music CDs are storing them in a tower rack?

Often themeless puzzles that are packed with 7s feel rather dull to me, but we do have some zing here. Fave fill: HASHTAG, IPAD PRO, E.R. NURSE, PERSEUS, BALL HOG, HOME GYM, LIP RING, PSYCHED, SANDBOX, BENGALI, and GEYSERS. On the down side, AGONIST, LOCATOR, EARLOBE, and assorted spoken phrases that we’ve seen in a number of puzzles before.

3.75 stars from me, minus more for that terrible clue. 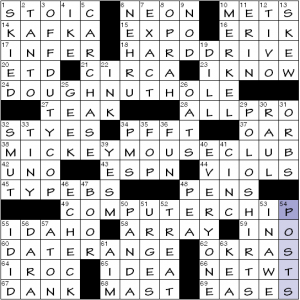 There have probably been dozens of golf-pun themed crosswords, but I’d wager some of these reinterpreted answers are new.

These are fairly good, but it’s hard to get excited about the theme.

Good morning and happy Friday, folks! I want to start this post by expressing my solidarity with the New Yorker Union’s 24 hour work stoppage that ended at 6am this morning, which is the same time this puzzle was released. Their union is organizing to demand fair wages and an equitable salary structure at the publication. You can read more about it here. 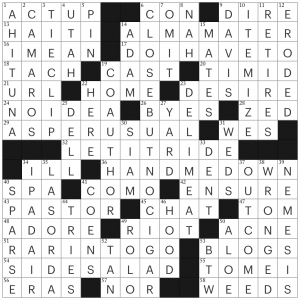 Unlike inequitable pay structures, however, this puzzle was super fun! I loved the long entries and the cool sort-of-stack through the middle, but the thing that always stands out for me in Caitlin Reid’s puzzles is the cluing voice. I just find her clues so funny and accessible (especially on Fridays), and I enjoyed the heck out of solving this puzzle.

The marquee entry today, positioned (unusually) as a down, is CLOSE BUT NO CIGAR, a fun phrase that I am now going to look up to learn its origins. Ok, apparently it comes from the early 20th century, when carnivals would hand out cigars as prizes at game booths. I love that!!! Not giving out cigars at carnivals, don’t do that, smoking is bad for you etc, but what a colorful phrase and fun origin story! Other colorful phrases in this puzzle include: DO I HAVE TO?! / AS PER USUAL / LET IT RIDE / HAND ME DOWN / RARIN TO GO. All crunchy, in-the-language phrases with pitch-perfect clues, including my favorite, [“Ugh, is this really necessary?”] for DO I HAVE TO?!. I’ll list more favorite clues below, but wanted to flag in this main text that first runner-up is [¯\_(ツ)_/¯] for NO IDEA.  A few years ago I taught my phone and computer to autocorrect the word “shrug” to  ¯\_(ツ)_/¯, and I have no regrets.

Overall, I loved this puzzle. Such a smooth start to the weekend! All the stars from me.

College puns! But wait, there’s more. Each one is related to the cost of higher education. 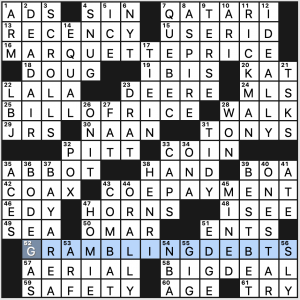 I love a nice, tight theme. It wouldn’t be so hard to come up with phrases based on college name puns, but to link them together with an additional constraint adds to the constructor’s difficulty and the solver’s payoff. 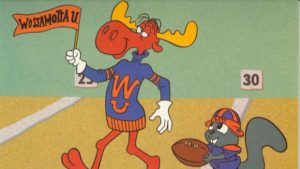 I also like the fact that with an 8-letter central revealer, the two 14-letter entries are placed in the third and thirteenth rows (as opposed to the fourth and twelfth rows). This results in the slightly unsightly columns of blocks in the NE and SW corners, but it allows for more breathability in the center of the grid.

That said, we don’t get any long extra-sparkly fill (mainly because of that split central revealer), but Erik makes good use of his 6s and 7s, such as Alan RICKMAN, DEAD AIR, QUEBEC crossing QATARI, BODEGAS, BAY AREA, BIG DEAL, and BEST BET. I also liked learning RECENCY [___ effect (memory bias toward items at the end of a list)].

This is a fun puzzle. I didn’t find it particularly challenging, and that was OK. It’s been a long day and I was happy to have a relaxing few minutes of solving. I’ve done Jenna’s puzzles before so I was surprised to realize she didn’t have a tag for our blog. That’s because she’s previously contributed to Queer Crosswords and the Puzzle Society. Welcome to Fiendland, Jenna!

There’s something about the NW stack of POSTPUNK, INTERPOL, and CONTESSA that’s very appealing. It sounds like the summary of a very cool neo-Noir film. 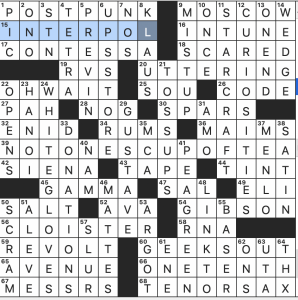 What I didn’t know before I did this puzzle: never heard of any of the POSTPUNK bands mentioned in the clue for 1a (Priests, Preoccupations, and Protomartyr). Also did not know that MOSCOW has the busiest metro system in Europe or that INTERPOL‘s emblem features a globe and scales.