Interesting article on the NYT crossword, its resistance to change, and the drive for more representative diversity in the puzzles and their bylines: https://studyhall.xyz/how-the-new-york-times-crossword-became-too-big-to-fail 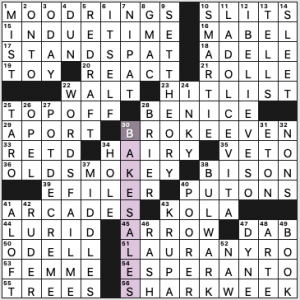 I’m a big fan of both Doug and Brad, but dang, another week of all-male bylines for the NYT’s themeless puzzles. (Four weekends in a row in January.) The New Yorker provides a steady stream of themelesses by women, at least.

Fave fill: MOOD RINGS, BROKE EVEN, OLD SMOKEY (who’s hearing “On top of spaghetti, all covered with cheese, I lost my poor meatball when somebody sneezed”?), SHARK WEEK, POT DE CREME, “WORDS FAIL ME,” BAKE SALES, LA DOLCE VITA, “I BELIEVE SO,” and BULWARK. (On my HIT LIST, and in a bad way: APORT, RETD, NIP AT, ARTE, plural foreign NONS, ARTE.) 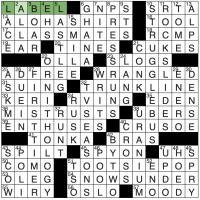 This is probably as close as my LAT and “Stumper” times have ever gotten. My normal LAT times are usually between 5 and 7 minutes; but this seemed to me like a true Tough as Nails puzzle from her site (you can find it here, but remember: they are HARD!). This one took me nearly 10 minutes! Again, I hope I am not coming across in a haughty way; I know a lot of people struggle with a puzzle like this for quite a while. But there are solvers (like Stella!) who would slice through a puzzle of this difficulty in 3 or 4 minutes, so I understand how you feel. But in comparison, this is a bit tougher than I have found LAT Saturday puzzles over the last few years. If this is intentional, and the puzzles are going to be designed to be a little thornier, I am all for it. I have always thought these were a tad too easy. But they have always been themeless puzzles with smooth fill, and this one is no exception. You do have to know a few crossword-y words to get through this one, but they are rare, and it is also filled with a lot of good stuff. Suffice it to say I loved this puzzle. Can you tell by how I am rambling? 4.8 stars from me. 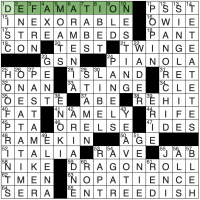 Another time under 10 minutes! I’ll take it! As I have stated previously, this is still a HARD puzzle, but I don’t find it as thorny as it was. As a barometer, the Boswords Themeless league puzzles are now overall a few shades tougher, in my opinion. I had no success in the NW to start, but the SW fell fairly quickly, then the SE, and then I just worked my way up and finally ended at the beginning. I actually was a little surprised when I got to a point where I was nearly done and the timer only said 8 minutes or so. That means I may have gotten slightly lost in this puzzle, and that isn’t a bad thing. 4.4 stars from me! 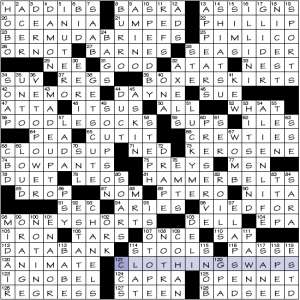 78a [“It Takes Two,” aptly] DUET. Each of the theme answers is a two word phrase naming an article of clothing. The twist is, per the revealer at 121-across [Bohemian wardrobe-enhancing events, and a hint to this puzzle’s theme] CLOTHING SWAPS, partners are moved around. More specifically, the second words shift down one, with the final entry wrapping around to the start.

Good solve, and some solid representation throughout the fill. 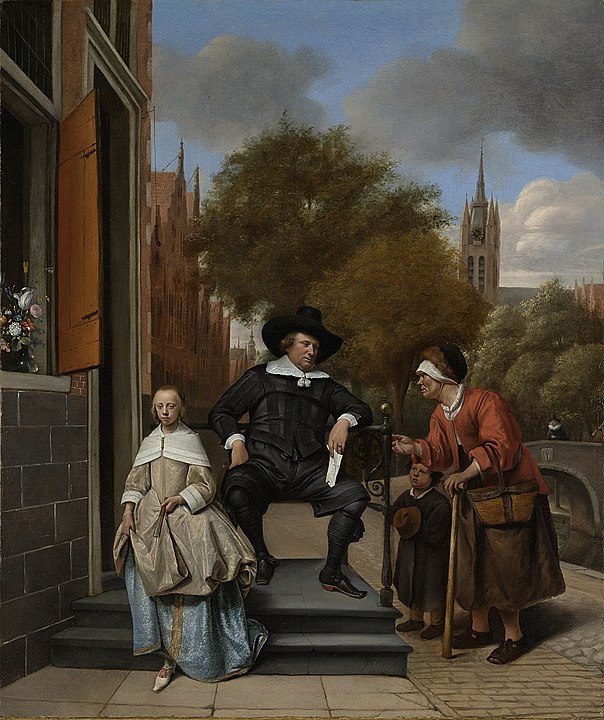