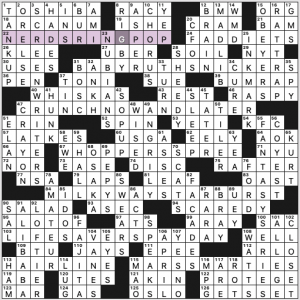 I love this theme! As the title suggests, each themer is two sugar-providing candy brands combined into a fake phrase with a plausible clue:

I don’t know about you, but I have eaten every single one of these candies. I found the theme to be lots of fun. Also, if you come across sugar-free versions of these that are sweetened with stevia, let me know!

I had to abandon this write-up early on because dinner was ready, and now it’s over an hour later and I don’t remember any fill or clues that I might’ve wanted to comment on. Let’s poke around and see:

The fill is highlighted by the excellent SCREENWRITERS and a FANTASY SERIES.

This collab marks Lucy’s debut puzzle in the venues we cover. I would not be surprised if she’s published USA Today puzzles already, given how many women Erik Agard publishes.

Four sweet stars from me. I appreciate having a playful theme.

I don’t mind anagrams on their own. I do the Spelling Bee pretty much every day. I do not like anagrams in my crossword puzzles. I realize that’s a matter of personal taste and I know that anagram puzzles can be good puzzles. This one has a bad theme entry, a significant dupe, and lackluster fill. So it’s not just the anagrams.

I didn’t bother to try and sort out the anagrams until I got to the revealer. I saw them, I knew they were anagrams, and I ignored them, which didn’t impede my solving one whit. The revealer is at 120a [Sci-fi creatures who arranged each set of circled letters?]. They’re SHAPESHIFTERS. For this performance, the circles will be played by the color red. 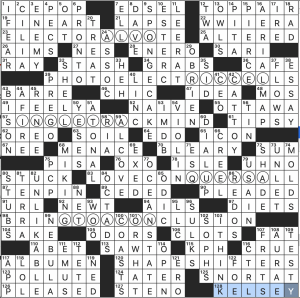 The dupe is at 50d, where we have [Vote for] in the clue for YESES. It’s a dupe of a theme answer. Not a good look.

I’m not sure [Eye lustfully] gets across the misogynistic creepiness of LEER AT  but at least it acknowledges the sexual nature of the term.

My eyes are BLEARY and this puzzle made me a bit TESTY, so I’ll skip to what I didn’t know before I did this puzzle: never heard of Linda KELSEY and didn’t know she won an Emmy for “Lou Grant.”

I suppose as a TEACHER, I can become a professional CHEATER if the theme of this puzzle is any indication of my future. 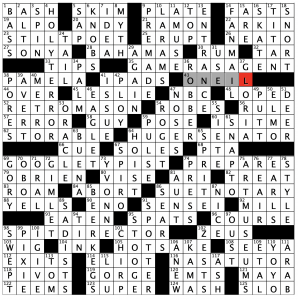 Well, I’d be lying if I said this is my favorite type of theme. It immediately reveals itself and then it’s just a matter of working through the clue carefully. I think this is a good one to introduce grids to newer solvers, especially since they can use the crutch of determining which letters of the anagram have or have not been used in order aid with the fill, but on the couple of occasions I tried to do that, I gave up and figured the crosses would do it for me.

It does follow the rule of “Go Big Or Go Home” on the wackiness. I mean… SUET NOTARY? That’s out there. They’re all pretty out there. I had the most difficulty parsing GAMERA’S AGENT because I thought the clue was referring to a game system of some sort. GAMERA doesn’t have the same name recognition as, say, Godzilla for me!

So, for me, I had the most fun with the fill clues on this one. Some solid trivia and clever wordplay, as well as some new names. ANDY Serkis, RAMON Navarro, SONYA, Soledad O’BRIEN, YVONNE Orji,

MAYA Angelou made an appearance too, which made me wonder… how long until Amanda Gorman makes her grid debut?

A pretty tame January so far. I suspect we’ll be thrown a curve in the next week or two.

THEME: The word DOOR is “busted” in common phrases (one half at the beginning of the phrase, the other at the end) 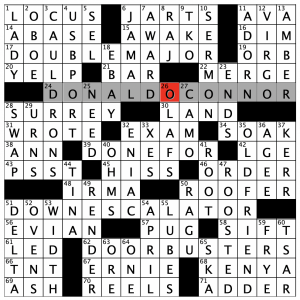 Breezy puzzle today! I hadn’t realized what was going on until I got to the revealer. I mean, that’s the definition of “revealer,” right?

DONALD O’CONNOR was new for me, though the name is very inferable and fairly crossed. DOWN ESCALATOR makes me think of only one thing… a certain entrance that someone once made. Thankfully, that someone I’ve been thinking less and less about in the last five days.

I found it odd that the clue for JARTS gave away its first letter, especially since it’s fairly common knowledge (I think?) and fairly crossed as well.

Overall, right over the plate. Thanks for this one!

Theme: IN is in. Today’s theme answers are well-known(ish) phrases with IN added to them. 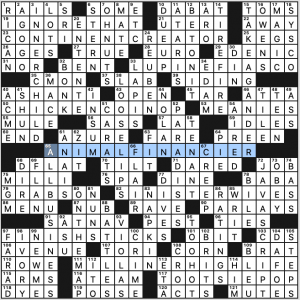 “Animal fancier” turned me off on this theme, and when that was followed up with SINISTER WIVES, which I can’t find any redeeming value in, that about did it for me. In truth, the theme is solidly executed—I especially liked LUPINE FIASCO—and I’m sure other people enjoyed it more than I did.

In the fill, I like IGNORE THAT even though “scratch that” sounds more familiar. TAKE A GANDER, ALL-BUSINESS, LOOSE LIPS, INNER CHILD, and TOOTSIE POP are all wonderful. JAVASCRIPT and ON THE MAP are strong as well. I never heard of a TIRE FIRE; I didn’t know that was a thing.

Really, a solid puzzle, but parts of the theme didn’t work too well for me. 3.4 stars.