I enjoyed this puzzle. I didn’t grok the theme until I got to the revealer and I didn’t take the time to go back and look at the theme entries until after I finished, and it made me smile. The puzzle is smooth and Monday-appropriate. The only thing that got in my way was my own typo.

The revealer at 62a [Dreaded cry from a boss…or a hint to the ends of 18-, 23-, 40, and 53-Across] is YOU‘RE FIRED. I won’t gloat about someone who made that phrase famous and was recently fired himself. OK, maybe just a little. 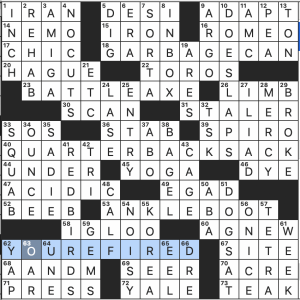 CAN, AXE, SACK, and BOOT are all synonyms for FIRE. Nice, solid, Monday theme. All the entries are clearly in the language and the revealer ties it all together.

What I didn’t know before I did this puzzle: see above re: Calhoun (although that’s peripheral) and I also didn’t know that Shakespeare’s “Troilus and Cressida” was based on the Iliad. Seems like I should have known that, but I didn’t remember it. 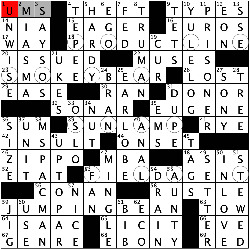 This puzzle is full of beans! No, I’m not saying it’s nonsense (and today I learned that to be “full of beans” can also mean to be energetic and lively). I just mean that it’s a theme o’beans. Go to the revealer at 59A [Tumbling seed, and a hint to each row of circled letters] and you get JUMPING BEAN. And if you have a look at the circled letters in each theme entry, they spell out a type of bean. The beans are “jumping” because the letters aren’t in adjacent squares.

Anyway, this theme didn’t quite do it for me. I wonder whether it would have been executable with different varietals of bean, and using only common American English ones. FAVA, LIMA, MUNG, PINTO come to mind as possibilities.

The fill is pretty good — MS. PAC-MAN and YULE LOG were favorites for me — although I do wish the NW corner were a little easier. You don’t always have to start a puzzle at 1-Across, but lots of people do, and I think on Monday it’s kind to solvers to let people get a foothold right away. Instead, you have 1A [Hesitant sounds], which could just as easily be UHS or ERS as the correct UMS, a knowledge-based clue right below with NIA Long, and not necessarily Monday-easy 6s crossing with UNWISE, MIASMA, and SAY-SOS. All legit fill, but it adds up to a slightly slower start than I expect on a Monday, and in my case definitely led to a longer overall time than usual at 2:22.

It’s a timely debut today, as the new president is trying to get his cabinet members sorted out. As for us, our cabinet members are phrases where the last word is a piece of dinnerware. 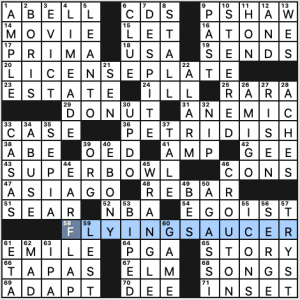 Cute. Nothing groundbreaking, but that doesn’t mean it’s not enjoyable. It’s a clean, straightforward, fun theme just right for getting the week off to a good start.

The fill is good, but to be honest, it seems like it should be sparklier with only four theme answers. Part of the issue seems to be that the 13-letter themers are in the fourth and twelfth rows, pushing all the themers toward the center. An alternative would be to put the 9-letter themers in the third and thirteenth rows and put the bigger ones closer to the middle. That might free up some space and allow for some fun long Downs.

But what we get is still nice, especially WRANGLE, EARFLAP, ASIAGO, and CROUTON (all of those being in the bottom half, curiously).

Only one clue of note: 40d. [Magazine named for a “fine black wood”]. EBONY. I assumed the quoted words are from somewhere, but I can’t find the source. Anyone? 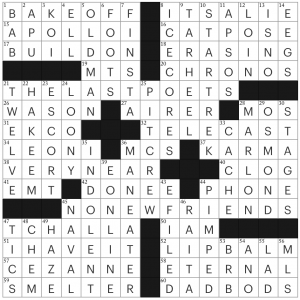 Quick write-up today! This was the easiest challenging New Yorker I think I’ve done to date, coming in just over what I imagine is my Friday average. This puzzle is fun and clean and has some lovely clues that made it fly by for me.

The long entries today include THE LAST POETS / NO NEW FRIENDS / INDOLENT / MAN-EATER / ICE CORES / STAR TREK. I didn’t know THE LAST POETS [Black Nationalist spoken-word collective whose work was a precursor to hip-hop], so I did some googling and wow, how did I not know THE LAST POETS?? This is an excellent entry that is New Yorker-worthy in its cultural cachet. NO NEW FRIENDS is also great (although, for the record, I am personally available for new [internet] friends after spending a year in my house with no [IRL] friends at all!) 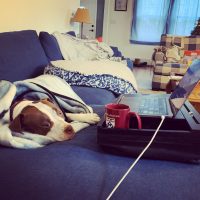 Overall, tons of stars for a smooth solve to start the week. See you Wednesday! 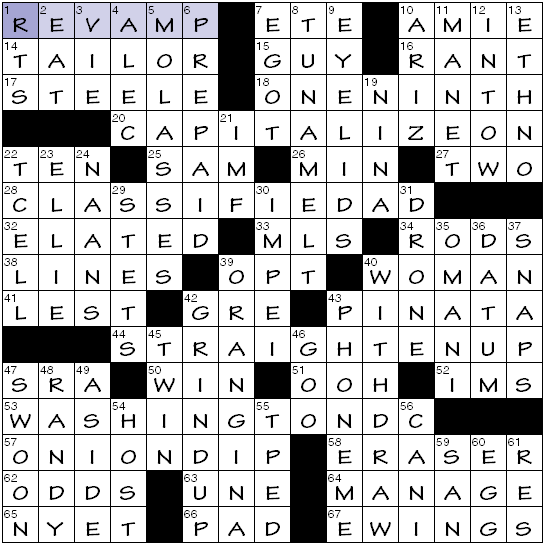 I’m torn on this one. It’s a theme concept I haven’t seen before, but the impetus for it is based on outdated information. The TWIN (45d) revealers are located unusually, but there’s a very good reason for that.

Note that these entries appear in their appropriate positions, were the grid a clock face.

As for the theme answers themselves, it’s nothing more elaborate than being 12-letter phrases in which the first word is ten letters long and the second is but two letters.

Problem is, the National Highway Traffic Safety Administration quite some time ago (1a) REVAMPed their guidelines for proper hand placement on steering wheels. No longer is ten-two advised. Perhaps Nate has made a weak concession to this by using the adjective ‘traditional’, but combined with the title—”Drive Safely”—it promotes an incorrect and potentially deleterious message in a public forum, which strikes me as less than ideal. As a result, it’s difficult to recommend this crossword, despite its cleverness.

Very quickly before my 12:30 meeting, here’s the grid and a few things I noticed. 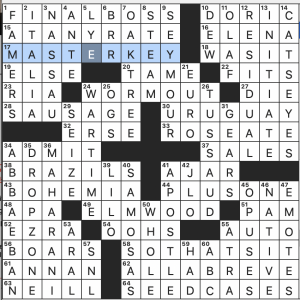 What I didn’t know before I did this puzzle: that Oliver Sacks was ABBA EBAN‘s cousin. I also didn’t know that EZRA wrote the book of Chronicles. There was also a tennis player, an airport, and a director that were new to me – no time to hunt them down.