This week, Mike wants us to find a six-letter word related to music. 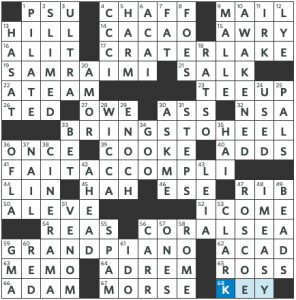 There are some themers that don’t appear thematically related, and one key entry.

First observation, to which I was led by the title: Six of the clues, including the aforementioned, end in “notes’:

Second observation: if you anagram the last letters of those entries (i.e. their “endnotes”), you get MELODY, which is a six-letter word related to music, and our answer.

WAIT, do not post a comment telling me, whom you have decided is clearly the world’s worst metapuzzle blogger, that I missed a step. I know! It is totally not Shenk-y to leave solvers to anagram in order to get the meta. There needs to be another chunk of information to extract about how to reorder those “endnotes.”

Solving pal Gideon hadn’t quite gotten the meta, and was sharing notes with me. “I have the scale from the themers, but I don’t know what I’m supposed to apply that to.” Me: You have the what from the whatwhats? Ohhhhh. Turns out, if you take the last letters of the themers (their “endnotes” as it were), you get: RE MI SOL TI LA DO. Then, remembering that the KEY of C is apparently helpful, let’s look at that key:

The step I missed was to rearrange the entries from the “endnotes” clues according to the order of the themers:

And there you have the last letters — the “endnotes” yeah — in order spelling MELODY. Whew! That was complicated! Time to relax and thrill to the pomposity of a 1950s movie announcer as he expounds on the glories of [38d: “How the West Was Won” was shown in it]: CINERAMA.