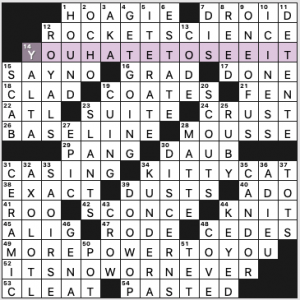 I love this puzzle! This is a particularly good weekend for NYT themelesses. Nam Jin Yoon fills his grid with some zippy long conversational phrases, and you love to see it. (That’s the opposite of “YOU HATE TO SEE IT,” which is something you might say when the quarterback you most loathe manages to lose the Super Bowl, or when some jackass who cut you off on the highway gets stopped for speeding.) I just read somewhere a mom saying that she uses “brain science” and “rocket surgery” instead of the usual “it ain’t ROCKET SCIENCE here.” “MORE POWER TO YOU” is useful, but “IT’S NOW OR NEVER” has really been pretty useless this past pandemic year, when hardly anything can actually be accomplished “now.”

Other fill that caught my eye: The AXOLOTL, which was slandered as an “ugmo” (it’s not! it’s adorable) on this week’s Full Frontal With Samantha Bee. HOAGIE, even though we call ’em subs in Chicago, possibly because my husband has a cousin overseas named Hoagy. Ta-Nehisi COATES. Pie CRUST, preferably with butter like they use at Hoosier Mama Pie Company. KITTY-CAT, at a distance. GET GOING, ONE OF US (which you can chant rhythmically when you find a kindred spirit who also prefers the 0.9 mm leads for a mechanical pencil).

4.5 stars from me. Really a fun puzzle, not too hard but not overly easy, either. 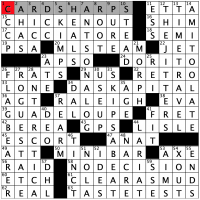 I took my time this week! Or maybe the puzzle was harder? I spent a few minutes watching Tyler Hinman’s Twitch stream on Friday night, and he flies around the grid using the arrow keys, which I don’t do. Perhaps I should practice that; hard to teach an old dog a new trick though! This wide open grid seemed to have just a little more bite than normal, but that is ok with me. Joe Deeney is another person who I don’t think I have ever met, but if we ever have live tournaments again, I would love to say hi to him. Another wonderful themeless by Joe today; 4.5 stars.

I will stop there. I have a jigsaw puzzle that is calling my name … 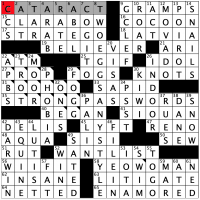 This one felt like a real old-timey Stumper this week! OK, I am really tired this week, so perhaps that is my story. That error-ridden section in the west central portion of the grid gave my all kinds of fits and starts. I suppose if I would have figured out 31-Across before I did it may have gone better; all of my first hunches were correct! And I am not gonna lie: not getting 58-Across is just embarassing. For explanations of both, see below. I will take the harder puzzle this week, but I think this is more of a case of I am totally out of it! I will take a nap before Sunday’s Winter Wondersolve or I will be no good at that either! 4.4 stars today.

Everyone have a safe and healthy weekend. If you live in the upper Midwest like I do, watch out for the coming snowstorm Saturday night and stay safe!

Whether or not you like this puzzle, you can’t deny that it’s a hit! 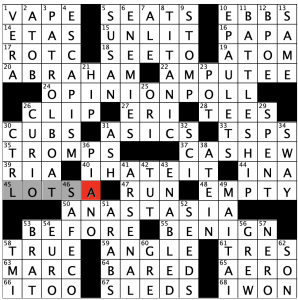 Answers to starred answers are letter/number combos, as one may see in the game Battleship. They are:

Thoroughly enjoyed this. Especially since it took so long for the whole puzzle’s theme to come together for me, which led to a solid b. I vaguely recall seeing a Battleship theme before, but I can’t remember where. Pretty sure it wasn’t this puzzle though (I believe Universal is still currently printing reruns through this weekend).

Fill wasn’t too bad either, especially with some constraints due to theme and the left/right symmetry, though it is odd to uncover something as long as OPINION POLL and realize it has nothing at all to do with the theme.

The added sinking of that 2-hit-and-it’s-done PATROL BOAT that I can never find when I play was delightful.

Hope you’re not saying I HATE IT! with this one. I certainly didn’t. 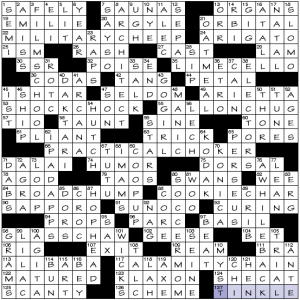 Phonetic substitution time again. Here, we have j- sounds replaced by ch- ones. Technically, that’s a voiced postalveolar affricate (ʤ) becoming a voiceless postalveolar affricate (ʧ) and it’s exactly the same as the Los Angeles Times theme of just over a week ago. As is often the case with these types of themes, the sounds are structural siblings.

I’d probably be more amenable to this theme had I not encountered its twin a mere eight days ago. On the other hand, it feels kind of SCANTY (125a [Meager]) for a full-blown 21×21 grid. Perhaps I’m too chaded, er, jaded. Do want to note, however, that neither of the relevant phonemes appear elsewhere in the grid, because Shenk is a consummate cruciverbalist even when plying lesser material.