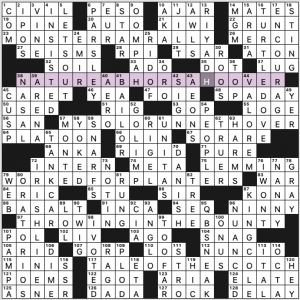 Took me awhile to figure out what was going on with the theme answers, but eventually things cohered. Six familiar phrases have a generic noun replaced by a brand name for such a thing:

I enjoyed the theme, had to work for it a bit.

I liked finding IRISH LINEN in the grid, but it felt like there was too much blah fill for me to enjoy the whole puzzle. OCTA, BAILOR, SEISMS, LOGE, SO RARE, VALOREM (!), AEONS, that sort of stuff.

It’s time for dinner now, so I’ll sign off with a 3.4-star assessment.

Perfect title in more ways than one.

THEME: Phrases that have senses in them are clued as if the sense is not there with the crossing entries, 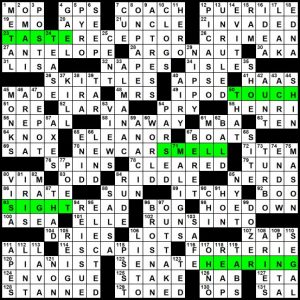 Yowza this one was tough. The cluing all around coupled with that curveball theme made the whole thing extremely difficult for me, clocking in at north of thirty minutes. To compare, my normal solve time is 10-15 minutes for a WaPo. Lots of elbow grease went into this one. But while definitely frustrating at times, I gotta say I rather loved it. It’s not often a WaPo goes for Fireball difficulty, which is what this one approaches imo.

When, out of the gate, you can’t get a foothold and you suspect something is amiss, the best thing to do is find several entries adjacent to one another that you’re absolutely certain of. For me, I found this foothold in the Southeast corner with ONO, RAP, TBS, ARES, PITA, and SEAL. Noting they all crossed.a longer answer I assumed they skipped over it, and knowing Evan’s style I began to drop in a fourth or fifth letter for each that would still make them legitimate crossword words.

That led to OH NO! REAPS, TABS, PINTA, and SEGAL, which in turn allowed me to see

SENATE HEARING quite easily and gave me the AHA I needed so I could be on the lookout for more trickery. Senses are being skipped!

But wow, it was still a tricky path to the solution. Especially in the north. So many stumbles I don’t know where to begin.

ASININE for PUERILE (a word I’ve only read and never heard! I don’t know how to pronounce it. Is it “Pure Isle”?), HOE for CUE (great clue!),  ODYSSEUS for ARGONAUT (how do they have the same number of letters?! I mean, I know the former was headed for Ithaka, but I thought perhaps he wanted to do some sight-seeing at Colchis along the way…) STALKED for STANNED (I’ve never heard of STANNED, but STALKED did seem way too creepy an answer for the clue), LOTTA for LOTSA, TAWNY for TONED, ASP for RAM, okay I’ll stop there. There’s lots more.

We’ve seen the “skip-over-a-letter” idea before, but usually the cluing is softened up to compensate for the trickiness of the theme. Not here! In addition to all the aforementioned stumbles were plenty of ambiguous clues that could have multiple answers such as [Object] for ITEM. I mean, “Object” can be a ton of different things, right?

Mind you, none of this is a complaint. I rather enjoyed it. After all, it is a puzzle, right? And puzzles by nature should challenge and baffle. And some are just plain difficult. Difficult ones, in the end, should still be satisfying and fair, and this one fits that bill. My only real nit with the puzzle is that I would prefer if all the senses didn’t actually refer to senses… such as SENATE HEARING. HEARING in that sense doesn’t really evoke the auditory definition, whereas TASTE RECEPTOR certainly points directly to the sense.

There may be an element to the theme or its execution that I am missing. I’m not entirely sure.

One more curious note is a lengthy apology from Evan for the clue for 111D. I personally did not realize that it was controversial. I mean, has anyone ever listened to the “Lucy” episode of NPR’s RadioLab? That’s nuts (and intensely sad). Anyway, you can read the apology for yourself at Evan’s WaPo blog.

I’m certain he’ll catch flak for this one, but I hope no one comments about Evan’s lack of ideas. The variety of ideas is what makes opening a WaPo puzzle so exciting every damn time.

Take the phrase DIRECTOR’S CUT, remove the apostrophe, and you have an apt description for what’s going on here. Famous directors’ names have been cut in two and are found in the circled letters at the starts and ends of the theme entries. The revealer at 115a is clued [Edited version of a film, and a theme hint]. (Not the best clue, since all versions of a film are edited, but its intent is understood.) 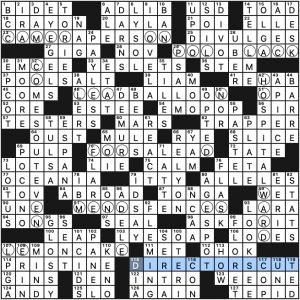 It’s nice that these directors are all either working today and directing some big-name films or that they directed some of the classics in cinematic history. It’s not so nice that there isn’t much diversity in the names. I’m sure Zhouqin would have looked, but maybe no good entries exist for Kathryn Bigelow (The Hurt Locker), Ava DuVernay (Selma), or Sofia Coppola (Lost in Translation). Otherwise, solid theme, expertly executed.

There’s so much theme material—going in both directions—that there’s little room for sparkly long fill. We do get “I LOVE L.A.“, LOOK-SEE, AGE SPOT, OCEANIA, and “YES, LET’S!” but nothing much longer. POOL SALT [Crystals added to a certain swimming place] is a new phrase to me having never been involved in pool management. I am familiar with chlorine, shock, and pH balancers, but I didn’t know people added salt to pool water.

Getting ready for the Boswords Wintersolve so this will be quick. The theme answers are phrases clued as if they referred to athletes. 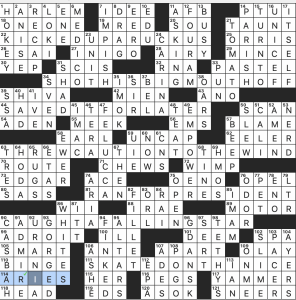 A solid theme that was reasonably pleasing.

What I didn’t know before I did this puzzle: that CALI is WSW of Bogota.

Here’s what 90a makes me think of.

THEME: The word NET advances in each of the common phrases. 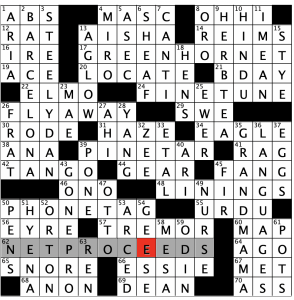 Well, not my favorite solve of the day. I don’t really see how NET is proceeding. In the grid, it looks like it’s receding to me, but I guess it’s a matter of perspective. I look at the grid north to south. I suppose this one is asking you to look at the revealer first and look south to north. Why not put the revealer north as the first themer? That might be cool- and certainly different.

I got hung up on a lot of fill too, and not in the way that I really enjoy. ARCED/ESSIE is an ugly cross imo, I think of HERBal TEA, not HERB TEA. CAN’T I, A SEC and a few more. I MEAN, I liked GRANDMAMA (I didn’t know she was MAMA… I thought just GRANDMA. According to the atrocious Addam’s Family: The Musical, it’s just GRANDMA).

But a puzzle all the same. Rarely a bad thing. And it wasn’t in this case.

Looking forward to getting back to our regularly scheduled Universals tomorrow!