This is Soleil’s NYT debut. She’s a senior at The Lawrenceville School in New Jersey and a welcome addition to constructing! Her puzzle kicks off a week of puzzles by Black constructors. Everdeen Mason, the new (as of a month ago) editorial director of of the New York Times Games team, wrote about this project. On the one hand, I find it infuriating that we have to make a Thing about Black constructors. On the other hand, yay! for more diversity in Crossworld. It matters until it doesn’t, and it still matters.

This is a terrific Monday puzzle. The theme is smooth and consistent, the fill is solid, and it’s perfectly pitched for early-week solvers.

All the theme answers are 15-letter entries. I didn’t know what was going on until I got to the revealer. 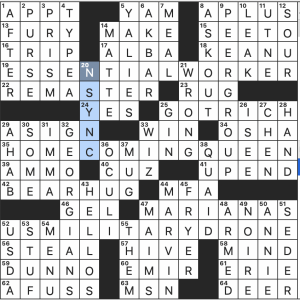 What I didn’t know before I did this puzzle: that NSYNC recorded a song called “Bye Bye Bye.” 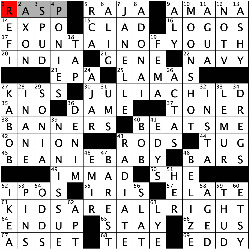 Let’s go to the revealer at 61A to find out what’s going on, although IMO this puzzle didn’t need one. [With “The,” 2010 Annette Bening/Julianne Moore film … and a hint to the ends of 17-, 30- and 45-Across] gets you KIDS ARE ALL RIGHT. (The title of the film is The Kids Are All Right, as the clunky “With ‘The,'” indicates.) What that means is that a word that means a young human of some kind — a KID — is on the RIGHT in each theme answer.

As mentioned above, I think this puzzle could have done without a revealer. I’d instead have put in one more theme entry. “The Kids Are All Right” would be a fine title for the hypothetical no-revealer version of this puzzle, but even though LAT puzzles don’t have titles, I think a solver could figure out what was going on with no troubles if the last answer were a phrase that ended in TOT or MINOR or something like that. I wouldn’t mind this revealer if a) the movie were either more recent or more evergreen and b) it didn’t need the dreaded “With ‘The,'” in the clue.

The fill, like the kids, is all right. After the fact I was amused to go back and look at the clue for 12D, NO TV — I thought “Imp’s punishment” seemed oddly phrased, but now it’s clear that the constructor was avoiding repeating a word that was in a theme entry or the revealer. 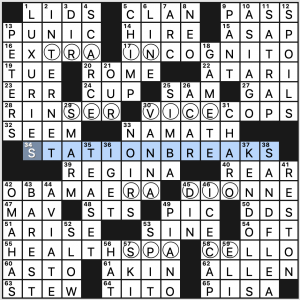 Got it? That works, yeah? Sadly, no wordplay in this kind of theme, but the choices for theme entries are mostly good. RINSER isn’t great, but INCOGNITO, HEALTH SPA, VICE COPS, and OBAMA ERA all get a thumbs up from me.

But, heck, this sure didn’t seem like a Monday puzzle with those big corners and fill like PUNIC and SATRAP and opaque clues like [Toppers] and [Early astronaut Ham, for one]. Plus, some names were fine for us olds (PETERS, NAMATH, CHARO), but the younger set might’ve struggled with them. Maybe it was the weird grid design (sort of an S-shape) that messed with my rhythm. I don’t know. I’m surprised I got in under 5 minutes (just), only because the lower half flowed much more smoothly.

This felt like a tale of two puzzles. The top half felt crunchy and disjointed, the bottom half flowed with nicer fill and more straightforward clues. At least, that was my experience. Maybe yours was the opposite? 3.3 stars from me. 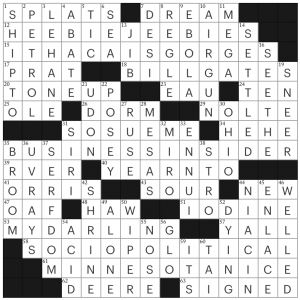 Hey it’s Monday! Congratulations to everyone who competed in/constructed for/organized and ran the Boswords Winter Wondersolve yesterday. Although I really miss seeing crossword people IRL, these online tournaments are as close as we’re getting for now, and it’s just so nice to “see” all of your nerds digitally. Let’s do it again in a few weeks, yeah?

Today’s challenging puzzle from Kameron Austin Collins wasn’t so very challenging, but I enjoyed it quite a bit! I especially loved the long entries in the N and S: HEEBIE JEEBIES / ITHACA IS GORGES / SOCIOPOLITICAL / MINNESOTA NICE are all excellent, and as an upstate New Yorker, the ITHACA clue was a gimme. Do people outside of this region also know this slogan??  I’m not crazy about the central spanner BUSINESS INSIDER, which is a little humdrum, but it holds those other four in place, so I’m not mad about it. I also think this grid design is pretty sharp— I’m a fan of staircase blocks in unexpected places, like the corners we see here, and the pattern through the middle is pretty unique.

Ok, well, that’s all from me. Overall, tons of stars for clean fill and satisfying cluing. See you on Wednesday, and good luck with all that snow, East Coasters. 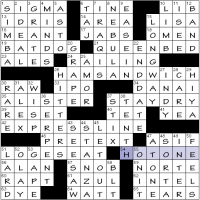 I’m not too thrilled about the theme itself, but do appreciate the craftsmanship, which is basically ensuring evenness. For the hot constructions there are two one-word conglomerates and two two-word phrases; and for what it’s worth they’re arranged alternately. On the other hand, if they were arranged symmetrically I would have praised that, and if they were arranged sequentially, I would have thought that was ok too. So I guess it’s a scam. Damn, now I feel cheated by this crossword!

Disclaimer: I wrote the above before realizing that 19-across was also a theme answer, but I now refuse to redact or rewrite the passage.

The cluing is pitched properly for an early-week offering. Oh and by the way, I’m not going to include a Weather Report tune, because I just don’t care for 98% of fusion jazz.

There isn’t much, which again speaks to its anodynousness.