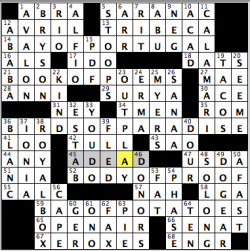 Good day, everyone! If you’re somewhere in the northeastern part of the United States and, like me, are snowed in, here is hoping you’re staying warm and staying safe. (Obviously, wishing those of you not affected by the storm all the best as well!)

It’s time to bop to the beat of Liz’s drum in this puzzle, as the five theme entries in her grid are all three-word entries in which the first letters of the words have a B-O-P pattern. (Specifically, it’s a B-of-P pattern.).

The layout of the grid allowed for a lot of medium-to-long non-themed fill to shine through, including OPEN AIR…though I am wishing all the best for those establishments doing open-air dining in the Northeast and hope they bounce back quickly after this massive snowstorm (65A: [Type of restaurant seating that became prevalent during COVID-19]). Speaking of restaurants/food, there’s definitely a lot of chew on with TACOS (19D: [Cantina food orders]) and CALAMARI (11D: [Mediterranean appetizer]), and, if one dabbles in alcohol, can wash them down with a SARANAC beer (5A: [New York resort lake]). Crossings definitely were needed to bail me out where ALFIO (3D: [Cavaliera Rusticana” baritone]) and NEY were (31A: [Napoleonic marshal Michel]). My favorite fill of the day is ROYAL BOX, making me think of the number of times I’ve woken up early for Breakfast at Wimbledon and watching the tennis tournament on television (38D: [Kate and Meghan sat in it at Wimbledon]).

“Sports will make you smarter” moment of the day: SURYA (29A: [French skating champ Bonaly]) – It was/is striking to see a Black woman on the ice as part of a figure skating competition, but even more captivating if you ever got to see, almost inarguably, the most athletic figure skater ever in competition, France’s Surya Bonaly. (My dad always made sure to record her performances every time she came on, even though he was far from a figure skating fan.) Bonaly was the premier figure skater in Europe to start the 1990s, winning the European championships in five straight years (1991-1995) and earning the silver medal at the World Championships in three staight years (1993-1995). Though she never medaled in the Olympic games (finished in fifth place in 1992, fourth in 1994), her routines always were, by far, the most difficult, as she would routinely attempt — and land successfully — jumps and combinations that had never been attempted in competitions by women before her, including landing a backflip on one leg during the 1998 Olympics. Racism and gender expectations were clearly an undercurrent in a number of the events she competed in and her results in them, and, most famously, protested her second-place finish at the 1994 World Championships by refusing to stand on the podium. (Many reports from that world championships were that the first place finisher, Yuka Sato of Japan, earned more points for artistry while Bonaly earned more points for her actual jumps and moves.) Here’s Bonaly doing some of these backflips, and you should look up some of her whole routines to see how great of a all-around skater she was in her heyday. 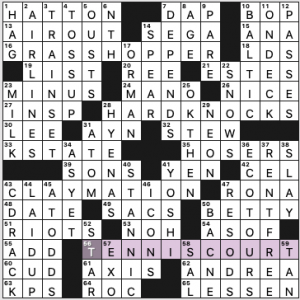 Sports will make you smarter, or at least will make you figure out a sports theme faster. Except that it’s a Tuesday puzzle that you can finish without understanding the theme … but anyway: TENNIS COURT is the revealer, 56a. [Playing area usually having one of the surfaces seen at the starts of 16-, 28- and 43-Across], and we have grass courts, hard courts, and (Rafael Nadal’s favorite) clay courts:

I didn’t see the theme at all while solving, and I should have because I know Ade’s gonna work a sports angle when he can! See also: billiards legend Jeanette LEE (what? I know poker is a sport because it’s on ESPN), K-STATE clued via its team name (my brilliant niece goes to K-State!), OUSTS with a soccer ref clue, baseballese ON DECK, and NEON Deion Sanders.

3.6 stars from me. The rating’s dampened a bit by fill like HATTON, ESTES, INSP, and KPS, but I did appreciate the stealth sports theme hiding in a few nouns.

Our theme is critters with jobs as military mascots. The revealer is SERVICE ANIMAL (55a, [Nonhuman helper, and a description of this puzzle’s mascots?]), and the theme answers are well-known kinds of  animals but whose description could also allude to the military service for which that animal might be a mascot. 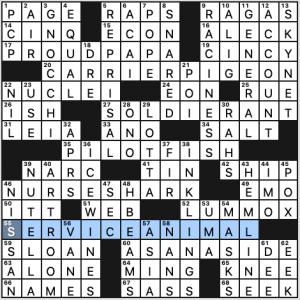 A cute theme with multiple layers to it. Very well done. Kudos to Jeff’s partner on this debut.

Gridwise, it’s tough working with 13-letter first and last themers with a 9-letter central themer on top of that, but I must say, it’s handled beautifully. RACINESS is on the tame side (ironically), but I love PROUD PAPA, AS AN ASIDE, GNOCCHI, ICE WINES (too sweet for my taste), SKYNET, NUTELLA, ART ROOM, and INKLINGS. LUMMOX is great, too, but H-BEAMS…meh. On the whole, really great fill.

Very nice puzzle all around with a fun theme, great fill, and smooth cluing. Four stars from me.

Erik Agard’s (him again?!) Universal crossword, “That’s So Yesterday … or Is It?” — pannonica’s write-up 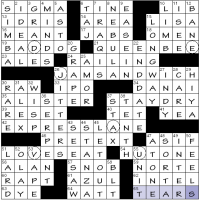 As I was solving this one, I said to myself, this FEELS (50d) familiar. What started out as a mere inkling soon got my panney-senses tingling, whereupon I checked to see who the constructor was—”uh-huh.” And then I looked at the title and I thought, “gee.”

So what we have today is a puzzle that is almost, but not exactly, like yesterday’s Universal offering. Difference is, that one had a clear theme (“words that can be preceded by ‘HOT'”), whereas this one doesn’t seem to, aside from looking remarkably similar to its predecessor.

The ballast fill, where possible, is clued distinctly from yesterday’s. So, for instance, 24a [Hand support in a staircase] is replaced by [Complaining bitterly], and both lead to RAILING. 41a [Opposite of “nay”] is YEA, then [About __ big]. And 49d [Prefix for “galactic”] INTER– is reclued as [Bury in the earth] —wait, no, it’s just the prefix thing again: [Lead-in to “leave” or “weave”]—what gives?

Back to the ‘theme’. What we need to do is compare yesterday’s theme entries to today’s analogues. Each has a one-letter discrepancy. Just as in the recursive movie Groundhog Day, things are changed ever-so slightly, eventually resulting in a notable … improvement?

Agard has played a clever and fun trick on us, and it retroactively explains some of the weaker answers, like LOGE SEAT and BAT DOG in Monday’s grid. Today’s JAM SANDWICH is not prizeworthy, but it’s all in service to the greater scheme. What’s great is that yesterday’s puzzle was smooth enough to conceal its ulterior purpose until today’s shoedrop.

The crossing entries are obviously affected, so the downs change thusly:

My only real question is, would it have been better to have run the pair today and tomorrow, or would everyone have been all groundhogged out by then? 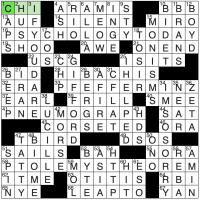 Pipe down over there! Can’t you see I’m solving a puzzle? Our theme has to do with silent letters, and they all happen to be P’s:

I didn’t know 33A at all, but that says more about what I do and don’t drink than what I know. And I tried PNEUMOMETER at 41A, but I also don’t know anything about that machine either! I suppose you can make the arguement the Matt only chose P’s because they mean “quiet” in musical notation. Or maybe P just had the coolest words! This one is full of Matt Jones wit, and that is always entertaining. 4.3 stars today. 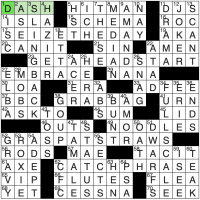 We have a team effort with today’s LAT puzzle! What heights has this puzzle “attained?”

My attempt at a joke above isn’t really all that funny. We have the words seize, get, grab and grasp, which all can mean catch in some way. This took me a minute to figure out, but I am still exhausted from the Boswords Winter Wondersolve, where I actually finished 28th! That is the best I have ever done at a crossword tournament, so whenever they go live again I may do well! But for now, a nice Tuesday puzzle to relax with. 4.2 stars from me.