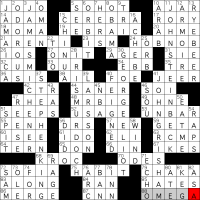 hello and welcome to episode #661 of matt gaffney’s weekly crossword contest, “Palimpsest”. thanks to matt for filling in for me last week when i forgot to blog the puzzle due to the altered deadline. for this week 5 puzzle, the instructions tell us that the answer is seven letters long. okay. what’s the theme? in this oversized (17×17) puzzle, the theme answers are all down entries cluing a famous author via one of their works:

to accommodate this set of theme answers, matt has opted for mirror grid symmetry (which is, i think, why the theme answers read down instead of across; left/right mirror symmetry is more pleasing to the eye than top/bottom, because gravity).

so, what’s going on with the theme? these are definitely not all of these authors’ most famous works. middlemarch is, and east of eden is certainly among steinbeck’s most famous works (though still probably second to the grapes of wrath), but the others are very much not. i’m particularly looking at dark screams, which is a collection of horror/gothic stories that doesn’t even have its own wikipedia page, to which king contributed one story. that’s a strikingly obscure choice, given that king has so many super-famous works of his own. so i think something must be going on with either these particular works or perhaps just their titles.

i also don’t know what to do with the parenthetical numbers, which are definitely not enumerations or an ordering. perhaps they’re indices, although into what, i cannot really fathom yet. i don’t think they are pointing at specific squares or answers in this grid by number. they do go up to 26, which makes me think of letters of the alphabet. and even letters of the alphabet combined with authors and books makes me think of the sue grafton series of alphabet mysteries. but that one didn’t even make it to Z before grafton’s death.

what about the title? a palimpsest is a manuscript whose text has been scraped off so that it can be reused for another document. that’s certainly a suggestive title for this crossword. my first thought was that perhaps these works were revisions of earlier works, but reading up on some of these less familiar ones, i haven’t found anything like that to be the case. another thought is that perhaps this grid is the same pattern as a previous puzzle (as if the crossword itself is a palimpsest) and that perhaps the book titles are related somehow. i have this niggling feeling in the back of my mind that i’ve seen a contest crossword called “palimpsest” before (i think by will nediger?) and that the mechanism involved two grids using the same pattern, but a search isn’t turning anything up. in any event, if such a puzzle did exist, i feel reasonably confident that matt would’ve seen it and not reused the same idea.

perhaps there is some wordplay connection between the author and book names. i notice that both MIDDLEMARCH and GEORGE ELIOT are 11 letters; the same is true of STEPHEN KING / DARK SCREAMS and JOHN GRISHAM / ROGUE LAWYER. this breaks down at IRIS MURDOCH (11) and HENRY AND CATO (12), though, and the others are even worse. no, i think this is probably not it.

what if we interpret the book titles as crossword clues themselves? “middlemarch” could be a slighty stretchy punny clue for the common crossword answer IDES. “chesapeake” could certainly clue BAY. “east of eden” refers to the land of NOD in the book of genesis. some of these others are a little more dubious, though. what would “dark screams” be? what about “henry and cato” other than just… NAMES? even “rogue lawyer” isn’t quite a crossword clue for any answer i can think of, although perhaps SHYSTER comes closest. i’m not really sure about “a man of the people” either.

i wonder if the parenthetical numbers are instructing us to go back and look at previous MGWCCs. that would be wild. i don’t think matt would have a january puzzle that required a subscription to the previous years’ puzzles to solve, though. that would be kind of mean to new subscribers. callbacks to puzzles from earlier in the same month, though, are a thing matt has done before.

well, i’m stumped, and now i’m out of time. i’m going to try submitting RECYCLE as a hail mary; it’s seven letters and related to the idea of a palimpsest. that’s all i’ve got. let me know in the comments section what’s actually going on.