Alternate title: “You CAN Make This Stuff Up.” Each theme entry is a fictional chemical element used in various sci-fi or superhero films. The revealer is MOVIE ELEMENTS (37a, [Plot, character, lighting, e.g., and a hint to the starred answers]).

Oh, hey! Looks like this is a double debut for both constructors. Congrats, gentlemen! 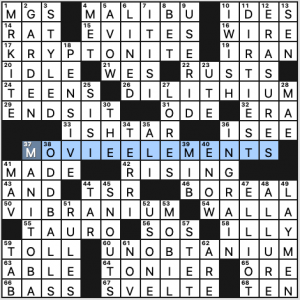 I smiled when I grokked the theme since it played to my inner geek. I think I may have even considered developing a similar theme at one point, but I never followed through. I’m glad these guys did and that the WSJ published it, even though I bet some solvers will not enjoy it.

The only thing that bothered me a little was the revealer. MOVIE ELEMENTS isn’t an in-the-language phrase for one thing, and for another, three of these four items began life elsewhere, either in comic books or television. FICTIONAL ELEMENTS might work better, but alas, it’s 17-letters long.

If you’re wondering if there are other fictional elements, yeah there are. Of note: Mithril, the dwarf-mined metal in Lord of the Rings, Feminum, the Paradise Island metal of which Wonder Woman’s bracelets are made, and kyber crystals, a semi-sentient material used in the formation of lightsabers in the Star Wars universe.

Back to the grid. MANITOBA and ODDBALLS top the non-theme fill. The other stack of DIRTIEST and ERASURES is fine, just not so sparkly. MR KITE is a deeper cut from the Beatles (the song is “Being for the Benefit of MR. KITE” off of “Sgt. Pepper”). Normally TSR [Original D&D company] is derided as stale crosswordese, but given the geeky nature of the theme, it fits in fine.

In the eyebrow-raising department, TAURO is clued [Bullish beginning?]. I take it that means it’s a prefix for some word, but nothing springs to mind. ILLY [In a bad way] is itself in a bad way, and ENOW [Sufficient, poetically] looks like it could be the answer to the question, “When should I respond to these EVITES?”

I enjoyed the geeky nature of the theme, though I’m sure it’s not to everyone’s liking. 3.5 stars from me. 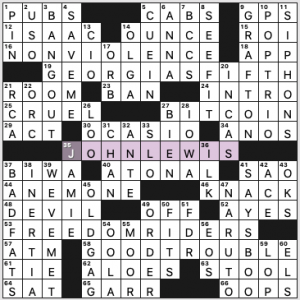 It’s not the first JOHN LEWIS tribute puzzle I’ve seen (we ran one by David Steinberg last year in Crosswords With Friends), but I am always glad to have the gentleman brought to mind. Here’s Yacob’s theme: 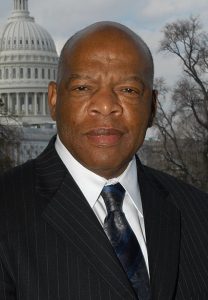 Trickiest crossing: 37a. [Japan’s largest lake, located NE of Kyoto], BIWA, and 37d. [Butter and margarine, nutritionally speaking], BAD FATS. I feel like BAD FATS isn’t the term of art here, and I didn’t know BIWA. I was gambling on that B.

Five stars for the theme, 3.75 for the surrounding material. 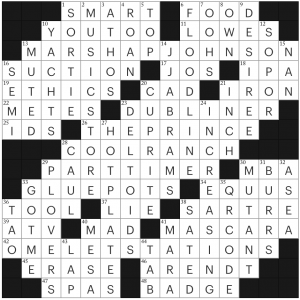 As is often the case, I found myself entirely on Natan’s wavelength here. The proper nouns were all people/places/things I know and love, and the culture reflected by this puzzle is (mostly) my own (although I definitely never attended bar mitzvahs on YACHTS!). And I think for me this puzzle illustrates an idea we talk about a lot — that it feels *so good* to see yourself and your life reflected in the puzzle. For people who are used to seeing their life reflected in the puzzle (with baseball players and golf vernacular, maybe?), any departure from that can be jarring, or can feel “unfair” in some way. But don’t you want everyone to experience this feeling? Of saying “YES I do know all about COOL RANCH Doritos and MASCARA and Mystique the MUTANT and MARSHA P. JOHNSON and Hannah ARENDT and Carol and découpage and I love all of those things!”? I’m not saying every puzzle needs to be like this one (in fact, if they were, it would mean that a lot of people would never get to experience that feeling because this is just one worldview!), but I *am* saying that diversity in constructors and diversity in puzzles are good and we should celebrate both.

Anyways, the puzzle: long entries are MARSHA P. JOHNSON / OMELET STATIONS / MUSIC STORE / INCREASING – while MARSHA P. JOHNSON is the clear stand-out entry here, the clue on OMELET STATIONS [Folding tables at a breakfast buffet?] is silly and fun. Other highlight entries include J.J. ABRAMS, QR CODE (both of which have those tricky starts where the solver is like, that can’t be right, and then the solver is wrong and it is right!), EQUUS (same deal except in the middle), THE PRINCE, and GLUE POTS. Solid stuff!

Overall, buckets of stars from me. See you Friday (!!) 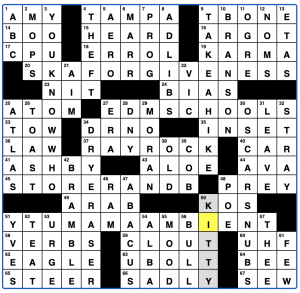 Francis Heaney’s “Front-to-Back Music” is this week’s AVCX, and both its grid and its theme are chock full of tunes.  Let’s start with the theme:

That last theme entry is just ::chef’s kiss::.  Each of these entries is a more well-known person/phrase/entry with one of its first letters moved to the back: ASK FORGIVENESS, MED SCHOOLS, RAY KROC, STORE BRAND, and Y TU MAMA TAMBIEN

Here’s what 41A, “Jazz harpist Dorothy” ASHBY sounds like.

Other music-filled parts of the grid: the T(rom)BONE, Guitarist Johnny MARR, PROG rock and its “epic organ solos”.  I also liked Francis’s notes that ERROL Flynn could have made his name a palindrome if he married Peter Lorre, and that he roots for PREY on nature shows.

Standing in for pannonica today because it made more sense for her to review yesterday’s delightfully clever Universal puzzle (as she reviewed Monday’s). If you missed those, then you should be experiencing FOMO. Go back and try ’em out. 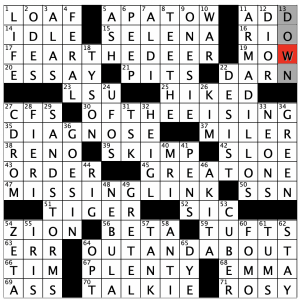 Love FOMO as a phrase/acronym. It’s fun to say and it’s a very real condition, yet easy to laugh about.

This puzzle was very smooth and I filled steadily from top to bottom. I did not know the slogan FEAR THE DEER. I like the singsong rhyminess of it, but deer don’t strike me as an animal to be scared of. They’re more the type that I swear at after they run into my car.

And [Up (for)] is a fantastic clue for DOWN.

NEBULA? Again? Isn’t that three days in a row? Ha!

Hope y’all got dug out of the snow! 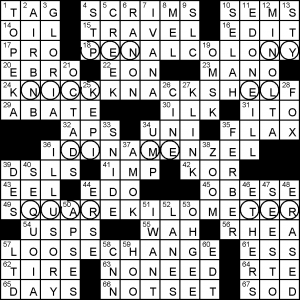 I’m not sure I fully get why the LOOSE in LOOSECHANGE, the revealer, means split into two parts. In any case, the first four US coins, which have punchy nicknames, are presented in that way, in order.

The arrangement of 11/15/13/15/11 plus the difficult letters of KNICKKNACKSHELF, IDINAMENZEL and SQUAREKILOMETER [sic] add a lot of challenge to constructing the puzzle’s fill evenly. Obvious filler includes many weird plurals like SEMS, APS, DSLS.

Lighter touches included AIRBNB and the casual clue for DAYS. Also, the [New way for many to meet] was ZOOM and not something like GRINDR.