Seems like there have been a lot of debuts lately and here’s another one. Congrats!

This theme is all about CROSS REFERENCES (38a, [Encyclopedia features, and four clue pairs in this puzzle]), those things which kill speed solvers’ times. (I’m no speed solver, but this definitely took longer than usual.) The theme answers are four pairs of words that are well-known phrases regardless of which word comes first. 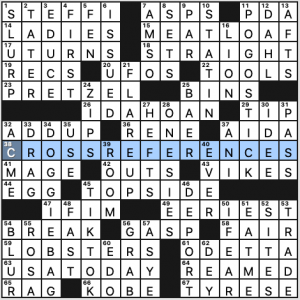 The more I look at this theme, the more I’m impressed. Not only did our constructor have to find phrases that could go either way, but they had to have at least one common letter, and then everything had to fit into the corners of the grid. With those constraints, it’s not surprising that everything is not symmetrical, and that’s perfectly okay later in the week when we’re hoping for a good, crunchy theme.

So as troublesome as this puzzle probably was to construct, we can look past some of the gluey bits of crosswordese that hold the grid together. Stuff like: EDUCE, AFTS [Early p.m. times], IDEE, IF I’M, AS YE, and EDO. Besides, there’s still a raft of fun fill in MEATLOAF, LOBSTERS, USA TODAY, POGO STICK, DOGGIE BAG, FLARE UP, ONESIES, and PRETZEL.

Despite some dodgy short fill in places, I enjoyed this theme and the longer fun fill. 3.9 stars. 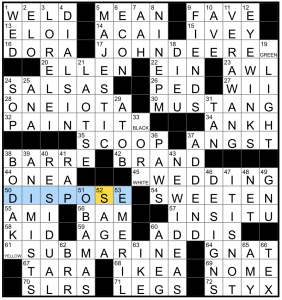 This Thursday’s NYT isn’t as tricky as it can sometimes be, but there’s a nice bit of synaesthesia happening in some of the grid’s squares:

Each rebus square in the grid contains a color present in title of both the song in the across entry AND the down entry.  There’s a great selection of tunes across eras happening, with everything from PAINT IT BLACK and YELLOW SUBMARINE to more modern selections like Lorde’s GREEN LIGHT and Cardi B’s BODAK YELLOW.

as long as we’re on a songs with colors theme…

THEME: Common phrases are reimagined as if they are a piece of jewelry 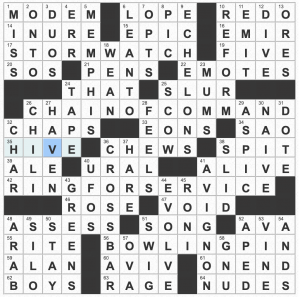 Very clever idea and a solid set. The first three themers all seem to relate to the professions  in their clues before they are modified to refer to jewelry. The last one is a curveball. I suppose it’d be impossible to relate it to an actual bowler that you’d find in your local bowling alley though since it’d be too difficult to clue without duping the clue/answer set. I don’t know a helluva lot about cricket, but I do know that the bowler is the equivalent to baseball’s pitcher… at least I think that’s accurate. Am I correct? Once every few years I go down a very short rabbit hole of figuring out how cricket works, then I get distracted by a butterfly.

Would’ve liked to see some more colorful fill, but I was taken with the theme, so that kept it entertaining. Very cute clue for HIVE [Home with your honey?]. 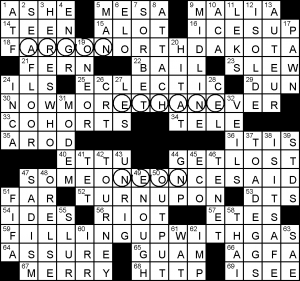 The puzzle is sixteen letters across to fit the revealing FILLINGUPWITHGAS, clued strangely as a [Pre-road trip detail…] In any case, three gases are hidden in long answers. ARGON and NEON are noble gas elements; ETHANE is an organic compound. I’m ok with a mix of gases, but with only three two shouldn’t be conspicuously more similar to each other than the third. FARGONORTHDAKOTA and NOWMORETHANEVER (a current ad buzzphrase) are great but SOMEONEONCESAID seems dry and somewhat arbitrary as entries go.

Not a lot to say otherwise; there is quite a lot of longer fill, but nothing really grabbed me. TOADEGGS is kind of weirdly specific. A reminder: all toads are frogs, but not all frogs are toads.

Also the [Medical suffix], ITIS. I would’ve appreciated a bit of Olaf clueing here to make it less dull – something informative like […, implying inflammation].

Jordan Hildebrandt’s Fireball Crossword, “See You on the Other Side” – Jim P’s review

Jim P here sitting in for Jenni who’s computered out this week.

Whew! That was a workout! Was it a slog? Maybe. At points. But it’s an impressive build, and for the 500th Fireball crossword, it’s worthy of that milestone.

The first things you might notice about the grid is the left/right symmetry, the large capital I in the upper center, and the rough heart-shape surrounding that I. None of that has anything to do with the theme, though.

The next thing you’ll notice as you start the solve is that some squares that should have numbers don’t, starting right off the bat in the upper left corner. Pretty weird to see a puzzle where the clues start at 5-Across. (Oh, this is in the printed out version, of course. The .puz version has all the numbers, but the key ones have only a – for a clue.)

It took me a long time to figure out what was going on. I sorted out the NE corner first with FACE {BOOK} and {BOOK} THIEF all based on the crossings. But I didn’t know what to do with it. Large chunks of grid were still empty when I finally got to the revealer at 92a WORMHOLES [Portals found in this puzzle]. Aha! This was confirmation of what I was suspecting, especially given the title. But where do the WORMHOLES lead? Turns out, there are pairs of them, and they work just like you’d expect. You start filling in an entry on one side of the grid, and finish it on the other side. The key thing to note is that if you start an answer in the Across direction, you continue in the Across direction on the other side of the wormhole. Same with the Down answers.

The pairs are as follows (note: since I have the .puz file image in front of me, I’m going to use those numbers for simplicity’s sake. I will give rough descriptions of the wormhole locations if you’re comparing it to the printed version.): 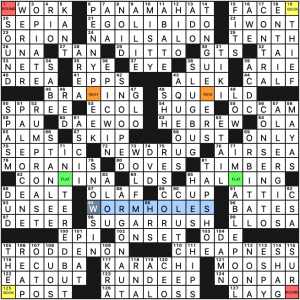 Oy, I just realized that each of the wormhole words are words that can precede “worm”: roundworm, bookworm, inchworm, and flatworm. That elevates the theme even more.

So yeah, I’m super impressed with this construction even though sorting it out (especially those central wormholes) was crazy bonkers, but it was a good fight and I’m glad to have come out the other side…as it were.

The other thing to contend with was the Stumperish cluing ([Canzone cousin] for ODE, anyone?). I suspect Peter made the decision to up the clue difficulty to mark the milestone. I felt like I was constantly second-guessing or re-writing answers I thought were right (e.g. I had GIRDERS for TIMBERS [Building beams]). While it threatened to turn some sections into an inscrutable slog (especially the West for me), I was able to make slow—if somewhat unsteady—progress until I reached the finish line.

That North section was blessedly trouble-free and comprises a great stack of PANAMA HAT, EGO LIBIDO (a new-to-me phrase) and NAIL SALON.  Elsewhere, there’s plenty of fill to like: EPIC WIN, SLUG BUG, Huey Lewis’s NEW DRUG, RUMP ROAST, SUGAR RUSH, WOLFMAN, ARGONAUT, KARACHI, and HECUBA. I did not know 119d ADL [“Fighting hate for good” org.], but now I know it’s the Anti-Defamation League. Nor did I know NONA Gaye of the Matrix films or NON-PAR banks.

I’m not going to go through the clues because there were so many crunchy ones. Feel free to comment on your favorite or most troublesome ones.

Bottom line, I really, really liked this puzzle—maybe even loved it. Solid construction all around, a nifty (geeky) theme, lovely fill, and tough but fair cluing. I’m going with the full 5 stars. How about you?

Very quickly because it’s been A Day (and thanks to Jim for covering the Fireball, which I have not yet wrestled to the ground).

I liked Brendan’s theme and wasn’t crazy about the fill. As the title suggests, the theme answers have QU where J should be. Wackiness results. 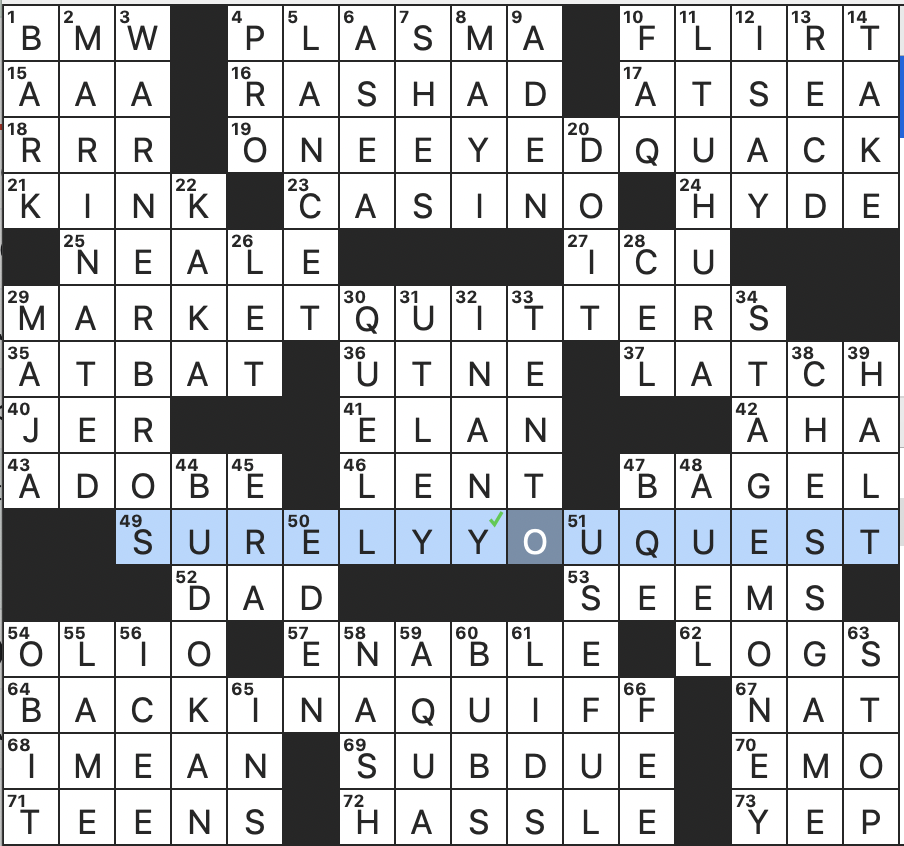 I won’t dwell on the theme except to say that BAGELs are not bread.

What I didn’t know before I did this puzzle: as usual, pretty much all Brendan’s musical references are new to me. In addition, I’d never heard of a QUIFF before. This was the best picture I found. 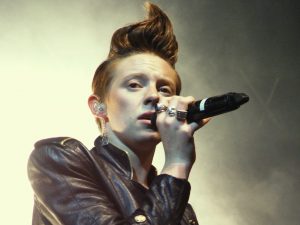