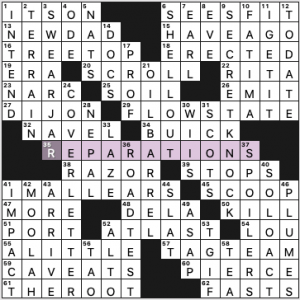 Are you like me, kids? Do your eyes light up when you see Erik’s byline, especially on a themeless puzzle? We’re in luck!

Erik strives to make his puzzles inclusive and representative, and he succeeds wildly. RAZOR gets clued as [Product from Bevel or Oui the People], which are companies serving the skin care needs of diverse populations. The Reconstruction ERA was, horrifyingly, counteracted with things like the Wilmington massacre targeting Black elected officials and a newspaper owner. Poet RITA Dove is Black. REPARATIONS are long-needed. DE LA Soul is old-school hip (cute video, below, from 1989). Mary LOU Williams was a jazz pianist; you can listen to her Greatest Hits here (I am 23 minutes into it and I’m digging it). There’s the [Online magazine co-founded by Henry Louis Gates Jr.], THE ROOT—I love The Root! They’ve got some brilliant writers. For example, here’s a new piece from Michael Harriot (who’s also a great storyteller on Twitter) about Charlie Case, the Black man who (SPOILERS alert) pioneered stand-up comedy in the vaudeville era. James EARL Jones, The Talk host EVE, and SOLO ACT Beyoncé are here. Islam gets FATIMA and Ramadan FASTS. PROF gets a Spelman College clue, referencing the HBCU (historically Black college/university). Sherpas get a shout-out for NEPAL. PLUMES are a distinctive feature of Marcus Garvey’s helmet. Kenya exports lots of TEA, and the TAO Te Ching is Asian. I liked seeing every one of these people, places, and things in the puzzle.

Fill I liked, in addition to everything mentioned above: SHELL OUT money, COVER LETTER, “I’M ALL EARS,” and ROAD TEST. Good stuff. This is a 66-worder (tougher to fill than a 72-worder) and there is no iffy fill. Like, none at all. An impressive grid. 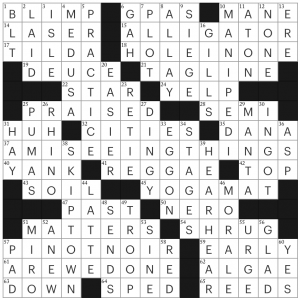 Part of what makes this puzzle feel so fun is that it’s just. so. smooth. Every bit of fill is splendid and fits perfectly into the ~mood~ of the grid. What does that even mean? I’m not sure, but it feels right! The long entries are fun, although I tried to get cute and throw in the spanner without any crosses, putting in I MUST BE DREAMING (also 15) instead of AM I SEEING THINGS  (the correct 15). [Note to other constructors, I will be using that seed immediately, plz don’t scoop me]. I also love SKIP TOWN, HEAR HEAR, ARE WE DONE, ALLIGATOR, HOLE-IN-ONE, and PINOT NOIR (which always makes me think of the Tituss Burgess song from Kimmy Schmidt).

Tons of stars from me, happy Friday, enjoy your weekend!

*I don’t actually mean that, I think, I’m just on a themeless high right now. All puzzle-types are good and valid and beautiful in their own way.

GRAIN ELEVATOR (19d. [Farmer’s storage facility, and a hint to the starred answers’ backward hidden words]) is the revealer, indicating that the circled words in the other theme answers are grains going in the Up direction. 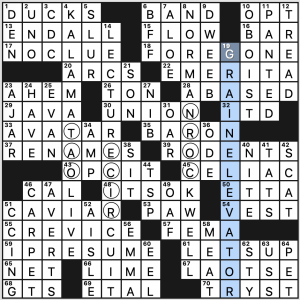 Nice.  All of the chosen theme answers are well-known and in-the-language, and the keywords span both words in each entry. Simple but effective.

There isn’t much in the long non-theme department aside from “I PRESUME” and FOREGONE. There is some crosswordese as usual (LAO TSE, ET AL, OP CIT). On the whole, the fill is pretty much straight over the plate.

Solid theme. Everything else is fairly standard fare. 3.5 stars.