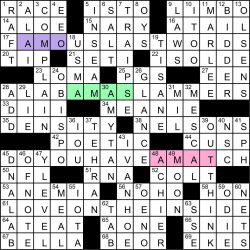 Good day, everybody! Here is hoping you are doing very well and, if you do make it a habit of doing something special for Valentine’s Day, that your (online) shopping in getting the perfect gift for your main squeeze is going great!

With romance in the air, it’s the perfect time to drop this grid, as the first three 15-letter theme entries feature circles inside where the letters spell out a trio of Latin lovers. The fourth entry, LOVE ON THE INSIDE, acts as the reveal (61A: [Sugarland’s #1 album of 2008…and an alternate puzzle title]).

Not a real hold up, but seeing the much less-common TISANE in describing the its clue made me stare at that for a bit (19D: [Herbal tea infusion]). Was sick like nobody’s business just over a week ago, and that probably would have been a welcomed sight then. Those in the Golden State would have been heartened by the crossings of LOMA (23A: [___ Linda, California]) and OBISPO (24D: [San Luis ___, California]). Liked seeing COMPLAIN more for the word in its clue that I love using in conversation (3D: [Grouse]). Remember hearing about the book referenced in the clue for RACE when it first came out and, given the author, I am sure it is an amazing read and, probably, a necessary one for those who are trying to and/or need to understand what it entails to live while Black and be better at talking about a number of dynamics surrounding it (1A: [“So You Want to Talk About ___” (Ijeoma Oluo bestseller]).

“Sports will make you smarter” moment of the day: MOON (49A: [Revolutionary figure in space?]) – Before we officially put the football season to bed for 2020, definitely have to talk a bit about Hall-of-Fame quarterback Warren Moon, especially in the backdrop of a Black quarterback, Kansas City’s Patrick Mahomes, playing in the Super Bowl on Sunday. Though Moon never made a Super Bowl, he did become a legend in two separate professional leagues. Moon, after going undrafted out of Washington, started his career in the Canadian Football League, and he won five Grey Cups (championship game/trophy of the CFL) in six seasons. After that, he was signed by the Houston Oilers of the NFL  in 1984, spending most of his time in the league with Houston. The quarterback at the helm of the Oilers’ “run-and-shoot” pass-heavy offense, Moon made nine Pro Bowls and was the NFL All-Pro at quarterback in 1990 after throwing for 4,689 yards and 33 touchdowns. Moon, after being enshrined in the Pro Football Hall of Fame in 2006 and the Canadian Football Hall of Fame in 2001, remains the only player enshrined in both. (Former Minnesota Vikings head coach Bud Grant, among others, are enshrined in both for contributions outside of playing.)

I’m going to start off-topic here because Evan’s title for this puzzle reminds me of his post office escapades.

You’ve probably done plenty of Evan’s puzzles, but you probably don’t know he has this whole other life of visiting and documenting America’s post offices. At current count, he’s been to more than 10,000 in all 50 states in the past 10 years. He’s been interviewed by NPR, featured on the BBC, and runs his own blog called Postlandia.

If you listen to those interviews, you get the sense that Evan truly appreciates post offices, but also that he wants to fight for them—for the preservation of their stories if not for their very survival. And he’s not worried about ruffling a few feathers to do so. Last year, he and some of his fellow post office enthusiasts discovered that in numerous post offices around the country, historical murals were being unceremoniously covered up with no explanation. Evan led the charge with a FOIA request to find out what was going on. The PR people he addressed his request to didn’t take too kindly to this and responded by denying his request but also inadvertently sending him some internal emails in which they referred to him as “extra cranky,” a phrase he considered adopting as his new moniker. I believe what happened next is that Evan turned to the Baltimore Sun, and they took the story from there.

(According to Evan, broadly speaking, the murals have been in place for decades and depict historical activities in each community—including slavery. Evan discovered that if a mural was the subject of a complaint, that mural was simply covered up with a tarp with no explanation. Supposedly, the USPS is conducting a review of its options, but has never once communicated its intent to the public; it is this lack of transparency that spurred Evan to seek an explanation. Things will no doubt be better once DeJoy is no longer Postmaster General, but that’s going to take a while.)

Returning to the puzzle and knowing this backstory, you can see why the title makes me think of the USPS reacting to Evan “Extra Kranky” Kalish coming to RAISE CAIN (35d, [Cause a commotion, and a hint to a feature of 3-, 6- and 9-Down]). In the other theme answers, you can find the letter string NIAC going in the Down direction (or CAIN going up). 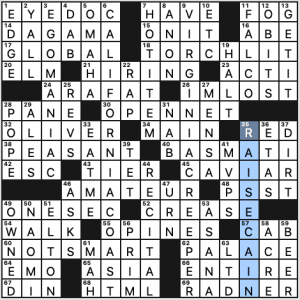 Nice finds, especially the two grid-spanners. I wouldn’t expect the letter string NIAC to produce many decent possibilities, but I like all of these. I also like that there are no circles telling us where to look.

That said, these entries don’t really RAISE CAIN in my view, unless you write them from the bottom up, which maybe some solvers did. They have CAIN going up, but there really isn’t any active “raising” going on.

Solid grid with a nice selection of theme answers. I do wish there was some grid trickiness in which CAIN is actually raised, but that would probably be a later-in-the-week theme. 3.5 stars. 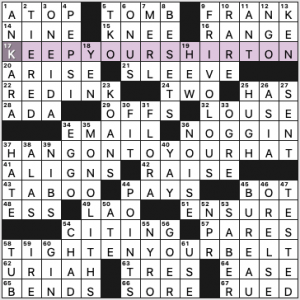 Simple theme, pitched right over the Tuesday-puzzle plate: phrases that tell you what to do with various items of apparel (with “take it off, take it all off” not appearing anywhere in the puzzle).

The theme is decent, though perhaps it didn’t entirely knock my socks off (in keeping with the “verb your item of clothing” vibe). Then again, when does a Monday or Tuesday theme really astound anyone? Its job is to not be too hard, and to be consistent. Mission accomplished!

I’ve been told that the NYT crossword editors try to limit the number of topical/trendy clues so that the puzzles can be reprinted years later in books and page-a-day calendars. And so it is that MONOLITHS is clued with [Uprights at Stonehenge, e.g.] rather than referencing those weird metallic monoliths that popped up in weird places like Utah. Aaaand … did that story have an ending? Did some company or artist fess up that they were behind those monoliths? Or did the story just vanish amid the mayhem of an attempted coup and the media dropped the monoliths like a hot potato. Mmm, potatoes. A giant potato in the desert wouldn’t be half bad. But I digress.

Solid fill. Four stars from me.

I love it when puzzles are so perfectly titled.

THEME: Phrases that have directions in them are represented by a word’s position in the grid. 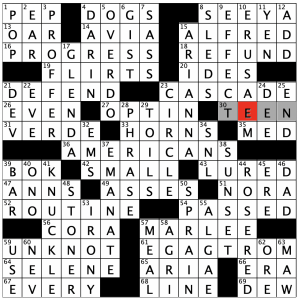 Did I miss any? That’s a lot of themers! I had a blast with this puzzle. Mostly to my inability to sniff out the theme until after I accepted I would get back to the hot mess I’d created in the northeast (unsure of what ERUSAEM meant, and relatively sure I was supposed to enter ERASURE for some reason).

I had some excellent stumbles along the way which only added to the mystique of the puzzle. Those included PROPOSE for PROFFER, VALEN(s) (as in Ritchie) for DARIN, BUSY for EVEN [All tied up], DIE for DEE [Don’t start?] (The start of the word “Don’t” is the letter D), and IONS for DOGS [They’re in charge].

That last one is where I finally grokked the theme, but it took way longer than usual to get that foothold. Excellent AHA moment. Enjoyed this one all around.

Two nits in the cluing:

French HORNS clued as “big”? Relative to what? I usually see them alongside baritones and tubas, and they typically look quite snug- cradled even- when they’re played.

UNKNOT seems fine when talking about shoelaces, but feels odd to me clued in a massage context. 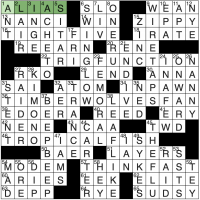 We have another Matt Jones puzzle where I imagine the brainstorming idea to be the most fun part. We have several phrases that, as the title hints at, have the initials T and F:

57-Across is a great entry to end this set, as it ties into the whole crossword mindset quite well. Even if you are not speed-solving, you still have to follow this advice unless you want to stare at the grid for days! This may be a frustrating process for any new solvers out there, but once you get the bug, your solving skills should evolve to the point where you ARE thinking quickly. Hopefully, whether you’re solving quickly or not, the puzzles are enjoyable. This one certainly was! 4.4 stars from me. 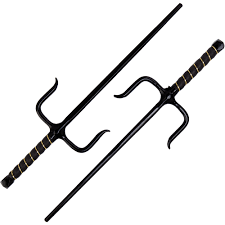 A pair of sai weapons 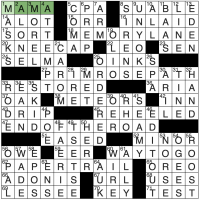 Another new byline this week, at least to me. We have quite an intriguing theme this Tuesday, with a revealer tucked in the SE corner:

So we have a bunch of “ways to go” that are all metaphors instead of real roads or paths. Nicely done! I thought this was quite clever. I don’t think I know of Michael’s work, but if they are all this clever they can keep on coming! 4.7 stars for a finely executed puzzle.