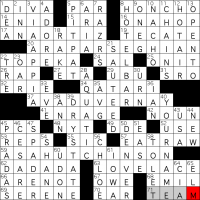 hello and welcome to episode #662 of matt gaffney’s weekly crossword contest, “Name Redacted”. i normally attempt week 1 puzzles without the instructions, but this month’s week 1 puzzle came two days early, with the following message from matt: This week’s contest answer is the three-letter first name of Kristin’s and my daughter, who was born at 6:53 this morning in Harrisonburg, Virginia. wow, congrats to matt and kristin! and how fitting that matt had a puzzle lined up to mark the special occasion. what are the theme answers?

so the first four of those theme answers are all people with a three-letter palindromic first name of the form A_A. no strangers to a crossword grid, any of them! (although their last or full names rarely appear.) what about the fifth one? no first name is given, but LOVELACE’s first name was ADA (and there’s a programming language called ada named in her honor), and that must be the answer to the meta. welcome, ada!

that’s all i’ve got this week. congrats again to kristin and matt (and big brother tilghman, himself the subject of a mgwcc to herald his arrival back in october 2017)!