Valentine’s Day is fast approaching, and this grid may be the start of a thematically-apt run of puzzles from the WSJ. The revealer is LOVE IS ALL AROUND (39a, [1968 hit for the Troggs, and a hint to what can precede this puzzle’s perimeter words]). Each of the twelve words on the puzzles edges can follow “love” to form a two-word phrase or compound word.

Those phrases are (proceeding clockwise from the NW): 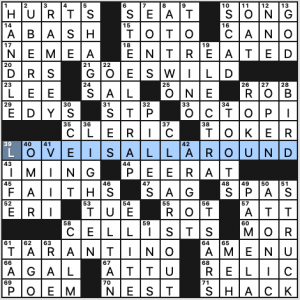 The revealer song title didn’t ring a bell, (though it did bring to mind 1978’s  “Love Is In the Air” by John Paul Young), but upon hearing it (below), I recognized it—though it’s been ages. Quintessentially 1960s, I’d say. The theme works (mostly).

I’ve heard that building a grid where your themers are all on the edge is tough to do. Add to that a grid-spanning central revealer, and you have a lot of constraints to contend with. The difficulties definitely show up here with a SCAD of sub-par fill. That SE corner seems particularly thorny with ATONIC [Unstressed] crossing ATT [NFL passing stat], MOR [Its cap. is Rabat], and partial A MENU [“Would you like to see ___?”]. Elsewhere there’s AT TWO (not to be confused with ATTU), CANO, the singular SCAD, IMING, ERI, and A GAL. This was enough to cause distraction and took away from the good things in the puzzle.

The theme on this one is good, but I wonder about some of the fill and cluing choices. MEH [“I’ve seen better…”]. Three stars. 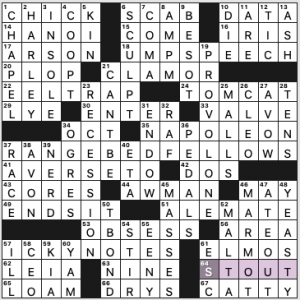 What else? The fill is pretty smooth overall, despite the inclusion of six thematic entries. Some might give a demerit for NAPOLEON and AVERSE TO being longer than the 7-letter themers, but they did have straight clues, no question-marking tomfoolery. I didn’t notice that issue while I was solving.

4.3 stars for this one. A solid Wednesday offering with a kinda fun theme and good fill, including those corners with the 6-stacks. 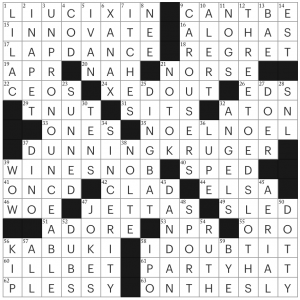 WOW, I [simply love] this puzzle. Which is to say, I ADORE it. The marquee entry is interesting (and previously unknown to me, so I just did a crash course on wikipedia), and the long 15s running down instead of across are both fabulous. The entire grid is super clean and packed with lively fill, but my favorite part of this puzzle is the clues. Wyna has a knack for evocative and/or hilarious clues, and that talent really shines through today—I laughed out loud *more than once* while solving this morning.

The central entry, the DUNNING-KRUGER effect, is clued as the [Doubly eponymous cognitive-bias effect whereby people with limited knowledge in a given domain overestimate their own competence]. This is such a precise and lengthy clue that I almost *didn’t* have to read the Wikipedia page to learn more. I wonder a little whether this clue length will be allowed in the puzzles the New Yorker decides to run in print. I’m a print subscriber, so I’ll report back (although we don’t know yet which of the three weekly puzzles will run each week). 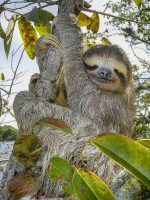 Back to this puzzle, I also love that the entry about overestimating your own competence crosses DINGBAT [Nincompoop] in the middle. This seems to me like a defining characteristic of DINGBATs! The other marquee entries are the down-15s UNPRONOUNCEABLE and THREE-TOED SLOTH. Both are great, and the clue on THREE-TOED SLOTH is also so precise and evocative: [Critters with twelve claws]. Because three toes x four paws = 12 paws = 12 claws!!! Sloth math is the best math. And I shouldn’t forget to mention the other shiny longish entries: SINCERITY / CAROUSES / LAP DANCE / I DOUBT THAT / ON THE SLY / PARTY HAT. All so good!

Overall, pretty much all the stars from me. The impeccable cluing really elevates this puzzle, and the grid is gorgeous and sparkly and clean. More Wyna puzzles, please! 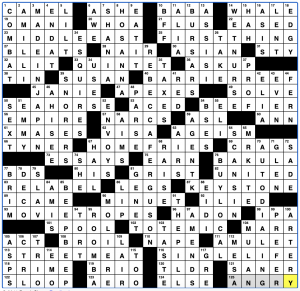 Each clue features two bracketed phrases, and the last word of the answer for each of these clues can be anagrammed to make the phrase clued that’s not in the grid:

The “Pseudonymous Twain” you’re looking for this week is SHANIA, not Mark. 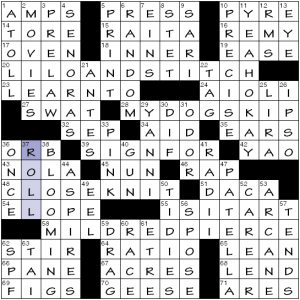 Little bit of a garden path theme today. The first two entries seem to be heading in one direction, but then the actual theme comes to light.

The actual theme, as you can see, is not movies featuring a human/canine duo, but phrases ending in words that can be verbs for things various needles do: stitch, skip, knit, pierce. Solid. 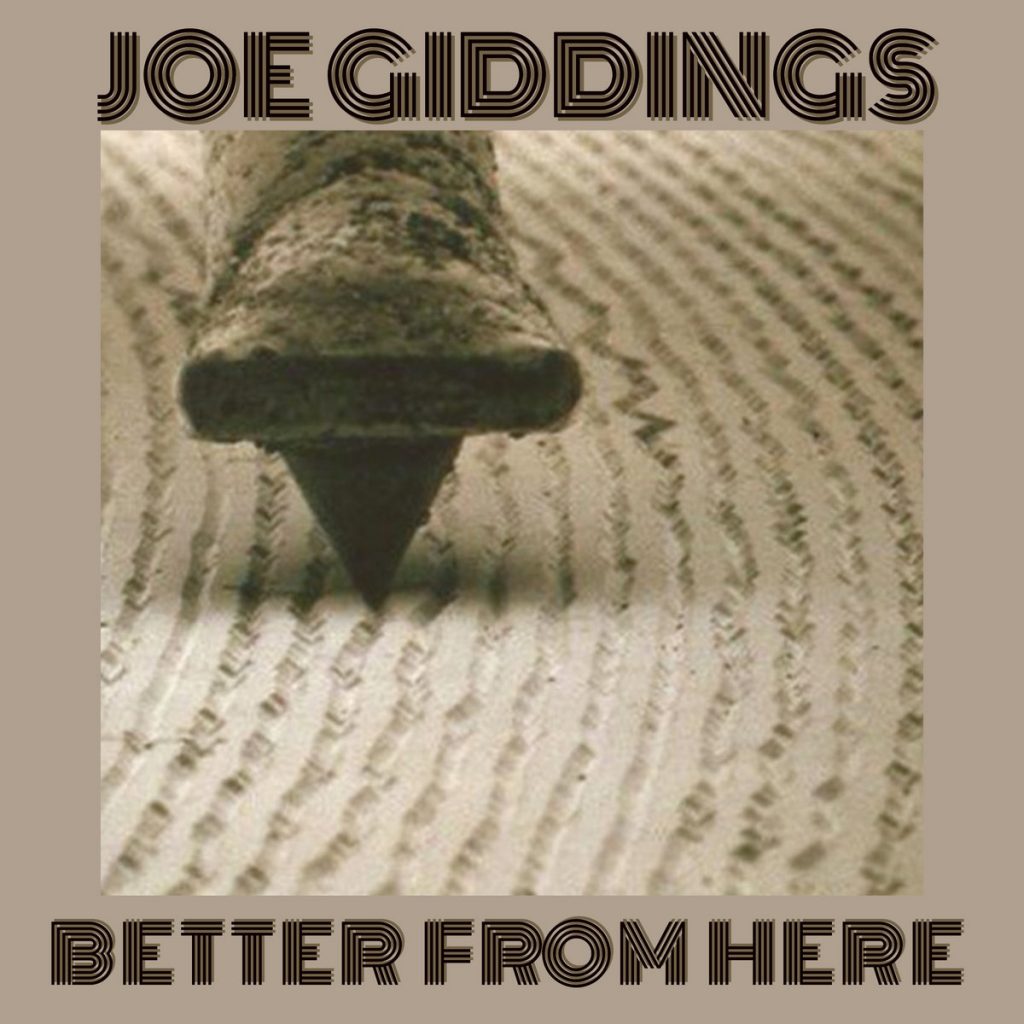 So here’s a bit of a promo for an acquaintance’s recent recording, as the theme—specifically 28-across— evoked the cover image in my mind. If well-crafted power pop/rock is your thing, it might be something you’d appreciate. Also if supporting independent artists is your groove.

Don’t tell anyone, but I think it also looks like a close-up of a lion’s face. Or perhaps a dog’s?

Let’s move on to the rest of the grid.

I was going to pick something either more obvious or more obscure, but none of the various candidates felt right—they were too boring, too loud, too annoying, or too atonal. So I’m going with a tune more predictable (for me), even though it’s a bit of a stretch. 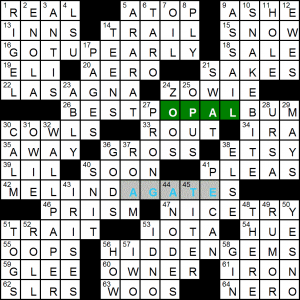 HIDDENGEM(S) is a solid revealing answer to build a puzzle around. However, especially with only three answers, you want everything to be unimpeachably tight. GOTUPEARLY is a somewhat contrived way to reach PEARL and BESTPOPALBUM, especially without a qualifying Grammy in the clues, is kind of weird. The award is currently known as the Grammy Award for Best Pop Vocal Album, and has changed names frequently. MELINDAGATES was by far the most pleasing of the three answers.

The grid does a good job of being easy and breezy with little resistance. SNAKEBITE is about the one standout entry, although “old Western” is an unusual clueing angle to choose.