Note: Fireball is a contest this week. We will have a review after the submission period ends.

There’s been a prison break, and we have multiple CONs on the lam (63d, [Prisoner who’s escaped from this puzzle’s theme answers]). Each theme answer is a well-known phrase that’s missing its usual “CON.” 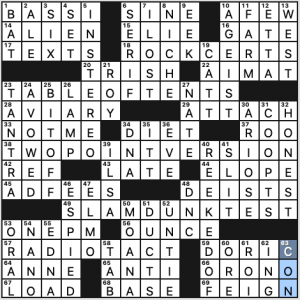 Hey, not bad, eh? None of them made me LOL, but these didn’t feel overly dry or forced, either. I liked RADIO TACT and TWO-POINT VERSION best.

I will admit that when I see this constructor’s byline I can expect some tough (i.e. subpar) fill. Yes, there is some of that here, but it didn’t seem overly distracting. ARIOSE feels the most crosswordesey, and there’s also NBAer ELIE Okobo (at least, that’s a new cluing angle for this crossword staple), and ORONO, but these are countered with things like BIT OFF, “NOT ME,” REEKED OF, and IN STEREO.

I was nearly stuck beyond hope in that NW section with 1a [Low men]. I stared at _AS_I for quite a while. The crosser at 3d [When both hands are aligned] sure looked like it wanted a Roman numeral with _IX. Finally, the musical angle for 1a occurred to me, and I was able to finish. 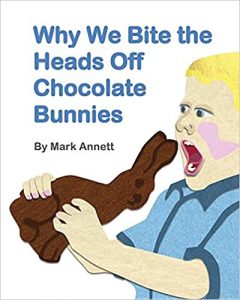 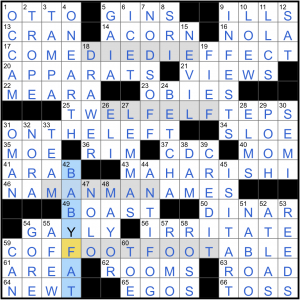 I apologize for this “song”, but it’s all my brain can think of with FOOT FOOT in the grid.  These are The Shaggs, possibly the worst recorded band ON EARTH.

Other nice grid bits: APPARATS, ON THE LEFT (the “Proper way to pass”), MAHARISHI, LEMMAS, IS IT ART (referencing Maurizio Cattelan’s banana duct-taped to a wall in the clue!), BABY FAT, and ANTI-FOG.

I feel like this puzzle should come with one of those old-timey whistling sound effects.

THEME: The word WEED can be unscrambled in phrases 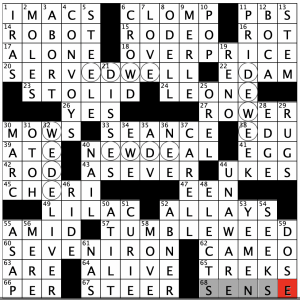 Well, I saw that WEED was anagrammed early on, but for the life of me could not guess the revealer ahead of time, so that is what built the suspense of the puzzle for me. In though it was going to be a marijuana reference. Some pun with POT in it or something like that.

Standard solve for me north to south. Forgot that “Remington STEELE” existed. Vaguely remember seeing that as a kid, but couldn’t tell you the premise at all. And got a little chuckle out of the clue for YES [Unexpected response to “Are you asleep?”].

This puzzle is much better served with circles in the grid, which is offered here on this site, but the bulk of solvers are still being asked to count letters, mentally circle them, and mentally unscramble them. Weird. 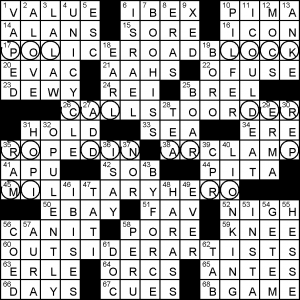 OUTSIDERARTISTS is an interesting spanning entry to build from. The choice of artists seems centred on the mid-20th century, white & male, which is an… interesting contrast with that starting point.

The theme is extremely busy, occupying 68 grid squares. That’s why the opening corner has plural ALANS (not the tribe) crossing weird partial ALOVE. It improves from there, with BOOHISS and ICOULDEAT (which I think I’ve only heard via Weird Al’s Trapped in the Drive-Thru).

Clueing “fail”: “The Hobbit” soldiers are mostly goblins as ORCS weren’t totally conceived of yet by Tolkien when he wrote that. Apparently the film has retrofitted orcs into it, so it is defensible, but I won’t be the only one irked by this clue.

German tennis player ANKE Huber is quite tier II, but I was pleased to see her. She won 12 titles and reached number four in the world, but she only had one grand slam final (lost to Seles) and her record against the best of her era was poor.