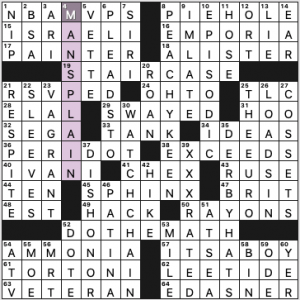 My solving time is likely longer than the puzzle’s difficulty level would merit. I am sleepy! Kept typing answers in the wrong space or wrong direction, or typing the wrong letters.

Alrighty then, what have we got here? Fave fill: PIE-HOLE, SPHINX, “DO THE MATH,” MANSPLAIN, PEACHY-KEEN. Less keen on ORT, EST, ROAN, YER.

What sort of vibe am I getting here? Let’s call it 3.8 stars. The puzzle felt rather more man-centric (even with MANSPLAIN in there) than I like, in terms of the overall fill and clues. 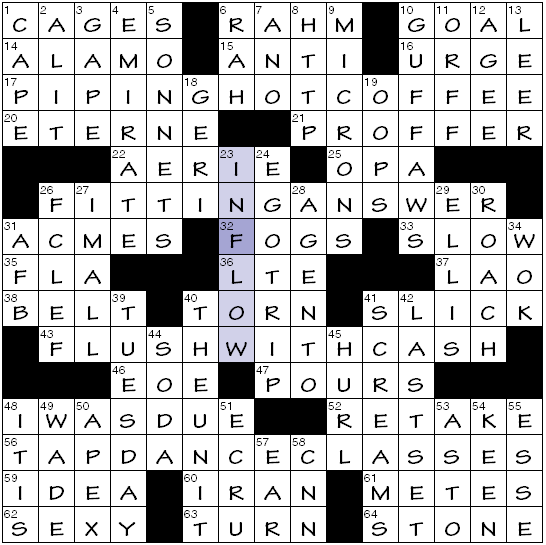 I definitely recall at least one plumbing-themed crossword, but it wasn’t recent. So let’s go.

I’m tempted to say 23d [Donations to a fund drive, say] INFLOW is part of the theme, but as its symmetrical complement is Emma Thompson’s AGENT O, that’s a no. Instead I’ll rule INFLOW as theme-adjacent.

And speaking of little time, got to run. Honest, I tried to find a good plumbing song. Big Joe Turner’s “Call the Plumber” would’ve been nice, but the only version on YouTube was undesirable. 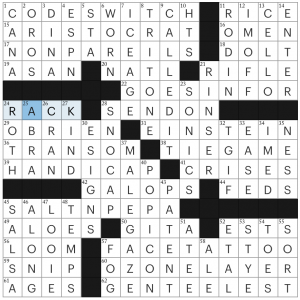 The long entries today were in the NW (CODE-SWITCH, ARISTOCRAT, NONPAREILS), SE (FACE TATTOO, OZONE LAYER, GENTEELEST), with a few others scattered throughout (SALT’N’PEPA, GOES IN FOR, MALE GAZE, CALLED IT!). I like most of these a lot, although I’m not sold on GENTEELEST. I enjoyed the NONPAREIL/SNOCAP cross-reference– SNOCAPs used to be my go-to movie snack, back when we could go to movies. 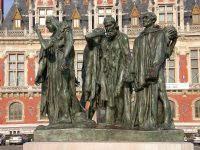 the burghers of calais

The higher-than-your-average-Friday difficulty for me is due to the knowledge base that Anna’s puzzles are built, which on is always a little outside my wheelhouse. Even her easier puzzles bring in arts-and-culture trivia that I get to learn from, instead of blazing through. See, for example, “The Burghers of Calais.” I know who RODIN is, but I’ve never heard of this sculpture, and now I’ve learned about it (and the event it commemorates, the siege of Calais during the Hundred Years’ War). Seems like a real missed opportunity that no one in Calais has opened a restaurant called the Burgers of Calais (I checked). See also the quote in the clue for MALE GAZE [It “projects its phantasy on to the female figure,” per the film theorist Laura Mulvey]. I didn’t know film theorist Laura Mulvey (and I couldn’t tell you why phantasy is spelled with a ph), so again I learned something new about a term I’d encountered before.

One last note on cluing voice and difficulty levels: this week, my friend Brooke Husic and I also published a puzzle with (spoiler alert) ABRA in it on Amanda Rafkin’s indie blog Brain Candy. Because we knew our audience would mostly be indie-puzzle-solvers, and because we were trying to write a harder puzzle, we weren’t concerned about guiding the solver to the answer the way Anna did with her clue. She clued ABRA as [Pokémon that, aptly, evolves into Kadabra]. I love this clue because, for anyone not at all familiar with Pokémon, there’s an obvious connection from ABRA to Kadabra. Brooke and I clued ABRA as [Pokémon that might eventually become Alakazam], which is the evolution of a Kadabra. This clue eliminates the hand-holding but still retains an element of guessability if you get a few of the crosses and are familiar with “magic words.” I think this is a neat case study in ways to scale up or down the difficulty of clues, and in some of the more subtle differences between indie and mainstream crossword publications.

Overall, I enjoyed this puzzle and learned some things along the way, which is not so common with these easy Fridays. Lots of stars from me.

Happy Lunar New Year! It’s a good time to have a(n outdoor) TAILGATE party, per this puzzle (60a, [Pregame festivity site, and a hint to the inserted letters at the starred answers’ ends]). Each of the theme answers is a well-known phrase with a single added letter at the end. Collectively, those letters spell GATE. Thus we have a tail GATE. Got it? 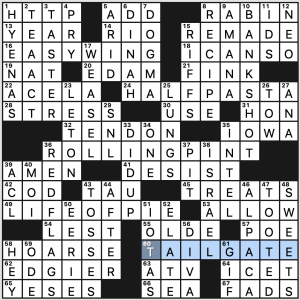 It’s a pretty fancy TAILGATE party that has pasta and pie, but I’ll take it.  At first, I didn’t get the party food connection, but the title makes it clear. I enjoyed that extra layer of thematic consistency once I spotted it.

An 11-letter central themer really messes with the structure of a grid. Our constructors dealt with it by way of those large chunks of blocks in the east and west. The end result is that the grid is nearly bisected and lacks any juicy extra-long Down entries. But on the other hand, there’s nothing too iffy anywhere, and we still get RED FLAGS and BANK SHOT which are nice.

Clues are fairly straightforward. I did like 17d [Animal in a pop song?] for WEASEL. Cute.

I enjoyed Layla’s solo debut! I learned a lot from this puzzle, none of which had anything to do with the theme. I had no idea about the theme until I hit the revealer, which told me which answers were theme answers. 43a [Final layer….or a hint to 3-, 10-, 22-, and 25-Down] is TOP COAT. 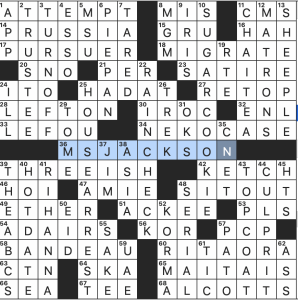 What I didn’t know before I did this puzzle: that there’s a character named GRU in “Despicable Me” or that a SNOCat is featured in “The Shining.” I also had no idea that LEFOU was the first openly gay Disney character. I haven’t seen either the animated or live-action “Beauty and the Beast” because I’m not a fan of stories where abusive abductors end up as romantic heroes, even if the heroine is a book lover. Leaving my limited movie knowledge behind, I didn’t know that Outkast recorded an apology to MS JACKSON.