This week, we’re looking for a well-known rom-com.

… which, maybe you’ll have what I’m having? What!? It’s just a pastrami sandwich from Katz’s Deli, don’t get all excited. 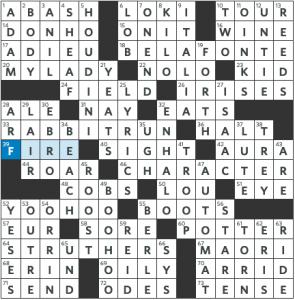 Waiter, there is too much pepper on my paprikash. But I would be happy to partake of your pecan pie. The well-known rom-com is, of course, WHEN HARRY MET SALLY, as the HARRYs and SALLYs “meet” in the grid.

Can’t remember if either Harry or Sally solved puzzles in the film, but a crossword did once appear in SALLY FORTH:

Do you want to make more money? Train at home for a better career!