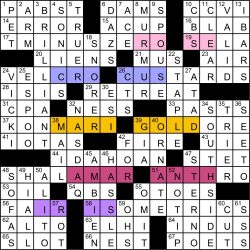 Good day, everybody! Hope all is well with you, and hope that you’re doing your best to withstand what has been a tough winter weatherwise for a number of people across the country.

Soon enough, spring will be upon us and we will be able to see the flowers bloom and think about the pleasant times that have been had in springtimes past and, hopefully, in the future. With that in mind, we have a puzzle that features the names of five flowers in the five rows featuring circles. However, they span two different answers. No worries, though! The sixth entry involving the theme, CUT, acts as the reveal (60D: [___ flowers (bouquet arrangement…and a hint to the puzzle theme!).

Oh, and a nod to SHALAMAR? Bonus!!

Though there’s lots of lovely fill in the grid, but the two paralleling long down entries caught my attention the most. First off, I had a wonderful time on the SOUTH SIDE in the summer of 2019 as I helped out a friend, ESPN college basketball reporter and Coastal Carolina University basketball legend Brooke Weisbrod (weiss-BROD [as in road]), in being a small part of her sports/writing skills/broadcasting summer camp she founded to give back to Chicago public school children, Skills and Score (34D: [Chicago area where you’ll find the Victory Monument]). Unfortunately, this is the area of Chi-town that usually is hinted at — mostly by right-wing media and those unwilling to completely understand complexities/avoid reckonings with their own biases and ignorance involving race relations — when the racist dog whistle of “But look what’s happening in Chicago?” is blown over and over again. It was such an honor going to Percy L. Julian High School and meet some amazing kids, as they were exposed to professional basketball teaching, video editing, on-camera training and more! Definitely encourage you to take a look at the great work Brooke and her staff have done the past few years there.

The other entry, BRILLIANT, for some reason, made me think of the old Guinness commercials that were briefly yet wildly popular about 20 years ago (3D: [Brit’s “Excellent!”). Brilliant!!!

“Sports will make you smarter” moment of the day: SONICS (49A: [Former Seattle team, familiarly]) – No exquisite explanations. No descriptions about rules or teams or players. Just a nod to one of the most-beloved teams in the NBA, currently now playing as the Oklahoma City Thunder after moving from the Emerald City in 2008. Though born and raised in New York, I (and many, many, many others) miss the Seattle SuperSonics…and their amazing logo! 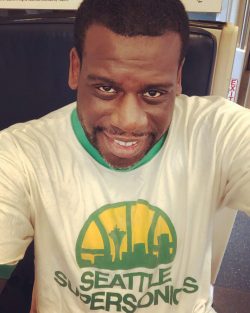 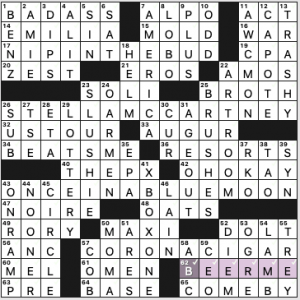 Fun theme for a decadent day, Fat Tuesday. Have you made plans to acquire pączki? Those are the Polish variety of filled donuts traditionally eaten on Pączki Day. We picked up some from a bakery on Saturday, before the bottom dropped out of the thermometer and the snowstorm socked us in. Apricot, raspberry, and an assortment of custard/cream cheese fillings.

Fill I liked: BADASS, SLUSHIE, THE PX (I still have some kitchenware my in-laws bought at the PX!), AGE OUT, and “AW, C’MON!”

Fill that might be on the tricky side for newbies: SOLI; 49a. [___ Storm and the Hurricanes (Ringo’s band before the Beatles)], RORY (heck, I’d never seen that one before); AMIE; T.S.E. for T.S. Eliot’s initials; RKO. 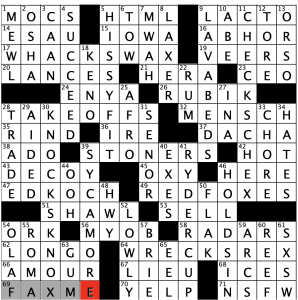 Nice, tight theme. I like the added consistency of the X’s as the base word. Homophone themes like this are typically very easy and can be big gimmes since you really only need to determine part of the answer. This was no exception.

I was thoroughly enjoying the grid too… right until I hit that SW corner. Then LONG O, AMOUR (which I initially entered as AMORE) and FAX ME (?!?!) got me all sorts of screwed up. And for some reason I couldn’t stop trying to think of body parts that could be stuck under a desk rather than the correct GUM. Me: LEG?  EAR? TOE? Ah… it’s GAM. That’s definitely it. 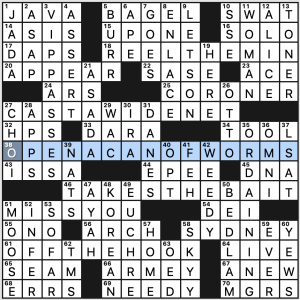 I really wanted these to be in procedural order, in which case OPEN A CAN OF WORMS would come first (do worms actually come in cans?!). Also, CAST A WIDE NET is definitely fishing-related, but it feels different because it’s a different style of fishing than the more common rod and reel (which is implied in all the other entries). But I’m over-thinking it. The theme is fishing-related idioms, and all of these fit that theme regardless of order or fishing method.

Lately in crossword circles, we’ve been having discussions of what’s crossword-worthy and what isn’t, especially with respect to foreign (i.e. non-American) names and terms. I don’t know golfer K. J. CHOI, but Wikipedia labels him Asia’s most successful golfer, and he spent 40 weeks in the top-10 of world rankings. Clearly crossword-worthy. AYAH [Indian maid], on the other hand, I would argue isn’t—at least not on a Tuesday.

VIP PASSES, BEDLAM, and “MISS YOU” top my list of fill, though I would gladly give up the latter to get an alternative to AYAH.

I liked the idiomatic theme entries. I wanted more from them, but they’re solid enough as is. 3.5 stars. 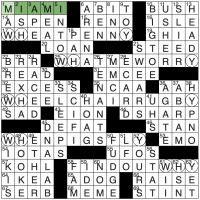 Got the puzzle a little later than usual, since Matt is stuck in that bad weather in the Pacific Northwest that normally doesn’t get snow. Matt said his power was out, so he was doing a lot from his phone. But the Jonesin’ puzzle continues! The weather affected my blogging time a bit as well, as we had to dig out from a foot of snow that fell Monday night/Tuesday morning. But on we go! The title hints at what is going on:

Matt always finds fun them entries, and this puzzle is no different. 25A especially hits home, since I read Mad magazine a LOT when I was younger. I think it is still being made, but I am not sure since I go to stores rarely. And I am curious to watch the doc Murderball that is mentioned as well. How is that sport even possible?? Another great entertaining Jonesin’ puzzle. 4.7 stars today.

Hopefully our lives are somewhat back to normal next week. At least without weather disruptions; everything else is still FAR from normal. 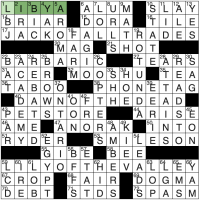 I had to add John Witzke to the constructor database, so is this a debut? If so, we have a clever puzzle from this pair. Here are the theme entries:

Nicely done! We have phrases that are “__ of the __” that have first words that can double as first names, which makes for some intriguing clues. This was an entertaining solve, and this is another one of those puzzles you could use to introduce someone to the crossword world. If this is a debut, congratulations! 4.6 stars from me.