I love this spin on a President’s Day puzzle! Each theme answer includes the name of a Presidential Pooch with the Prez in brackets. Thanks to Bryan in the comments and Tracy in my Email for alerting me to a glaring omission in my list of theme answers! I also missed that this is Meconya Alford’s NYT debut. When we have a constructor’s name in our list of tags, I figure they’re not new, and her name was familiar. That’s because I reviewed her Inkubator puzzle a few weeks ago. She’s been busy, especially since this puzzle must have been constructed after November 3. 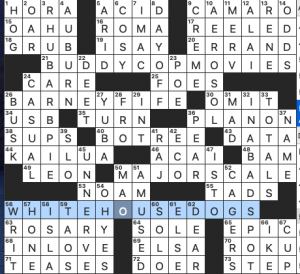 And the revealer at 56a, [What the starts of 21-, 26-, 40-, and 50-Across are, for the presidents in their clues]: WHITE HOUSE DOGS. When I came back to edit the puzle, I realized that the dogs appear in order of succession: Clinton, George W Bush, Obama, Biden. This is an even better puzzle than I initially realized!

I love dogs. One of the things I love about doing home visits is that I get to meet people’s dogs. Dog-centric puzzles make me smile even with one iffy theme entry. There’s a bonus puppy I’ll mention later.

What I didn’t know before I did this puzzle: that IKE had a dog named Heidi (bonus puppy!). 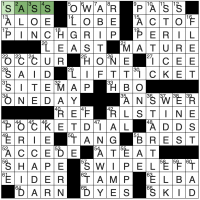 Derek here subbing for Stella on a Monday LAT for a good reason: this IS Stella’s puzzle! Let’s list the theme entries:

I am getting old and slow, so it took me a minute to “grasp” the theme, but the starred clues all start with a word that means swipe on the left side of the entry. Pretty simple for a Monday, and certainly easy by Stella standards. (Disclaimer: I have NEVER been on Tinder! But they “tell” me that if you swipe left it is a big fat no, but if you swipe right it is game on!) Nicely done for a Monday; it was only I that made it needlessly complicated! 4.3 stars from me.

Tune in on Tuesday for my usual LAT gig. Have a great day! 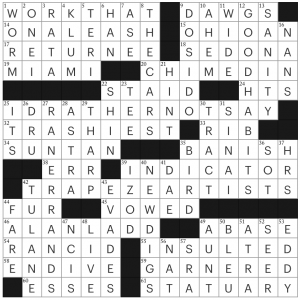 This was fun and not that hard! The long entries shine and the medium fill is also pretty solid, although the short fill wasn’t ideal. Quick writeup today:

The marquees are I’D RATHER NOT SAY and TRAPEZE ARTISTS, both with spot-on clues [Polite answer to “How much money do you make?”] and [Ones whose jobs are up in the air?]. PSA: if your colleagues ask you how much money you make, it may be because they suspect there is a gendered wage gap, and you should just tell them! Also, is this puzzle a morality play about officework? See parallel long downs GOOD HABITS [Meeting deadlines, being punctual, etc.] / RAN ERRANDS [Served as an office gofer]. The stacks in the NW and SE are also pretty good: WORK THAT / ON A LEASH / RETURNEE / INSULTED / GARNERED / STATUARY. I’d say WORK THAT is my favorite, and RETURNEE is kind of just there, but generally solid stuff

Overall, several stars for the long entries and solid cluing. See you Weds!

I spent a not insignificant amount of time editing this crossword’s grid to look kind of like a QR code with the intention of scanning it to see what the result might be. Unfortunately, my labors were in vain, as it lacks the identifying trio of concentric squares in the corners, and even had I inserted those, the grid possesses the wrong resolution. Plus, there are numerous other standards.

So on to the puzzle itself. The theme is simply two-word phrases with the initials QR.

I mean, I suppose I could play around with that grid some more. Perhaps quadruple it and add those alignment figures and whatever else is needed … but frankly, that’s TOO (16a) much work dedicated to what is probably a fruitless exercise.