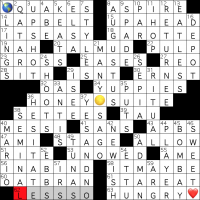 hello and welcome to episode #663 of matt gaffney’s weekly crossword contest, “Three in a Row”. for this week 2 puzzle, the instructions tell us that we are looking for a #1 hit of the 1980s. okay, what are the theme answers? this is a rebus puzzle with three different rebus squares:

it’s possible i’ve missed something, but i don’t think there’s any other thematic content in the crossword to hint at the meta answer. the rebus squares are interesting in that they are all part of longish answers; in particular, HONEY[MOON] SUITE and MANY [MOON]S AGO are the longest entries in the grid, so even though there are, in some sense, only three “theme” squares, the theme reaches into every corner of the grid.

i thought this meta was … fine. the idea of representing an “eclipse” as an alignment of rebus squares is interesting, but it left me wanting a little more. i also wonder about the accessibility of the puzzle to a younger audience—anybody who didn’t know the song off the top of their head would have, i think, an unenviable task of looking through an exhaustive list of 1980s #1 songs to find it, since, for example, googling for “earth moon heart” in combination with “song” or “billboard” or “#1 hit” wouldn’t turn up anything useful. it’s a pretty famous song for gen Xers (and older), and millennials who know pop music well would certainly be familiar with it, though, so maybe i’m just imagining a nonexistent solver who doesn’t know the song.

the flip side to all of that is that there is something fundamentally entertaining about this song and, especially, its outrageously overwrought music video in which bonnie tyler’s extremely ’80s hair is somehow not among the ten most over-the-top visual elements. i just rewatched the video, and let me tell you, every now and then i fell apart. specifically, every time i saw those glowing demon eyes, i absolutely lost it. the combination fencing/swimming team also has pretty high comedic effect.

all right, that’s all i’ve got this week. how’d you like this meta?