I scream, you scream, this theme’s about ice cream. Specifically, it’s a before-and-after theme starring some popular ice cream flavors. 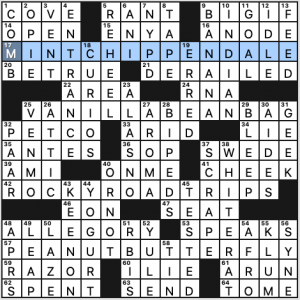 Nice. I like a good before-and-after theme, and these were mostly fun. But is peanut butter an actual ice cream flavor? Isn’t it usually paired with something like chocolate?

In the fill we have a couple theme-adjacent entries: BANANA [Split requirement] and YOGURT [Frozen ___ (ice cream alternative)]. ALLEGORY, “ALAS, NO,” VENMO, and WHITE RAT top my list of top fill, but are lab rats necessarily white? I did not know the Springsteen song “BE TRUE,” but I was always more of an ENYA-listener. 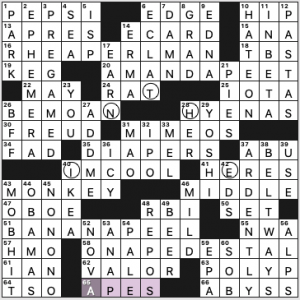 Oh, hey! It’s not every day you open the puzzle and say “I know that guy from Twitter.” David Harris makes his paid constructing debut here (he was also published in the Grids for Good fundraiser puzzle pack and shares his crosswords via a blog). Co-constructor Evan Kalish, of course, is a familiar name from puzzle bylines and post office Twitter.

And then a different sort of primate enters the theme: 43a. [With the circled letters and 46-Across, playground keep-away game], MONKEY / IN THE / MIDDLE. Monkeys aren’t apes, of course. The circled letters form a parabolic arch like the ball thrown by the mean kids on the playground. Nope, I do not have fond memories of playing monkey in the middle!

Fave fill: PREGAMED, EPHEMERA, HATE ON, OBAMAS. Mad at: General TSO at 64a, because I had an adjacent-key typo in TSP and that looks like an entirely plausible entry when you are scanning the Acrosses for typos. When folks on Twitter are reporting faster-than-usual Wednesday times, while I watched the clock keep ticking during thta typo search … sigh.

Four stars from me. Over and out. 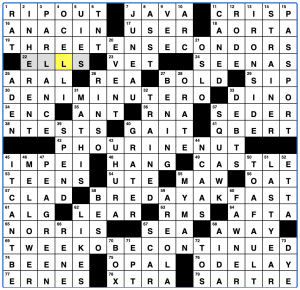 Each of the theme entries in this week’s AVCX from BEQ needs a little more time:

We’ve got some phrases (like THREE TENORS, Robert DENIRO, PINE NUT, BREAKFAST, and TO BE CONTINUED) that each have taken a progressively longer unit of time – SECOND, MINUTE, HOUR, DAY, WEEK.  It’s that last part I find particularly impressive with this grid – I didn’t notice it until I started writing things up, and it adds some extra elegance to the theme.

Elsewhere in the grid, this was light on BEQ’s usual musical touches, but there was still plenty to love, fill-wise: RIP OUT (“Take, as a page from someone’s book?”), SEDER, QBERT (the “Titular video game character that speaks in grawlixes when captured”), Beck’s ODELAY, INHERENT, PARLANCE, MELLOWER, and TO A FAULT.

I’m sad that I only have a short amount of time to write about this puzzle (I have to teach in half an hour), because it was just lovely. Notes are all bullet points today in the interest of squeezing in as much content as possible:

Ok that’s it, I’m off to teach! Loved this puzzle and everything about it, all the stars from me. 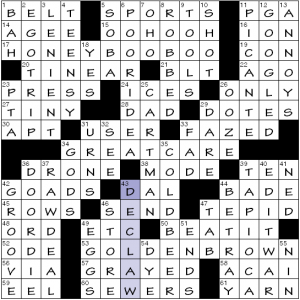 Uh-oh. The theme itself is bearable, but there was so much content that I found distasteful that the crossword overall ANNOYS (13d) me.

But let’s deal with the theme first. Two-word names and phrases, each part of which can precede ‘bear’. 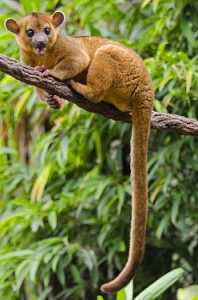 (The Snatch scene is too graphically violent for tender eyes such as yours, reader.)

More stuff that upset me:

Alright, let’s see what I can salvage.

Overall, the grid fill is clean, without too much ‘glue’, so that’s a positive. Despite that, it bears repeating that this puzzle upset me overmuch. 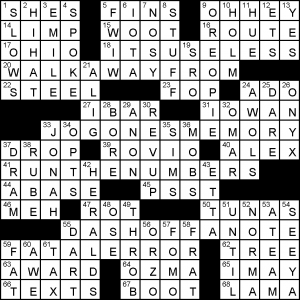 A theme we’ve seen before – gaits – in this case ordered from slow (WALK, JOG) to fast (RUN, DASH). The first two entries, WALKAWAYFROM and JOGONESMEMORY, felt less elegant than RUNTHENUMBERS and DASHOFFANOTE; WALKAWAYFROM is also the least figurative of the themers (though still somewhat so).

There’s a lot of chat in the puzzle: OHHEY, WOOT, ITSUSELESS, PSST, SEEYA and TEXT(S) speak in FOMO and FWIW (and WOOT again).