The central revealer is JUST A BIT OUTSIDE [Ball call, and a hint for entering eight answers].  This sounds like something an announcer might say, not an official call from the umpire. Regardless, what’s going on here is that each of the eight answers mentioned in the revealer clue has the trigram BIT missing from either the beginning or the end. I’m not keen on the extraneous “JUST,” but it gets the phrase to fit nicely as a central grid-spanner. 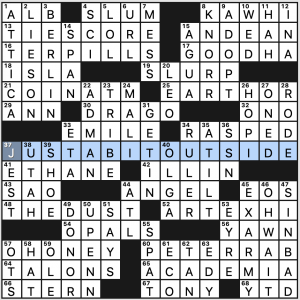 The revealer did its job here. I was mostly lost after the first four entries looking for the missing letters, but getting the aha moment made the bottom half of the grid much more smooth. I still don’t quite buy that it’s a commonly accepted phrase, but as the basis for a puzzle—like I said—it does the job.

With the four pairs of theme answers and the 15-letter revealer, there’s only one other pair of longish answers: TIE SCORE and ACADEMIA (both very nice).

But the heavy load of theme material is felt in the fill starting off with ALB at 1a. It continues with ATILT, EX-ARMY, ONE-D, AD MAN, and plural OTS on top of crossword staples ONO, EMILE, ETHANE, ECO, EOS, EDY, etc. I would much rather solve a puzzle with six themers in addition to the revealer so that the grid would have room for cleaner, sparklier fill.

I didn’t know NBAer KAWHI Leonard, but I don’t mind learning about him. (Apparently he’s number 9 on the all-time list of players with the largest hands.)

I ended up enjoying this theme, but the surrounding fill sapped its strength to a degree. 3.4 stars. 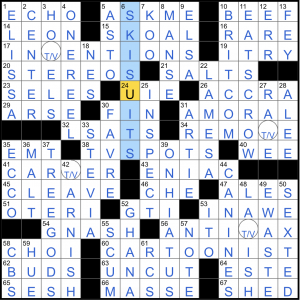 This isn’t my favorite genre of Thursday puzzle that pops up in the Times, but this is solidly executed.

ASK ME what my favorite BRITCOM is, and I’ll tell you The Vicar of Dibley, for moments like this.

A woman co-wrote this Fireball! I’m not familiar with Rob’s work although Peter’s note says he’s been published in the LAT, so I might have done one of his puzzles and forgotten the byline. Jennifer is one of those names that always makes me smile when I see it. I like her puzzles and I’m usually on her wavelength. Not so much this time. It’s a good puzzle. I’m not a fan of anagrams, I’m not very good at anagrams, and this puzzle is full of anagrams. 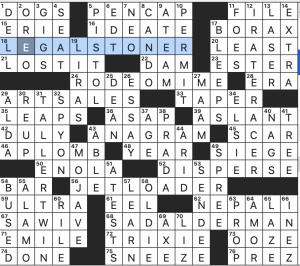 As I said, a lot of theme material, and as is often the case, the fill suffers. I don’t like ASLANT, which I never see outside of crosswords. We also have IDEATE (same issue) and SENDEE, which is a roll-your-own. A [Letter getter] is a RECIPIENT.

What I didn’t know before I did this puzzle: that there’s a football formation called the PISTOL and that the motto of the Seabees is CAN DO.

Trust Brendan to take a tried-and-true theme idea and spin it in a way that you’ll never see in a mainstream puzzle outlet. Each theme answer has M+vowel added to the beginning of a name or phrase. The vowels go in order: A, E, I, O, U. I didn’t see Y. 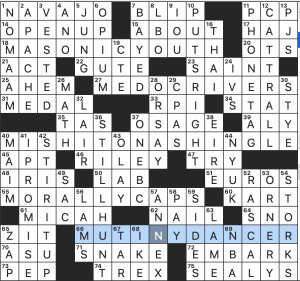 Neat and consistent. All the base phrases are in the language and 40a is worth the price of admission. Which reminds me: if you enjoy doing these puzzles, head over to Brendan’s tip jar and thank him for all the fun.

What I didn’t know before I did this puzzle: never heard of RILEY Gale. 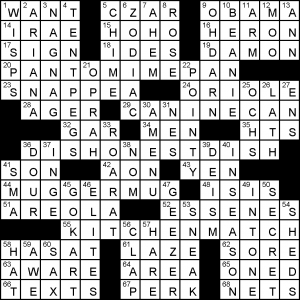 I’ve never heard of a KITCHENMATCH before. It seems to be an oversize match for lighting gas stoves. Never had much exposure to non-electric stoves in general. The rest of theme is slightly oddball. MUG, DISH, CAN and PAN appear to be “matched” with words that begin with them, creating wacky answers. It seems a bit slight to me, but I guess it’s at least something a bit different. Also, I’m not sure I’d call a MUGGER a petty criminal? MUGGING implies assault, does it not?

ROARAT – to me this makes me envisage Brian Blessed…
Interesting contrast between HERON, clued accurately as [Egret, for one] and HARE. True egrets are one genus,

, in the heron family Ardeidae. True HAREs belong to one genus, Lepus, in the rabbit family Leporidae. There is no way to define rabbit that is monophyletic without including hares. 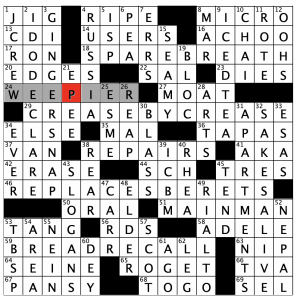 THEME: RE has been added twice to common phrases

I found this one very enjoyable today. A little twist on the “Add Some Letters” theme with RE being in there twice. A great revealer. Solid wacky phrases. What else could you want?

I really struggled in the center of the puzzle as I was having difficulty seeing CREASE BY CREASE (I was looking for a two word phrase). The fill in that area was rough for me too. BLASS was only vaguely familiar, and I misinterpreted the clue [Prefix for adjusted],  wracking by brain for a prefix that meant adjusted rather than one that preceded the word. And while I appreciate a fresh clue, the one for ESME was out of my reach (despite the Squalor nudge in the clue). I figured it out though, and I’m definitely not complaining about being a little puzzled. That’s the point of a puzzle.

Spa bath? I’m unfamiliar with that as a phrase. Been a long time since I’ve been to a spa.

What a fantastic title! I almost forgot to mention that.