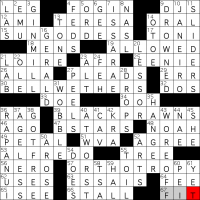 hello and welcome to episode #664 of matt gaffney’s weekly crossword contest, “Leading by Example”. for this week 3 puzzle, the instructions tell us that we are looking for a phrase comprised of two three-letter words. okay, what are the theme answers? there are six across answers with *ed clues:

so what’s going on here? the title suggests looking at the starts of these answers, or maybe that they contain the starts of examples of … something. ORTHOTROPY certainly jumps out here, since it’s such an unusual word. even if matt needed, say, ORTHO- for the theme, he could have used a much more familiar word like ORTHOPEDIC. so maybe both halves of the word are important. other -TROPY words are ISOTROPY (kind of the opposite of orthotropy) and ENTROPY, which is intriguing because EN- sounds like a letter, and i expect we’re supposed to extract one letter from each theme answer to arrive at the six-letter meta answer. but i don’t see anything else like that going on with the other themers.

what else? i thought about the initial letters of the theme clues (or other clues), but that didn’t seem to go anywhere; the ALFREDO clue in particular was not helpful. i think the clues are basically natural-sounding enough that they probably do not contain hidden constraints.

BLACK PRAWNS minus one letter is BLACK PAWNS, a set of eight that (knowing matt’s proclivity to include chess content) might figure into a meta, but it’s not really possible to remove a letter from the other answers.

the clue for ALFREDO is a little curious, since it would be much more natural to clue it in relation to fettuccine alfredo (or alfredo sauce); pacino is never called anything but al. i thought that might mean we’re supposed to be thinking about pasta or sauce, but i don’t see what to do with that in relation to the other themers. thinking about the start (“leading”) of this answer gives me ALF, which is definitely something, but it does not appear to be something related to anything else in the puzzle.

is there other thematic content in the grid besides these six answers? hard to say. my eye was drawn to the entry {Montaigne classic} ESSAIS, which, while it is a classic of sorts in the field of philosophy, is a significantly less desirable crossword entry than ESSAYS, which it could have been with only a small tweak in the grid. so maybe something in that section is related to a theme answer.

if there are extra answers in the grid that are thematic, they are probably 3-letter answers, given the instructions. the grid contains 29 such answers, which is a lot. in fact, i’ve just now noticed that it’s an odd number, which ordinarily ought to mean that exactly one of the 3-letter answers is centered in the grid—but the central square in this grid is a black square, which means that the grid is asymmetric! the black square before 9a DJS is opposite the final E of 65a I SEE. that’s certainly curious. does it help at all? it does suggest that perhaps DJS is significant, or maybe just that something else in that corner was necessary to make the theme work, since the only part of that corner that is constrained by the overt theme entries is the end of ALLOWED, which is not much of a constraint on the corner. 10d JANEIRO is an unusual entry that suggests the three-letter word RIO (much more commonly seen than JANEIRO in crosswords).

well, i haven’t got anything and the deadline is upon us. looks like a pretty tough week 3, as i have no idea whether i was at any point even on the right track. what’d i miss?