Yes, it is! And a delightful puzzle, at that.

The theme is self-referential. You might even call it meta. 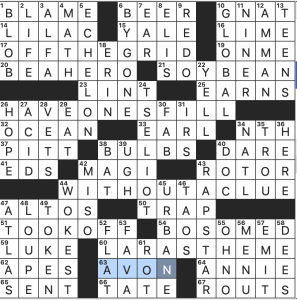 What I didn’t know before I did this puzzle: never heard of EARL Sweatshirt. 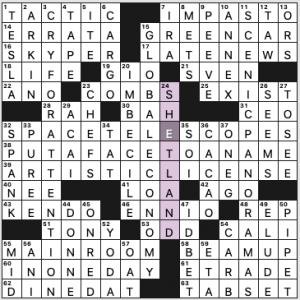 Me, I didn’t much enjoy this puzzle—too many Scowl-o-Meter moments. But another solver tweeted that she found the puzzle fun, so my opinion’s certainly not unanimous.

The 15s—a stacked trio with two uprights—are all solid: SPACE TELESCOPES, PUT A FACE TO A NAME, and ARTISTIC LICENSE crossed by a CRY FOR ATTENTION and SCENIC PANORAMAS. Other nice fill includes IMPASTO, BEAM UP, and SHETLAND. I’ll bet I wasn’t the only one who quickly entered SCOTLAND for 24d. [Northernmost part of the U.K.]. I hadn’t known the Shetland Islands were also just called Shetland. It’s wild how close Shetland is to Norway. (I groused at having TELOSCOPE in there, and had not looked at the 30a clue so BAC was nearly as plausible as BAH.

Did not know: 55a. [Club’s premier venue], MAIN ROOM. It’s inferrable, but out of my ken. Now, I did once go to First Avenue in Minneapolis, but not the Mainroom, just the 7th Street Entry. Also wasn’t loving that corner of the grid. IN ONE DAY felt contrived, and AN I, ON RED, and DINED AT made the section feel overloaded with flat two-letter words.

Also never heard of 19a. [Italian architect Ponti], GIO. Along with buildings, he designed, I see from a Google image search, lots of MIDcentury Modern furniture and a $15,000 chandelier.

Nobody asked, but if you’re curious to know what other entries irked me, this paragraph is for you! GREEN CAR, LATE NEWS, ñ-less ANO, -ITE (McCarthyism, sure, but when do we see McCarthyITE?), crosswordese [Large marble] TAW, TO SEE, ONE G, SOI, plural ORS (the conjunction), I’D BET…. Felt like more trade-offs than I’d like to see for a good set of 15s, but your mileage may vary. 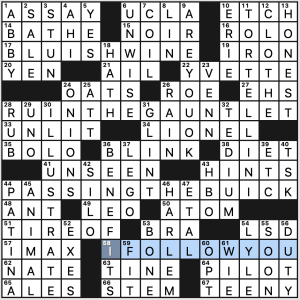 I like the add-a-letter theme, and I like the extra constraint of having I’s follow U’s, but it just doesn’t look right to have the rule applied to only three of the four U’s in the theme answers. There are plenty of “run” phrases and probably enough “buck” phrases to find a different pair of themers.

Aside from that nit, the fill offers up nice long entries ILLUSTRATE, BENEFITS, “ARE YOU OK?,” and TORTELLINI. I also liked YVETTE, PATINA, and TEDIUM. Nothing much to scowl at except maybe the little bit of a dupe between ETC and ET AL.

Jim Q filling in for pannonica since she was kind enough to cover Universal for me yesterday!

THEME: Two word phrases where the second word is three letters and its “inside” (or central) letter is moved to the outside to form a new three letter word. Wackiness ensues. 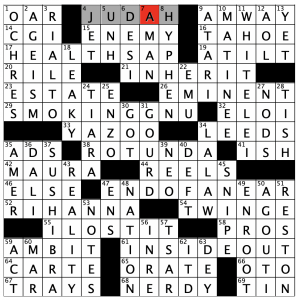 I solved this puzzle when I’d normally be solving Universal, and for some reason I thought it was the Universal. I was wondering why it was so difficult for me to find a foothold! It’s been a while since I’ve solved LAT and I’d forgotten that its difficulty is graduated throughout the week.

I really like the theme here- it led to a nice AHA moment- but it felt to me as if the fill suffered quite a bit under the weight of so many themers. So it was tough for me to fully enjoy. Much of it felt dated to me, or at least Crosswordese-y. YAZOO, ATILT, A MAN (though A Man Called Ove was an absolutely delightful book. Haven’t seen the movie…), ELOI, LEEDS, MAURA, AGOUTI, IN RE, TSAR, ENZO, ENS, OCHRES, AMER, OTO, ISH, LA LAW, TISH, MAURA, JUDAH, and ATARI (whose clue kind of felt like it was saying that it’s still a major contender in the video gaming industry).

I object to the clue for NERDY [Not cool at all]. Au contraire! Nerdy is in fashion!

Enjoyed the clue for HYPHEN [Honky-tonk line?]. I thought it was SYPHON- like, a line that carries gasoline out of a…erm…honky-tank? and JUDAS looked okay to me… but I fixed when Mr. Happy Pencil was a no show. 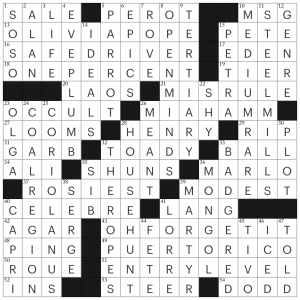 Happy Friday, team! We’ve got a clean, solid Patrick Berry puzzle to kick off the weekend. I enjoyed the grid design, several of the long entries (some were a little meh, but some were pretty sparkly!), and much of the cluing. Let’s talk puzzle!

The long entries today were bunched in the corners, with stacks of 10’s in the NW and SE, and two pairs of 10s in the SW and NE. The stacks of 3’s were OLIVIA POPE / SAFE DRIVER / ONE PERCENT and OH FORGET IT / PUERTO RICO / ENTRY-LEVEL. I loved OH FORGET IT and its kind of wordy but also spot-on colloquial clue [““Clearly, you’ll never take the hint, so never mind”]. ONE PERCENT clued for the [Beneficiaries of America’s wealth gap] is also nice, and a marked improvement over clues that reference milk, although the [, with “the”] part of the clue is a little inelegant, though necessary. The long downs today were COAL REGIONS / CORIOLANUS / HOUSE HUNT / OPEN MINDS /  MEDIUM-RARE / STEEL MIILLS. I like the combination of COAL REGION and STEEL MILLS from different parts of the grid, although I found some of the clues on these to be a little *too* straightforward (which I know is the whole thing about the Friday being easy, but, e.g., [Shakespeare tragedy about a Roman general] and [They’re receptive to new ideas] are just kind of meh. I’m also not sure MEDIUM RARE is red in the center? I always think of it as more of a pinkish situation, but maybe I’m just not great at grilling.

Overall, an easy, smooth solve to start the weekend. Plenty of stars from me.

PS. I wrote today’s USA Today crossword if you’re looking for another easy one to glide into the weekend!