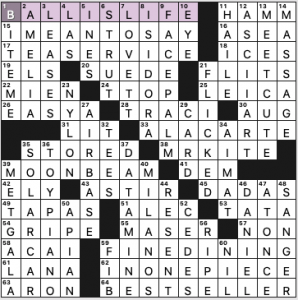 A surprisingly smooth and quick(ish) solve considering that I’d never heard 1-Across before and didn’t get the two answers below it without some helpful crossings. I love the nine-square diagonal through the middle of the grid.

In the “did not know” department:

Could do without Ron ELY, but that’s my biggest GRIPE here aside from the incorporeal AMELIA/INES/ISIDORA. 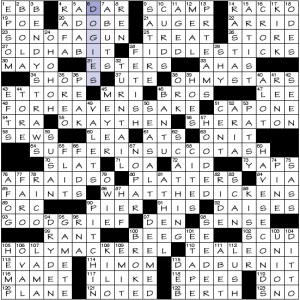 First, I’d like to thank the constructor and editor for using the same sequence of symbols in the clues of this grawlix-laden crossword; makes my typing here a bit easier.

Yes, so this is fine. Especially if you’re a fan of profanity. 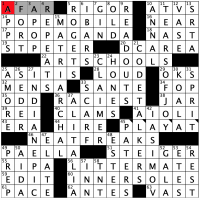 I found this much harder than a normal LAT, but then I looked at the byline, and I am not surprised. Frequent Stumper contributor Matthew Sewell had today’s LAT challenge themeless, and let’s just say I was sufficiently challenged by this one! This almost took longer than the “Stumper” puzzle, and that rarely happens to me. But this is a terrific themeless puzzle. Not sure why exactly it was so difficult; maybe I just need a nap! 4.7 stars for a stellar toughie. 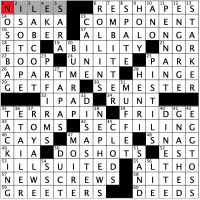 If I remember correctly, this pseudonym is the combination of Brad Wilber and Doug Peterson, and I found this the hardest of the “new Stumpers” yet. And by hard I mean just over 10 minutes hard. There is some very tricky stuff in this one. Maybe I just need a nap! I had better get my act together: the Boswords Spring themeless league starts Monday night! Great puzzle, guys! 4.5 stars from me.

Very clever title! I though it might have something to do with an L addition to common phrases, but nope!

THEME: Countries are instead clued as words, ignoring one of the letters in the entry. 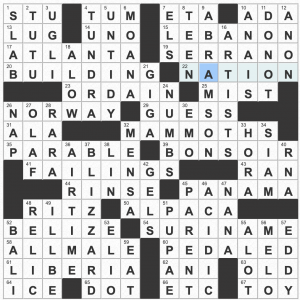 Well this was cool. About as “Thursday-ish” as you’ll see in Universal, and a lovely, tight grid. Also, let’s make sure we appreciate the rather Birnholzian bonus. That is, the “ignored” letters spell out yet another country: BRAZIL. Evan Birnholz, who constructs the Washington Post puzzle, uses this technique nearly every time a letter in a theme answer is being added, omitted, featured, etc.

There’s a LOT going on here, so it’s equally impressive to get a relatively crud-free grid. Sure, you’re not gonna get any splashy longer answers, and it would be ideal if other places one can find on a map, like BALI and ATLANTA were not mixed in there (at first I thought the hidden word was going to spell BALI, not BRAZIL, so imagine my surprise when it turned up in the grid anyway).

Like the little twist this week! There was another Universal that had a bit of a trickiness to it that ran not too long ago. Happy that Universal is not shying away from the cut and dry grid.