This smooth  Monday is Portia Lundie’s debut in the NYT daily puzzles. They have constructed Midi (9×9) puzzles for the NYT Crosswords App. I hope to see more from Ms. Lundie. Constructing good Mondays is not easy, and they have a knack for it.

I figured out the theme pretty early on and was delighted by the unexpected revealer. All the theme entries go in the same direction and each has circles. 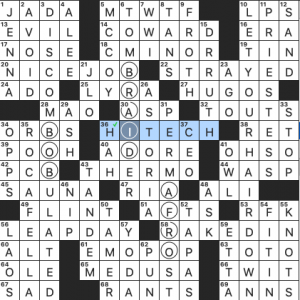 And the revealer: 10d [“Loosen up!”…or a hint to this puzzle’s circled letters: LET YOUR HAIR DOWN. BOB, BRAID, and AFRO are all hairstyles going down. Nice!

What I didn’t know before I did this puzzle: that Billie Eilish’s genre is EMO POP. 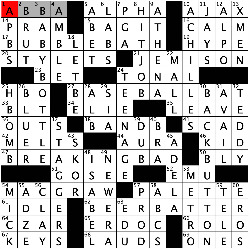 Y’all, I haven’t enjoyed a Monday this much in a long time. This appears to be a constructing debut, and a very fine one it is!

There’s nothing complicated to this theme at all; the central entry at 38A, B AND B [Inn offering a morning meal, briefly … or a hint to six puzzle answers] is more of an extra touch of elegance than a revealer. I don’t think you need it to know that the theme entries are all two-word phrases in which both words start with B:

Sure, themes of alliterative phrases are as old as the hills. But this is such a nice example of how it doesn’t matter that a constructor is using a trope if it’s as well executed as this is. There are 62 thematic squares, not counting the central revealer, and every theme entry crosses at least one other theme entry. So, holy wow, that’s an achievement!

But more important to the solving experience than how impressive the theme construction is, I think, is how evocative the theme entries are. Fill in 17A and you think of taking a nice relaxing soak; fill in 27A, you hear the crack of a ball on a bat; I can picture Walter White in my head even though I’ve never actually seen 47A. And, sigh, 62A makes me think of how nice it’d be to have some well-made deep-fried food, which is something that I haven’t really done since Before Times. Someday I’ll eat at a fish shack again…but see what I mean about being evocative?

The fill is not only fine, it’s got the gem of astronaut Mae JEMISON in the upper right; I’ve only ever seen her first name as an entry before, I think.

Bottom line: This is a beautiful Monday puzzle. I hope to see more from Jared Goudsmit!

The revealer is KEYWORD at 39a [Database search option, and a hint to the ends of the starred answers]. Each entry ends in a word that can follow “KEY.” 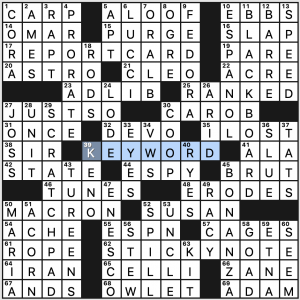 Solid entries, accessible theme. Just right for a Monday. There’s also sort of a loose school theme pervading the entries, which I kinda like. Well done.

Top bit of fill has to be BONANZA which is always a fun word. Soup TUREENS and ESPAÑOL are nice as well, and I’m partial to “JUST SO” which sounds quaintly refined to my ear.

ENESCO is tough for a Monday as is odd plural CELLI. And square one turned out to be harder than expected since 1a [Complain] could be HARP as well as CARP, and 1d is [Red Sox manager Alex] whom I don’t know. Luckily I guessed CORA correctly.

First of all: The New Yorker announced today that the crossword will be appearing in the print edition of the magazine going forward (full announcement here). This is huge news and a well-deserved show of confidence in the talent and artistry of their constructors, who make some of the best themeless crossword puzzles you can find in a mainstream publication. This will have a huge impact on the size of the their solvership, and I’m just so thrilled for this talented team to reach a wider audience. Congratulations, New Yorker constructors!!! 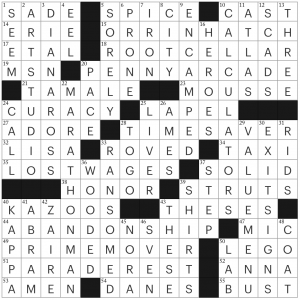 And to celebrate this excellent news, let’s look at Patrick Berry’s  Monday puzzle. I didn’t think this was particularly hard, but I [Very much indeed] enjoyed the solve. The long entries were all pretty fun (ORRIN HATCH notwithstanding), the wordplay was clever, and the trivia was great.

Highlights from the long stuff: CALCULATORS / PENNY ARCADE / ABANDON SHIP! / PRIME MOVER / PARADE REST / DIANA ROSS / LOST WAGES. To illustrate Jenni’s point in the comment about “boomer-centric”  easy entries, I’ve never heard of or seen MARATHON MAN. And to the larger point, that’s ok! I still found so much in this puzzle to relate to. In fact, despite the near certainty that Patrick Berry and I went to high school in different eras, this puzzle reminded me of high school in many ways—CALCULATORS! Reading the webcomic PENNY ARCADE (admittedly not what this entry was clued with)! Seeing high school productions of the Wiz (admittedly not starring DIANA ROSS)! Just a fun set of long entries.

Overall, tons of stars from me. See you Wednesday! 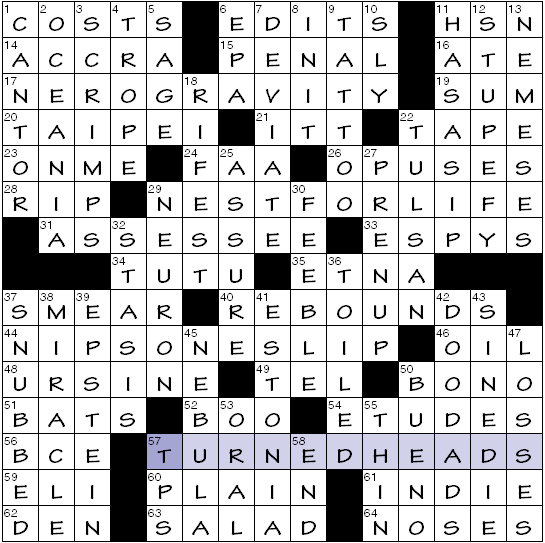 There are no Zs in the grid, though there are additional Ns that are not-formerly Zs. To have arranged that would have been a much greater constructing feat, and certainly would have made this crossword much knottier.

Even so, there is some iffy-for-an-easy-puzzle fill, such as ASSESSEE, SINE DIE, and RIFEST.

That’s all I’ve got today.

This one was harder than Brendan’s most recent Themlesses, and I enjoyed every minute of it. 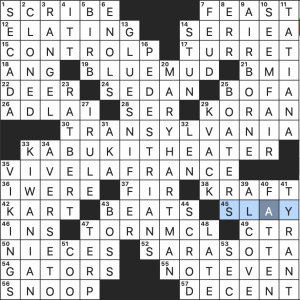 What I didn’t know before I did this puzzle: never heard of BLUE MUD. The resident geologist is not a sedimentologist. Did not know the TERPs were part of the Big Ten. Had never heard of a SLAY queen, which seems to have shifted from a term of admiration in the drag community to one of opprobrium in the straight world, because of course women who care about their appearance are shallow/nasty/obnoxious/stuck-up. And women who don’t care about their appearance are slobs/slackers/undateable/unfuckable. Verse #1,204,505 of the old standard, “Women Can’t Win.” 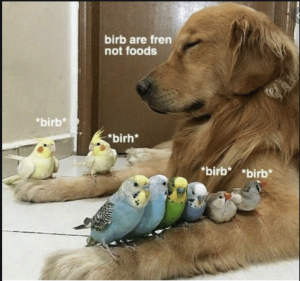