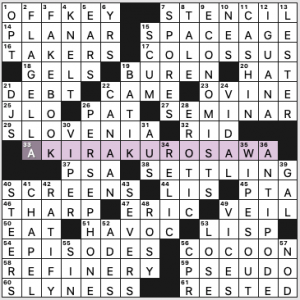 Interesting puzzle for a constructor’s debut. It feels distinctively unlike the typical themeless, with a nice set of vocab and names. In his notes at Wordplay, Mr. Bhagavathula says he built the puzzle around AKIRA KUROSAWA and “also had a little Shakespearean strain throughout the clues as an homage to Kurosawa, who is in many ways the Bard’s modern equivalent.” The crossword does have a rather scholarly vibe.

Fave fill: COLOSSUS, SLOVENIA (I need to brush up on 31d AUStria’s relative location, because neither this nor SLOVAKIA was feeling right to me), FLAGELLA (shout-out to Spelling Bee fans!), PERSEPHONE, BATIK, and a surfer who WIPES OUT.

Did not know: 3d. [Resource for music performers], FAKE BOOK. If it’s new to you, too, click through on that Wordplay link in my first paragraph for an explanation.

4.25 stars from me. Looking forward to seeing more puzzles from you, Sridhar! 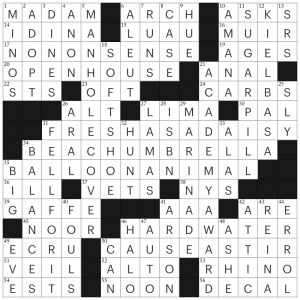 Quick write-up today! Loved the central stack, which had real Sunday picnic on the beach vibes with FRESH AS A DAISY / BEACH UMBRELLA / BALLOON ANIMAL. The other long entries are also excellent, although the highlight for me today is the cluing.

Aside from that lovely central staircase, we have NO-NONSENSE / OPEN HOUSE / HARD WATER / CAUSE A STIR / MAN HOLE COVER / ACADEMY AWARD / FELL FOR IT / SUGAR PILL filling out the long spaces. I recently learned that Robyn doesn’t use seed entries at all in constructing her themeless puzzles, which blows my mind, because she manages to get such solid long entries throughout! The wordlist curation and dedication that approach must require is just awe-inspiring.

Although the grid is obviously great, the clues are the real fun of this puzzle for me. Here are some highlights:

I guess that’s all the things! Overall, great long entries and fun clues, tons of stars from me. Have a good weekend!

Today’s theme comprises words, names, or phrases with an initial two-letter word (or prefix) which is repeated at the start of the second word. 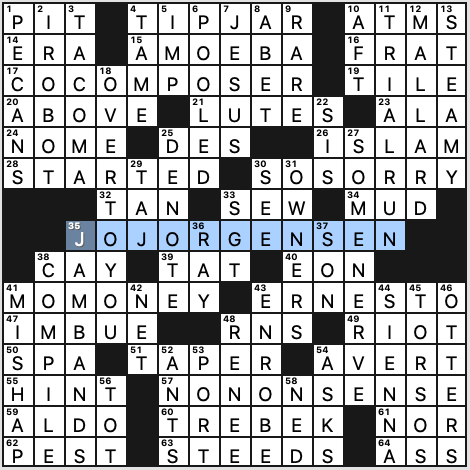 Interesting that only the vowel O is used. I guess because two-letter words are more likely to end in O than any other vowel? Not sure that the theme excites me all that much, but it is fun to say the list of doubled words, “Coco, Soso, Jojo, Momo, Nono.”

Andrew’s a veteran constructor, so it’s no surprise the fill is strong. The long entries are nice and sparkly: “OVER TO YOU,” “SOME NERVE!,” TRIAL RUN, and JAM BANDS. I also liked MALLARD, TACOMA (my neighbor to the north), TIP JAR, and ERNESTO clued with respect to the thematic movie Coco.

One clue of note: 9d [Doneness option for a burger]. RARE. Not a good idea. Burgers made from ground meats should be cooked to at least 160°.

A very clean grid. The theme is straightforward, so it’s good for newer solvers. Veterans can enjoy the long fill. Let’s put the whole endeavor at 3.7 stars. 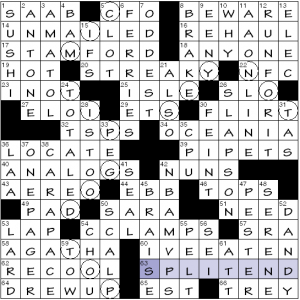