We see a lot of comments along the lines of “I can’t do metas,” and last Sunday’s Washington Post crossword had an easier-than-usual meta that solvers were happy to have cracked. If you want to try a different sort of meta, the WaPo is currently testing out a Mini Meta puzzle format from Pete Muller and Andrew White. (1) Solve the mini crosswords from Monday through Friday. (2) Take one word from each of those grids, in order, for a five-word clue. (3) Solve the Saturday mini and then find the answer (a word or phrase of 5+ letters) by zigzagging up/down/left/right in the Saturday grid. The Post is seeking your feedback on the Mini Meta during this three-month testing period. 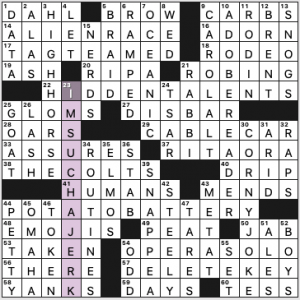 Kinda felt like another Friday puzzle, didn’t it? I was expecting/hoping for more of a challenge!

Lots to like here: TAG-TEAMED (and with a general clue, [Worked on together], rather than referencing pro wrestling), HIDDEN TALENTS, GLOMS, current pop star RITA ORA, THE COLTS, the classic POTATO BATTERY, DELETE KEY, HIGH HORSE, “I’M SUCH A JERK,” ADOBE READER, SNOGS, and (maybe—or is it contrived?) a CORNY JOKE.

What else is lurking here? These seven things, among others: 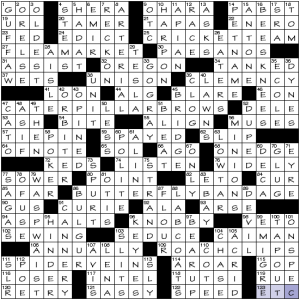 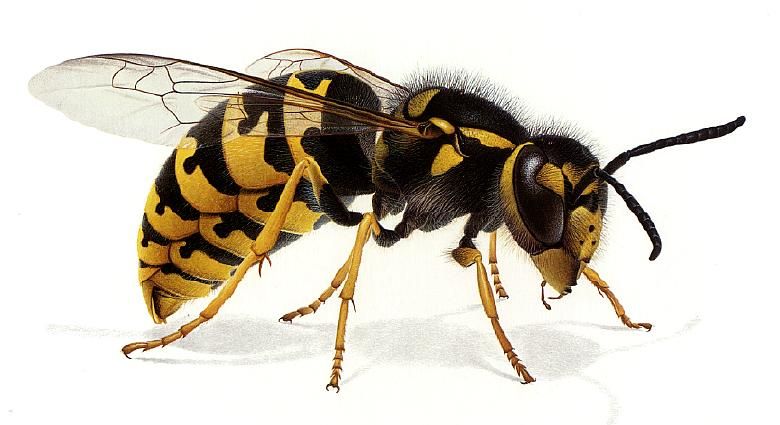 THEME: Words in common phrases are flipped and clued wackily 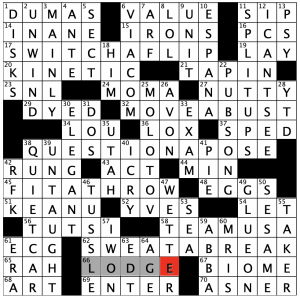 At first I thought there were a couple layers to this puzzle based on the first two themers. Because in SWITCH A FLIP, not only is the answer reversed, but the answer itself is describing what’s happening. That works for MOVE A BUST too, since the word BUST is being moved. But it doesn’t seem to work so well for the others, unless I’m missing something. It seems there are so many phrases one would be able to flip like this and find a way to clue ? style (POSE A STRIKE! [Suggest a union action?]) that I’m wondering if this set has anything more unifying that I’m simply not seeing.

The puzzle is just fine though! This is one that is excellent for newer solvers, and I’m always on the lookout for those since I make it a mission to turn at least two or three high school students into crossworders every year. Easy-to-grok theme and not too laden with crosswordese, though I have a feeling that SW corner would be problematic for many who aren’t familiar with grid-language.

Overall, no major gripes. I do feel like I may be missing something though… 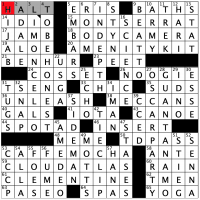 This is, I believe, a new byline that I have not seen before. If I have, I don’t seem to remember it, so at the very least it seems new! As I have mentioned before, I cannot possibly solve every puzzle, so this may or may not be a debut, but whatever the case this is a quite fine puzzle, and I am anxious to solve more with this byline! This one took me a tad longer than normal, indicating that the LAT may actually be trying to be a little tougher on Saturdays, as opposed to the “Stumper” puzzle, which is now trying to be a little easier. Or maybe I am just getting a little slower! But we are still having fun! 4.3 stars. 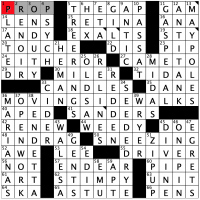 Is Stan going to ditch the pseudonyms? They have pretty much gone away, unless there is a collaboration puzzle, and even then the Newsday is the only regular gig I know of that still uses them. Perhaps things are changing? We shall see. Normally Stan’s puzzles are a shade easier than normal, and this one played about as tough as I would have imagined. A little thorny, but all fair in the end. I used Across Lite on this one, and you can see a few error marks in my final grid. One is a typo, but the others were brain-dead errors that I am going to blame on the vast amount of driving I did today! 4.5 stars from me.