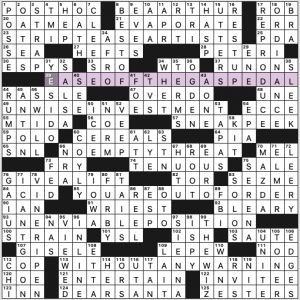 “Take two” letters from the phrases in the clue, pronounce them, do a little mental juggling, and there’s your theme answer:

Lovely theme. A pleasure to unravel the various theme answers and make sense out of it all.

Fave fill: BEA ARTHUR, OATMEAL, SNEAK PEEK, BLEARY, the ENTERTAIN-INVITEE series that reminds us of pre- and post-pandemic possibilities, DEAR SANTA, ZESTERS (you ever use your zester to get spreadable curls of cold, hard butter?), “I CAN’T GO ON,” VINE-RIPEN (mmm, summer tomato season is just a few months off), THE WIZ. Not keen on bits like PETER I, WRIEST, STN, and MT IDA, but they were the exceptions in a smoothly filled grid.

I had no idea what was going on with this theme and was about to pop a grid up here and let you tell me. Then I remembered there was a title. The circles in each theme answer spell a word that follows “outer.” The theme answers themselves are clued straight. 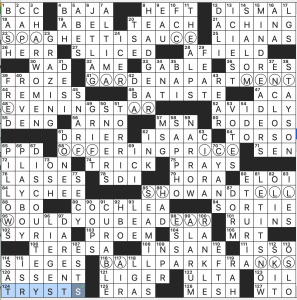 The note for this one says “Film starring Richard Gere” is the clue for a movie that has the same pattern as the stared answers. What is it?

Well, it has to be Pretty Woman, right? For sure. But let’s try to solve it organically anyway. 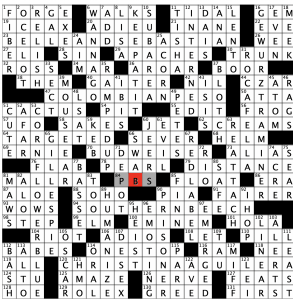 THEME: No idea… yet.

THEME ANSWERS: The starred clue/answer set are clearly the themers, and they are:

Here’s what I initially noticed that these themers have in common with one another: Absolutely nothing.

There’s a curious little clue in the SE corner of the puzzle that is kind enough to nudge the solver in the right direction, however. 131A says [Leading … and like the words in this puzzle’s starred clues that will help you solve the meta]. It’s clear as a bell now, but I was having a little too much difficulty interpreting the clue when I initially read it, and I was too eager to go down rabbit holes. So I just went with “firsts” in general.

Was CHRISTINA AGUILERA‘s first Grammy for Beautiful? Was CORNFLOWER BLUE the first color Vermeer used in a painting? Was If You’re Feeling Sinister BELLE AND SEBASTIAN‘s first album? No. But I did learn a lot about Vermeer’s penchant for exotic and expensive paints that left his family in debt, and I’m currently listening to the very pleasant second album of BELLE AND SEBASTIAN,  If You’re Feeling Sinister. Never heard of this group. I dig.

Then I had a phony AHA moment when I isolated the first words of each of the clues: Band, Coin, Beer, Tree, Singer, Color, and Wine. Anyone else notice the Singer right next to CHRISTINA AGUILERA? ALTO! Seems like a very Birnholzian direction to go in when it comes to metas. And look at that… ELM is in the grid which is a Tree! And RED LABEL kinda works with Color, right? OSCAR is an entry in the puzzle! That goes with Film… in a sense… from the clue mentioned in the meta note! Erm… how ’bout Band? GEMs are Banded perhaps? Or a LEI is a Band of sorts? That’s it. It has to be LEI.

It’s funny what you can convince yourself of when you are ass-deep in a rabbit hole.

It’s also funny how easy it is to throw out past meta solving experience, where I have learned to stay focused on what you know to be true. And here’s what we know for certain:

As soon as I took this step back, the answer was almost immediately apparent. Why does that clue have to start with the word “Film”? Why not… “Movie,” say? Or why not the year of the film’s release first, as is very typical in a crossword clue?

In fact, the starred clues all start with very basic words, most of which are four letters. So I focused on BUDWEISER, because it was the shortest of all the entries and I thought I would be most likely to discover a pattern there. Sure enough… Beer in the clue and BUDWEISER have something in common. The word Beer can be found in BUDWEISER. Can Singer be found in CHRISTINA AGUILERA? Sure can. And it’s all downhill from there. Here’s the complete list and a clearer solution grid (courtesy of Evan): 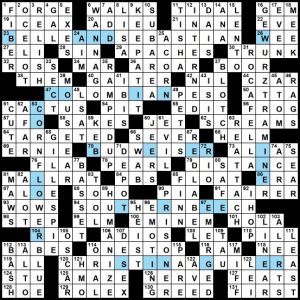 Now, we only have to look up Richard Gere Films and find one that fits the same pattern. It sticks out like a sore thumb. AN OFFICER AND A GENTLEMAN is the answer. Oddly enough, Primal Fear (love that movie!) has the correct letters to be the answer too, just not in the correct order :) 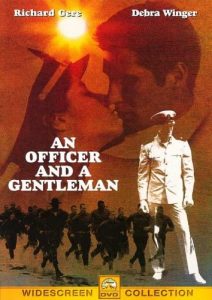 Really enjoyed this meta. It was much more difficult for me than last week’s. I spent about half an hour on this one.

There are indeed the “I-Hate-Meta” solvers, but I think metas are easy to hate when you don’t get the answer. Or when you are essentially being forced to complete two puzzles when you were only looking forward to one. When you don’t get the answer, it can cause anxiety to “solve” the puzzle,  and still not really have solved the puzzle. That is completely understandable. However, remember how frustrating it was when you solved your first few crosswords and you had to wade through some obscurities and a lot of Crosswordese? You can build your Meta-Muscles just like you built your Crosswordese vocabulary! And when constructed right, like this one and last week’s, the AHA clicks that come with them are intensely satisfying. There’s a reason why Matt Gaffney’s weekly meta puzzles are so celebrated on this site. And even when you can’t figure it out, it can be very satisfying to see where your missteps were. I really hope solvers who are easily off-put by metas can find a way to enjoy them eventually.

Also, Amy posted this note at the top of the blog yesterday, which seems to be asking for a copy/paste here:

We see a lot of comments along the lines of “I can’t do metas,” and last Sunday’s Washington Post crossword had an easier-than-usual meta that solvers were happy to have cracked. If you want to try a different sort of meta, the WaPo is currently testing out a Mini Meta puzzle format from Pete Muller and Andrew White. (1) Solve the mini crosswords from Monday through Friday. (2) Take one word from each of those grids, in order, for a five-word clue. (3) Solve the Saturday mini and then find the answer (a word or phrase of 5+ letters) by zigzagging up/down/left/right in the Saturday grid. The Post is seeking your feedback on the Mini Meta during this three-month testing period.

When solving this puzzle, you’ll notice the clues for the theme answers are written in a particular way: in all caps and with a space somewhere between the letters of the single-word clues. 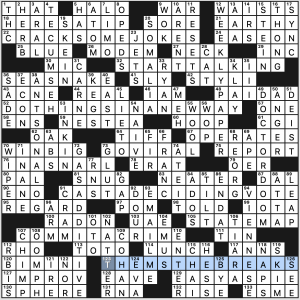 The revealer is at 123a: THEM’S THE BREAKS [“Life is hard,” and a hint to interpreting this puzzle’s clues in all caps]. “Break” is the keyword here, and each theme answer is a word or phrase synonymous with “break the {clue}”.

I enjoyed this theme. I didn’t need the revealer to suss it out, but it made for a nice confirmation. I was thrown a little by the short theme answers in the middle, but not for very long and they add to the mix. I also appreciate that for the most part, each answer phrase is a colloquial saying itself (except maybe DO THINGS IN A NEW WAY).

THEME: Common phrases that end with a steep geographic formation. 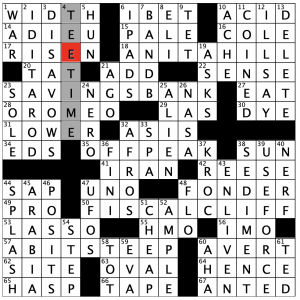 Perfectly fine set today. Not too much else to add to that!

Favorite mistake was TEE BALL for TEE TIME [When some start swinging]. Both work, right?

Other than that, this one fell right over the plate. No complaints at all, but I don’t see it lingering around in long term memory :)