The puzzle is easy enough for a Monday. The theme seems a little opaque to me, or maybe just a little thin. There’s a revealer at 13d: [Subject of this puzzle], ECONOMICS. The circled letters read SUPPLY and DEMAND. 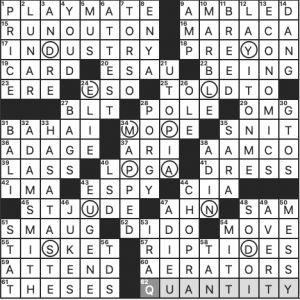 Is there more that I’m missing? Yes. Yes, there is. The Y axis, PRICE, and the X axis, QUANTITY, are placed accurately and thus what we have is the supply/demand graph in all its glory. And you all now know that I did not take economics in college.

What I didn’t know before I did this puzzle: that Philip AHN has a star on the Hollywood Walk of Fame.

Not a lot of people my age are named Stella. As a result, I tend to answer when my name is called (by contrast, my husband, David, is far more likely to respond to “Zawistowski!”). And since old-timey names like Stella are back in vogue, there are lots of small children in Brooklyn who share my name…and dogs who do, too. This makes it rather awkward when I hear my name shouted and it turns out someone is just trying to get their child’s or dog’s attention.

What does all this have to do with today’s LAT? Well, when it’s a dog and not a little kid being yelled at, today’s theme is dog commands that sometimes follow my name when people in Brooklyn are yelling. (Can I tell you how weird that was the first few times it happened? Snapping my head in the direction of my name being called and immediately being told to sit? It’s weird.) So explains the revealer at 62A [Where a puppy may learn the starts of 17-, 29-, and 46-Across], OBEDIENCE SCHOOL. 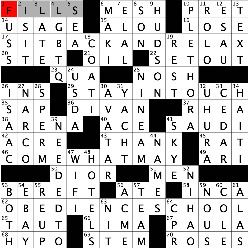 As with last week’s Monday, I would’ve been happy to trade the revealer for one more theme entry (HEEL-TAP REFLEXES? LEAVE IT TO BEAVER? DOWN ON ONE’S KNEES?).

I love any reference to PAULA Abdul, I’m not sure how modern a TEXT message is anymore, and it’s nice to see a NIHAO on Monday! 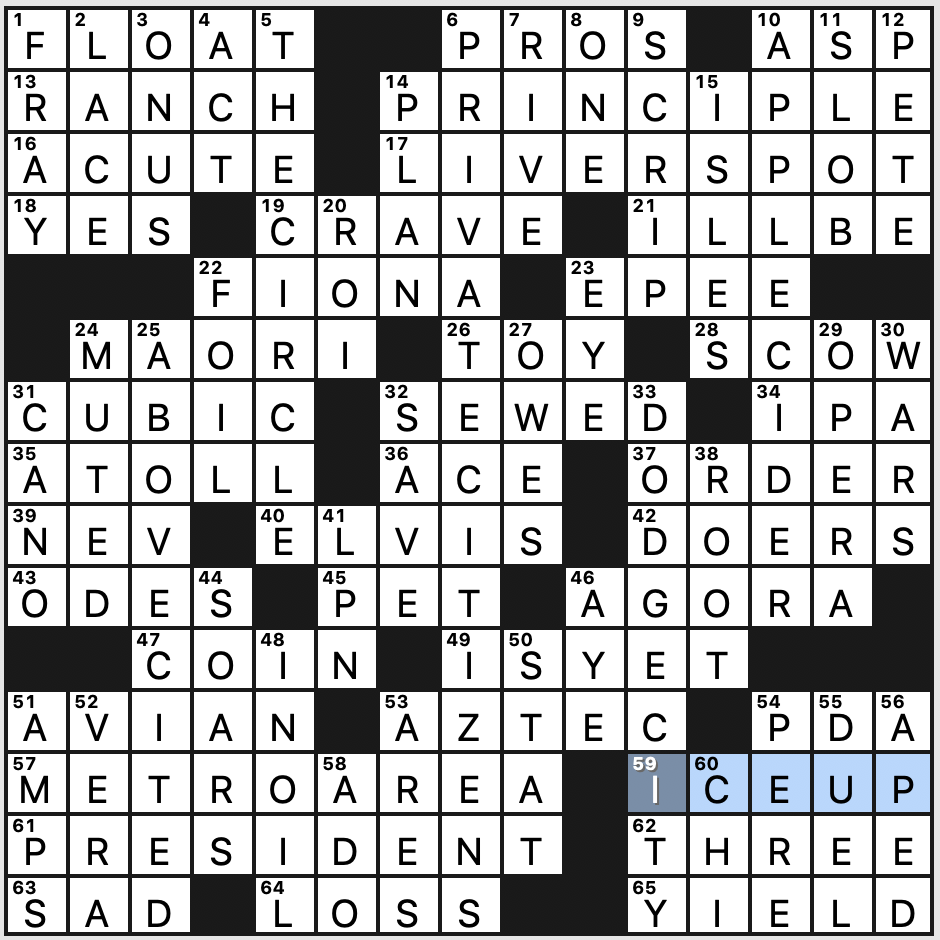 I appreciate that each entry has the hidden word spanning both theme answer words, but I just didn’t get much out of this theme. One, with the title being “Turning Colder,” I was expecting something to turn. I guess since the theme answers are vertical, they’re “turned” from the usual Across direction? Meh. Two, it’s spring, and most places are generally getting warmer (despite the intense hail storm we just had). Why not run this in the fall? Three, hidden word themes that have the same hidden word in each theme entry are less interesting than when the hidden words are all different.

I’d say this might be a good puzzle aimed at new solvers, but the cluing certainly didn’t seem that way, or else I was just on the wrong wavelength. The long Across entries also made it seem that the theme was to be found there, not in the Downs. I do like those entries though, LIVER SPOT and METRO AREA especially. I could do without RIVE [Split apart violently] (I wanted REND) and CANO [Baseball’s Robinson] on a Monday (I wanted JACKIE).

I just didn’t find much to get excited about in this puzzle; hopefully your experience was different. Three stars. 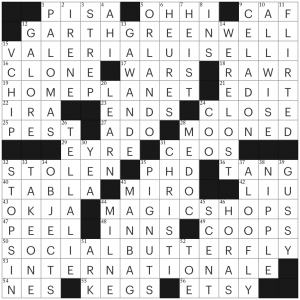 True to the label, this was a challenging puzzle! I earned one of my slowest times yet on a New Yorker puzzle, but I’m proud to say I did not have to google. Just… struggle. I didn’t know either of the long names in the N, although I am happy to have learned them, but the crosses were (mostly) fair. The trickiest part of this puzzle, for me, wasn’t the long unfamiliar names but rather the exceptionally high count of excellent misdirecting clues. There were so many good ones! To be discussed below.

First, the long entries. Actually, first, this grid design: Natan is one of the only people I’ve seen regularly stack a 14/15 and 15/14 like this, and I think it’s cool and weird and must be hard as hell to construct. Ok, now the long entries: GARTH GREENWELL / VALERIA LUISELLI / SOCIAL BUTTERFLY / INTERNATIONALE. As I said, I didn’t know the names, and I also didn’t know left-wing anthem The INTERNATIONALE (this is, after all, a Natan Last puzzle ?), and the clue on SOCIAL BUTTERFLY was a brilliant misdirect, so these long entries took me *forever*, but I got there eventually by chipping away at the downs. I think it’s not unlikely that some solvers would get tripped up on the VALERIA LUISELLI / Atul GAWANDE crossing — even if you know GAWANDE, it’s not obvious that the first vowel is an A and not an E, so you could easily end up with VALERIE, which looks equally plausible. VCHIP is also not a thing I have heard of, but I think the V was harder to miss on VALERIA.

Now let’s get into those clues! My favorite misdirects were:

Other clues I loved that were not misdirects:

That’s all the time I have for this writeup, but overall, I’d say despite (because of?) the challenge, I very much enjoyed the puzzle. Natan’s voice came through loud and clear, and I also enjoyed that. Tons of stars from me. 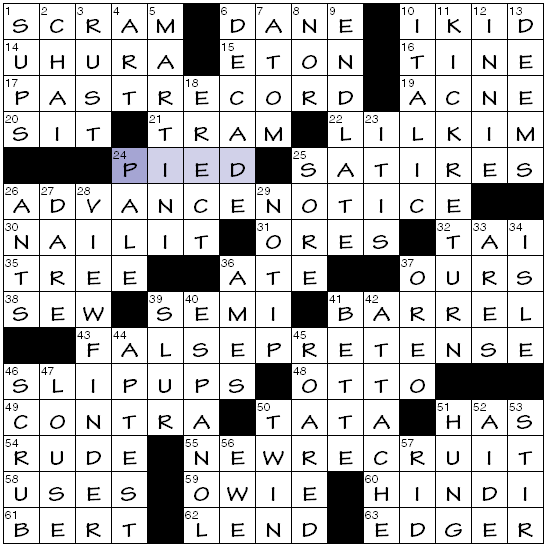 The theme is recursively self-explanatory:

The theme is recursively self-explanatory.

As Kelly mentioned in the comments, this was a terrific puzzle. I forgot to turn the timer on so I don’t know how long it took me to wrestle this to the ground. It felt like a long time and I enjoyed every minute.

Puzzles always feel harder when the NW doesn’t yield right away, and especially when it’s the last to fall. I had a blank grid until I got to the bottom half and then worked my way back up counter-clockwise and found myself starting at a nearly empty NW corner. I finally saw DO UP for [Make pretty] at 16d and then the rest fell into place. We see Desi ARNAZ in crosswords fairly often, almost always with reference to Lucy. This time we got [He had a breakout role in “Too Many Girls”] during which he met, you guessed it, Lucille Ball. If you’ve forgotten – or didn’t know – that she was an absolute knockout, just take a look. 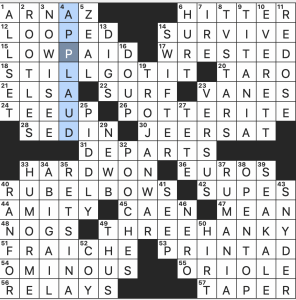 What I didn’t know before I did this puzzle: never heard of Hendrik SEDIN even though he won two NHL honors in 2010, did not know that William the Conqueror is buried in CAEN, and I’ve never heard of Cluj-Napoca, a city in RUMANIA.