Theme: Phrases that have a word normally ending in –ST have those letters changed to –SED forming new, wacky phrases. 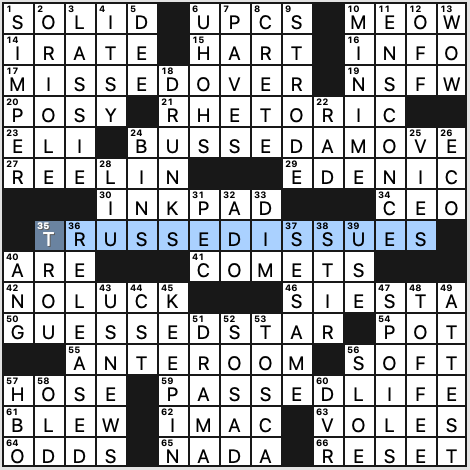 On the whole, I liked this, mostly based on the strength of the second and third entries.

Fill: Not so much flash, but I do like RHETORIC, ENSCONCE, and “NO LUCK.”

Good theme. Fill is solid but not remarkable. 3.7 stars. 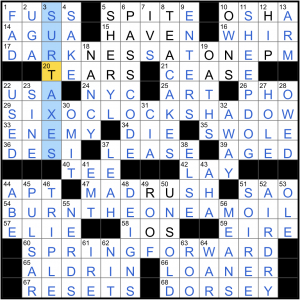 Look at the left-right symmetry on this Thursday’s NYT grid from Leslie Rogers!  It’s not the trickiest Thursday theme I’ve seen, but it’s cute:

reminder that Daylight Savings Time starts this weekend!  All of these names/phrases/etc. have had their times shifted forward an hour.

This is Sara Cantor’s debut in our reviews, and it’s a great start. Before I get to the puzzle, I want to acknowledge that the roster of constructors for the Fireball is more diverse than it previously has been. I’ve criticized Peter’s male-dominated bylines and he deserves credit for making a change. I know it takes work and attention. Sara is non-binary and uses she/her or they/them pronouns. As I said, they gave us a whiz-bang of a puzzle today!

I realized there was something missing from each theme answer and I thought it was a rebus. I also had some errors that got me in trouble and made it more difficult to figure out what was going on. 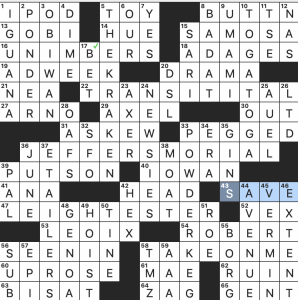 The revealer saved me. 58a [1985 #1 hit for a-ha…or what you have to do to fit six answers into this puzzle]: TAKE ON ME. Aha! (so to speak) I looked at the 16a and 22a again and realized I had the base answers wrong, and I also realized it wasn’t a rebus – I had to take the letters ON ME out of each answer, so the crossings work with one letter in each box. What a great theme idea. It’s brilliantly executed and would not have been an easy puzzle even without the twist. There are a couple of compromises in the fill and I don’t care a bit. I suspect there will also be distress over the proper names from current pop culture, several of which either intersect or make up theme answers and did, indeed, slow me down. You know what? That’s on me (so to speak) because I’m a old-ish white woman. Constructors are not obligated to play to my strengths. Sara taught me a few things and that’s totally cool.

What I didn’t know before I did this puzzle: see above. I also did not know that ANA de Armas appeared in “War Dogs,” or that Italy’s oldest soccer team is in GENOA.

I figured from the title that the theme answers would be missing the letters AND. I think I would have known that even without the FB theme fresh in my mind. I was right, and I still enjoyed the puzzle. Each theme answer has a base phrase that’s this AND that. Remove the AND; wackiness results. 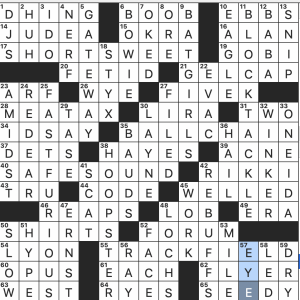 Fun! Solid except for my one nit-pick at 25d. All the base phrases are definitely in the language and the execution is consistent. Six theme answers is a lot for a 15×15. I don’t think the fill suffers for it.

What I didn’t know before I did this puzzle: that LYON‘s airport is named after Saint-Exupéry. Draw me a sheep! 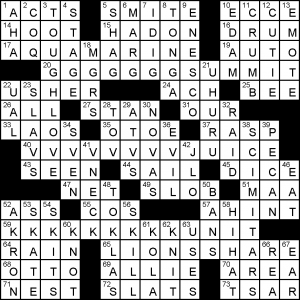 Today’s theme has just three entries, so we expect a tight set. It’s a tricky theme, with nothing seeming to fit initially. However, once you grok the theme, you get a lot of free letters! I guess that adds up to it running on Thursday not Friday? The first entry is G8SUMMIT, represented with eight G’s; my issue is that there is a G6, G7, G14, and a G20 so it isn’t that specific. V10JUICE is an American thing; I wouldn’t have guessed it was made by Campbell’s. The CANINEUNIT sounds like K9 and we have 9 K’s to represent that – an extra step compared to the other entries.