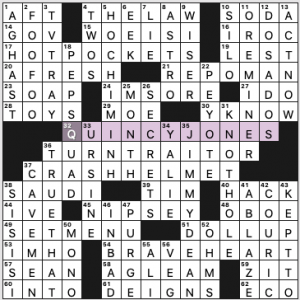 Oh, hey! It’s Peter Wentz with another themeless. I just enjoyed his Boswords Spring Themeless League puzzle Monday evening, and that one was easier for me than most Boswords themelesses, but still tougher than most Saturday NYTs. I don’t often sneak under the 4-minute mark on Friday (there are a number of hotshot solvers who can go under 3 minutes), but here I did, so I’m feeling very much on the Wentz wavelength this week. We learned from his Boswords Twitch interview after the puzzle (which starts around the 50-minute mark in this video) that he doesn’t typically start with a seed entry he wants to build around. Which is wild, because looking at tonight’s grid, the 9s, 10s, and 11s all have a vibe of “yeah, that would be cool to see in a puzzle.”

Fave fill: “WOE IS I,” HOT POCKETS, “Y’KNOW,” QUINCY JONES, CRASH HELMET, NIPSEY Hustle and Russell (for all generations!), “TRUE THAT,” HO CHI MINH with a neat clue (5d. [Nom de guerre roughly translating to “bringer of light”]), PEP SQUAD, and JIMMY DEAN. Oh, yeah, there are a lot of proper names and titles (at least 16), which means “this is a trivia test” solvers are mad as hell (I see you!) but I breezed through it.

I kinda dug the AGHAST, AGLEAM, ABLAZE trio. Makes me want to do a jig with my arms AKIMBO. 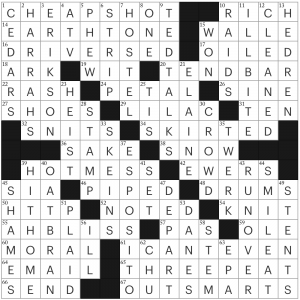 Super smooth puzzle from Caitlin Reid today! When the worst thing in your puzzle is the objectively-totally-fine EWERS, you know it’s a solid grid. I also love the grid design here, with the diagonal slash of black squares through the middle. And as is frequently the case with these easy Fridays, the clues are better appreciated upon reviewing the puzzle, because the solve just goes so quickly!

The long entries today are the stacks of 9’s in the NW/SE: CHEAP SHOT / EARTH TONE / DRIVERS ED / I CAN’T EVEN / THREEPEAT / OUTSMARTS. All excellent, although my clear favorite is I CAN’T EVEN. I once had a trivia team of bioethicists called “Literally Kant Even” and, years later, it’s still my favorite team name I’ve ever used. Other notable entries today include I’LL BITE, HOT MESS, HIT HOME, and TWERK. Such fun entries all around.

Overall, this was a lovely, clean grid with lots of fun cluing and exciting entries. Tons of stars from me!

(and if you have the chance to solve today’s Inkubator puzzle from me and Brooke Husic, I hope you enjoy it!)

There’s no actual turning involved with this theme. However, various social gatherings are re-imagined as (turned into?) something else. 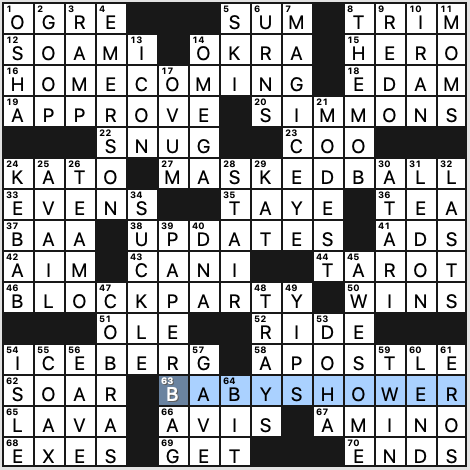 Plenty of sparkly fill to like: MAGIC EYE, PAPER BAG, “AWESOME!,” THE MOB, EMERSON College, SUCKLE, COBRAS, ICEBERG, and APOSTLE. And nothing much to dislike. 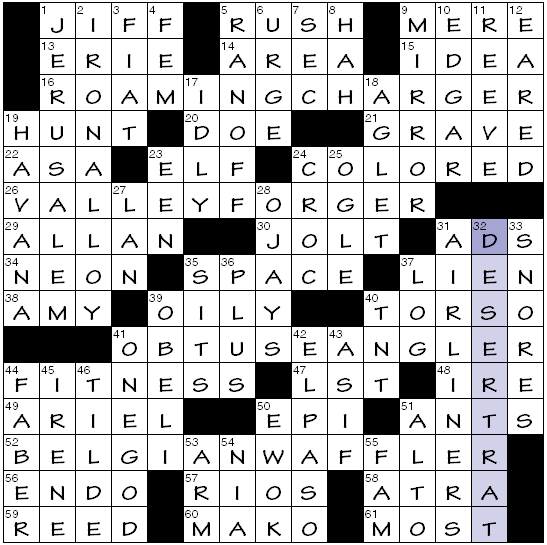 Phrases that normally end in a certain noun are modified to a performer of said thing and the results are wackily reinterpreted.

I appreciate that in each instance an effort was made to distance the new noun from the original one. This is not to say they don’t have etymological connections, as they certainly do. 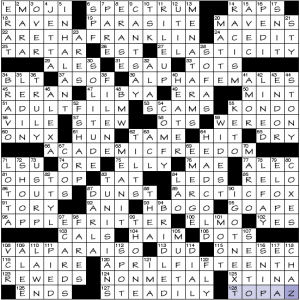 I loved this crossword, even though I found it more than moderately challenging because I don’t have the same cultural reference frame as Rachel, Brooke, and the Inkubator team. As I said on Wednesday, that’s on me. I figured it out in the end and I had a great time.

The theme answers are two-word phrases that start with AF with amusing clues.

Despite my quibble with 66a, I love this theme. It’s fresh and fun and playful and would not have shown up in a “mainstream” puzzle.

What I didn’t know before I did this puzzle: phew. So many things. Never heard of makeup artist/drag queen RAVEN. Did not know that Bong Joon-Ho called the Oscars a “very local” awards show before PARASITE won “Best Picture.” I was unaware that the Whitney Museum houses a sculpture called “Giant BLT” and now I want to see it. Had no idea that Lolo Jones and OBJ went to LSU. And see above re: THORNE and HAIM. I’m sure I missed some!