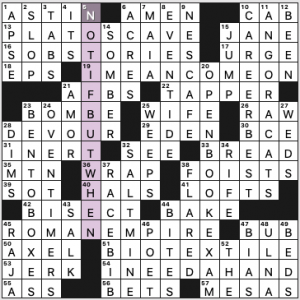 Good thing I inadvertently had the timer off, because it took me awhile to make headway in this grid!

New to me: 51a. [Product of tissue engineering, such as artificial skin], BIOTEXTILE. Textile sounds so inorganic.

Fave fill: PLATO’S CAVE, “I MEAN, COME ON,” Jake TAPPER (didn’t know he had a cartooning background), “I NEED A HAND,” “NOT IF, BUT WHEN” inevitability, BENTO BOXES, RACE BIB (my husband’s a marathoner, those bibs and safety pins are a regular sight here), OPEN BOOK EXAM (my son had one last week for physiology), CAREER BEST, and ANGORA CATS. Lots of nice stuff here.

Did not know: 35a. [Cheyenne, e.g.: Abbr.], MTN. Not in Wyoming but Colorado, near Colorado Springs. I have more Vail family connections myself.

Such a family-and-friends vibe in this puzzle for me! Not the usual experience. Four stars from me. 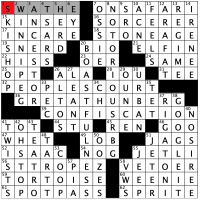 My Facebook acquaintance Mary Lou has this Saturday’s LAT challenge puzzle. The wide open center is the highlight of this grid, with the timely GRETA THUNBERG right in the middle. Not too difficult of a puzzle, but that is OK! I have a busy weekend to get to. Let me get straight to the comments! 4.3 stars for this puzzle. 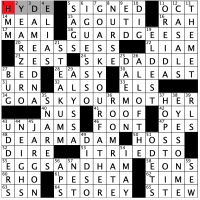 I have decided that the key for me, and one of the joys of puzzle-solving in general, is having peace and quiet. No interruptions. No distractions. If nothing else, that means that nothing was crowding out my thoughts for 10 minutes or so. That was the case this week. Great time, no major issues, but this is not that easy of a puzzle. Easier than they have been? Yes. Too easy? Not really. I think that is one of the allures for those of us that solve crosswords; we are perfectly content in our thoughts, while some people struggle with the solitude of brain twisting. The blogging/social media aspect of crosswords has changed this world quite a bit, but it is still primarily a solitary activity, and if you’re like me, you are at your most content during such times. I hope you found this puzzle as relaxingly pleasing as I did!

This one had a mini-theme with the interlocking 15-letter answers of GO ASK YOUR MOTHER and GO ASK YOUR FATHER in the middle, which I actually had a little chuckle once that was solved. All the more to add to the solving enjoyment! 4.4 stars today.

Some other stuff I found interesting:

Everyone have a safe and healthy weekend. This pandemic is almost over! 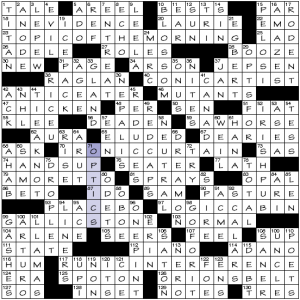 Bigram insertion time! I promise it won’t hurt too much.

The ICs appear at the ends of the first parts of the original phrases. With the exception of anteater they’re all separate words.

Nothing super-exciting but it gets the job done. A more challenging construction would be to eliminate stray ICs from the rest of the grid, but why bother, really? I’m not exactly distracted by inclusions such as 47a [Yellow] CHICKEN. On the other hand, I find 71d [Public perception of an event, politically] OPTICS somewhat more problematic—it ends up with the same kind of suffix as the theme entries, in that context it echoes 29d [Chooses] OPTS FOR, and it serves to provide less-than-stellar optics regarding the theme (if one is looking for trouble, as I clearly am).

This puzzle is asking for mistakes!

THEME: “MIS” is added to the start of common phrases, thereby creating wackiness. 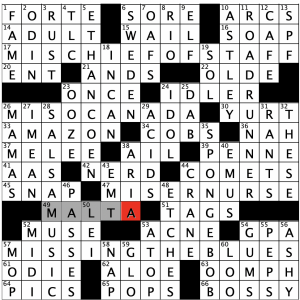 But can we talk about BOSSY the cow down there in the SE? Is that a common cow name?? I thought BESSY perhaps (as a variation on BESSIE). Or ELSIE. That works too. BOSSY? Ima google dat. Well, I’ll be. Seems like plenty of cows named Bossy, including one whose statue was vandalized.

There’s those two anyway. Are cows typically named? That seems like a lot of work.

Anywho, this was fun,