It’s St. Patrick’s Day, so it’s time for THE WEARING / OF THE GREEN (59a, [With 63-Across, famed Irish street ballad, and a hint to this puzzle’s theme answers]). The other theme answers “wear” a shade of green identified in the circled outer letters. 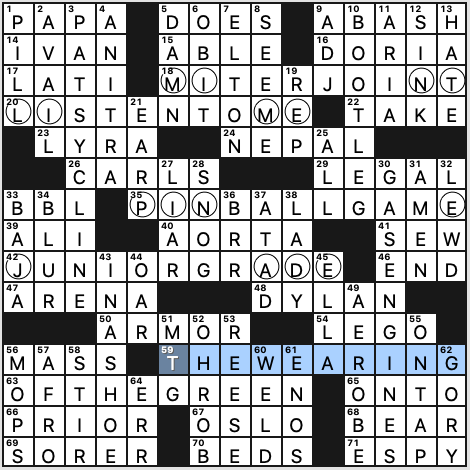 Solid theme and good choices for theme entries. Just about perfect for a Wednesday.

New constructors, note how veteran puzzle maker Mike Shenk laid out the revealer. Both parts are 10-letters long, so he could have split them up and put one near the top of the grid and one at the bottom. But it does make them easier to read when they’re together and it’s a better effect during the solve if you don’t hit the revealer until the bottom. It might have been more elegant if the first half was left-justified and the second half right-justified, but I’d bet the stacked letter combos led to clunkier fill.

The marquee fill spots go to GAS ENGINE and PATSY CLINE. BOOTLEG is good as well and somehow pairs nicely with IN A SHOE. Did not know ANITRA [Dancer in “Peer Gynt”], and AEROBE is one of those words you only see in crosswords, unless your line of work involves the study of bacteria. 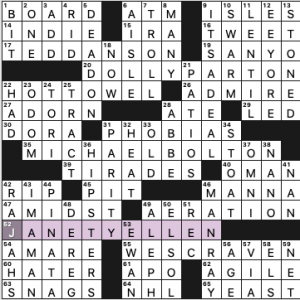 Fun theme! We play on famous people whose last names sound kinda like gerunds if you elide the G: 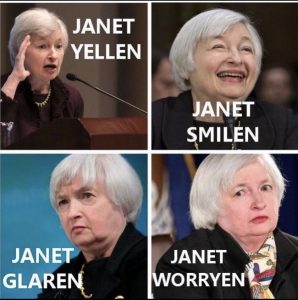 Here’s the meme. It’s glorious. Which Janet are you today?

Fave fill: I always appreciate a HOT TOWEL, though I am rarely offered one. HIPSTERS, MAN RAY (and that’s not a dupe with “I’M A MAN,” as this MAN is short for Emmanuel).

Least fave: STOAT, ABBE. At least we’ve made it past Monday and Tuesday? 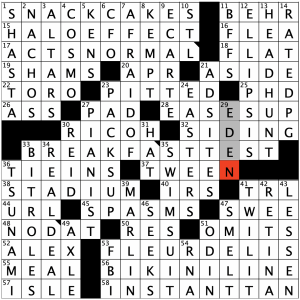 Today’s puzzle from the AV Club is another fantastic themeless from Wyna Liu.

Ah, TRL, “Onetime MTV show associated with a boy band boom” that gave us crossword fill the likes of NSYNC. 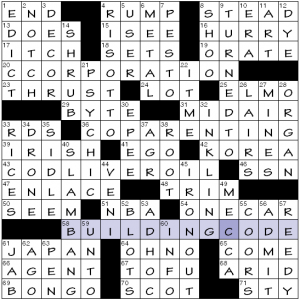 This seemed at first to be a rather weak theme, but the thing that legitimizes and even makes it admirable is the way the lead-in letters are always followed by a hyphen. 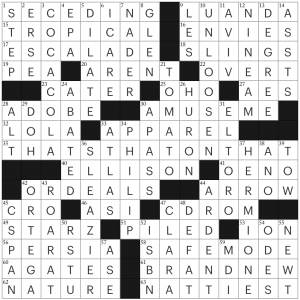 Goooood morning! Today’s puzzle was ok! There’s a lot to like, but a few sections that just didn’t totally work for me. Let’s talk about it:

First, the marquee entry is THAT’S THAT ON THAT. I guess this is kind of fun, but I’m not sure how much of a *thing* this is. I don’t think I’ve ever heard someone say it, but it’s also inferable from the clue, so…. I think it’s fine! The corners are pretty solid, with SECEDING / TROPICAL /ESCALADE and SAFE MODE / BRAND NEW / NATTIEST. Longish downs were COCA COLA / SLEAZIEST / HERMIONE / UNLOOSEN. I really dislike UNLOOSEN here, both because it’s not a common word but also because it makes no sense. UN- implies “the opposite of” and LOOSEN means “Free from restraint,” so you’d think UNLOOSEN would essentially equate to “tighten” but for some reason it does not! I guess that’s kind of cool but mostly it made me look at the puzzle like it was drunk.

There were a few patchy areas of fill that I could live without holding this puzzle together, and overall I’m not sure it was worth the tradeoff. RSTU / ASE / AS I in the SW are particularly not great, but we’ve also got some ERSE / MDI / AES scattered in there as well.

Overall, several stars from me, and THAT’S THAT ON THAT. 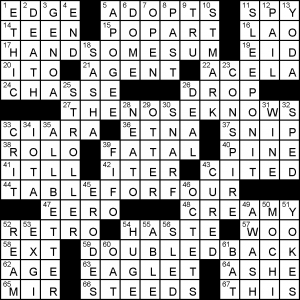 I really appreciated that the revealer, DOUBLE(D)BACK, didn’t pair with the cliched approach of “words that combine with”. Instead, the last two syllables are the same, or at least similar. Two of three answers: THENOSEKNOWS and TABLEFORFOUR are top tier for my book; the first, HANDSOMESUM, was the slightly wonky wheel on the shopping cart.

The rest of the puzzle played easy and breezy, with ALLBETTER and STROLLER evoking cute parental imagery and MOCHI as new vocab that was easy to get with fair crossers.