This is a nice, tight theme involving well-known phrases where the last word can be associated with the game of poker and the first word can be the last name of a famous person. 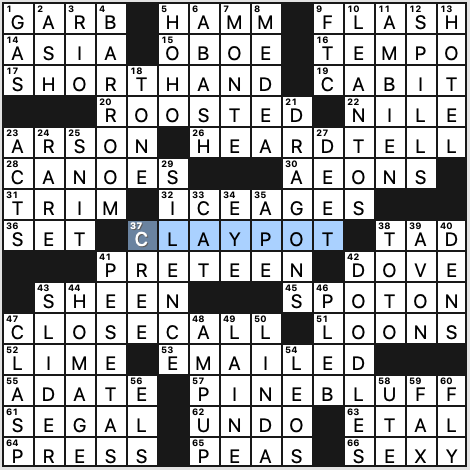 At first, I thought the theme was just playing on the famous last names, which didn’t strike me as anything noteworthy. But when I realized the poker connection, I was suitably impressed. There probably aren’t that many phrases that can fall into this category, so getting them all together and fitting them in a grid is definitely noteworthy.

The fill is not too shabby either with DRAGONS, DOODLES, PESETAS, SILENCE, and BAR ROOM. I balked on CAB IT, though [Take part in the fare trade] which I’ve only ever heard in a song from The Muppet Movie. Google the phrase and there is next to nothing out there. There are a few instances in the Cruciverb database, but with nothing to back them up, I’d say this phrase needs to go. Do people actually say it? 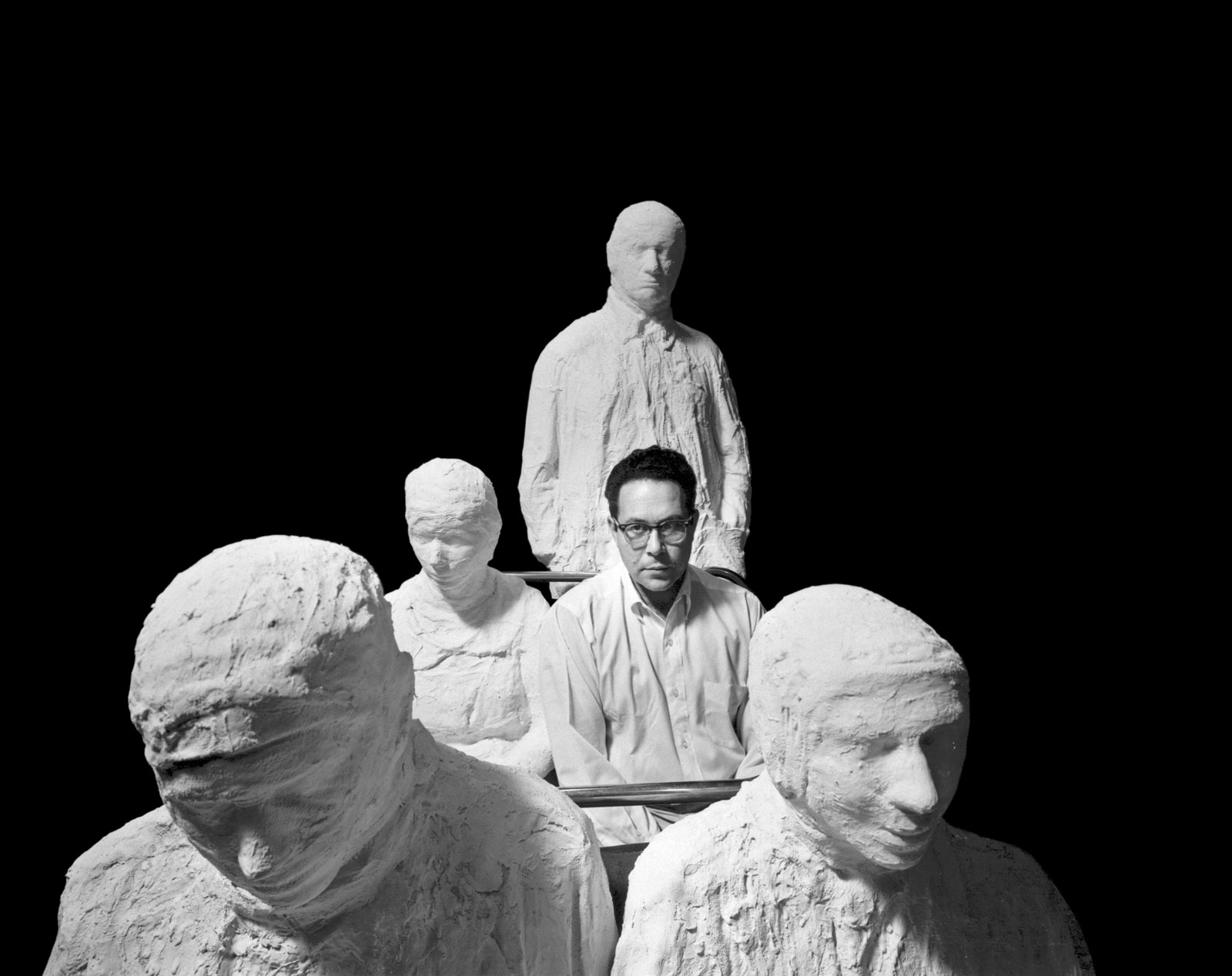 George SEGAL with one of his sculptures 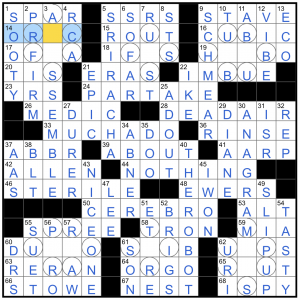 Tom McCoy has today’s NYT grid and I like the idea of what’s going on.

This one has a bunch of sections of circled squares rather than normal theme entries, so let’s start with the revealer and work backwards from there

And indeed, we have MUCH ADO — circled squares spelling out FRACAS, FUSS, HUBBUB, UPROAR,  STIR, and RUMPUS — ABOUT NOTHING — empty squares — in the grid.  It’s clever, and even with empty squares manages to fit in some interesting clues, like the fact that “Eleven plus two and twelve plus one, e.g.” are ANAGRAMS

“Steely Dan, e.g.” are a DUO, much like Donny and Marie here.

This is Elise Corbin’s first appearance on Fiend. I hope we see a lot more from her! Kudos to Peter for three non-male constructors in a row and three terrific puzzles in a row. This puzzle is a feat of construction that was a lot of fun to solve. Those two things don’t always go together.

I didn’t figure out what was going on until I got to the second theme answer – I read right over the first one without noticing anything. Each theme answer takes the homophone of a number kind of literally. It’s easier to show than describe, at least for me. 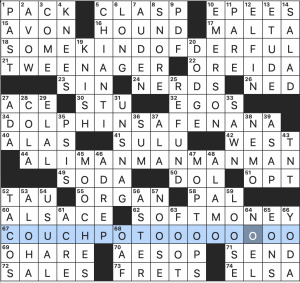 Four answers that fit this pattern, fit into the symmetry of the grid, include two grid-spanners (it’s 16×15 to accommodate them) and have the numbers double as you go down the grid. This is an amazing puzzle. Thanks, Elise and Peter!

That’s all I have time for this morning! What I didn’t know before I did this puzzle – see above re: SOME KIND OF DERFUL (that makes me laugh. I had to type it again). I’ve also never heard of AESOP‘s “The Swan and the Goose.” I don’t quite see how the moral comes from the story.

THEME: TY is added to the ends of common phrases to create wacky ones 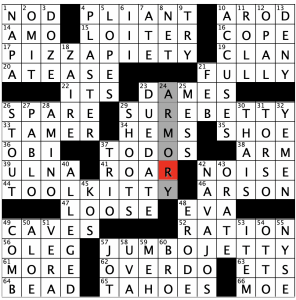 I felt a little 59D about this one, especially with it being very similar to Tuesday’s puzzle (the last Universal I blogged). Except Tuesday felt much more clever, so by comparison this one falls flat for me. It does sometimes feel like Universal runs chunks of similar themes near one another, but that’s probably just me.

PIZZA PIETY was my favorite of the themers. It has a sing-songiness to it that I rather enjoy.

I entered JETE (like JETER) for A-ROD [Legendary Yankees shortstop, informally] because I’m all but positive A-ROD was a third baseman for the Yankees. Maybe he played short for a bit? But Jeter was definitely the “legendary shortstop.”

This was all I could find about it from Wikipedia:  Prior to the 2004 season, Rodriguez was traded to the Yankees, for whom he converted to a third baseman, because Derek Jeter was already the Yankees’ full-time shortstop.

The theme answers take words or phrases and tack on the Zodiac sign ARIES. Wackiness results. 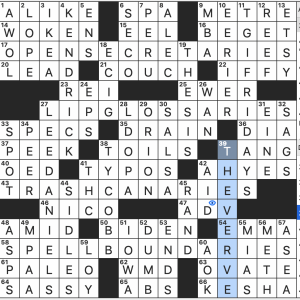 Fun theme! At first I thought it was going to be different Zodiac signs, but the title clearlky tells is it’s A sign. The minor issues in the clues don’t really bother me. Brendan gives us two high-quality free puzzles every week. It seems churlish to complain about a couple of typos. And I’ll take this opportunity to remind you that if you enjoy Brendan’s puzzles (and I know you do) you should go on over and tip your constructor. We’re lucky enough to be living – and solving – in a golden age of indie crosswords. I want them to make money so we can have more puzzles.

What I didn’t know before I did this puzzle: never heard of “Bitter Sweet Symphony,” although THE VERVE sounds familiar. And when I looked up the video, I realized I have heard the song but didn’t know its title, which is ridiculous, because it’s the first line of the song. That’s [Facepalm-inducing]. 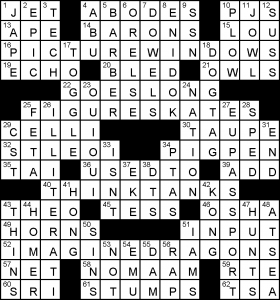 This theme is certainly ambitious – four answers are conceived of as imperative sentences – and clued accordingly. All four are supposedly synonyms of “contemplate”. IMAGINEDRAGONS, PICTUREWINDOWS and THINKTANKS all hit the spot, but FIGURESKATES sounds rather more stilted. As it was, this theme set uses left/right only symmetry so I’m guessing there are very few options here.

Some interesting medium to longer choices today: ILLITERATI, DOGTAG and paired HONG/KONG – but these are offset by STLEOI which is one mad entry.