Puzzle fans, rejoice! Patrick Berry’s got a new puzzle extravaganza for sale at his website. Nine variety puzzles along the lines of the ones he publishes in the Saturday WSJ, plus a wacky “Anything Goes” crossword as a bonus. $15 for hours of brainy fun, with $5 of each purchase going to COVID relief. This is one of those “shut up and take my money!” situations, if you ask me. Enjoy!—Amy 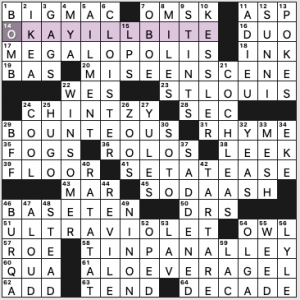 Kind of an odd puzzle here for Kameron. First off, it’s 72 words, and he has (had?) a preference for making low-word-count grids. Second, there’s some fabulous stuff I love, but it’s peppered with a little clunky stuff instead of being across-the-board great. I have sky-high expectations for the top echelon of themeless constructors! And Kameron’s definitely in that group.

Fave fill: “OKAY, I’LL BITE” is terrific. I like MEGALOPOLIS, MISE EN SCENE, CHINTZY, BOUNTEOUS, ULTRAVIOLET, TIN PAN ALLEY, CLOISTER, and COCHLEAS with an etymology clue ([Parts of ears from the Latin for “snail”], must be cognate to French coquille for snail shell).

Having OMSK right in the top row started me off feeling that “crosswords from 30 years ago” vibe. And … okay, that’s really it for the clunky stuff. It takes an expanded bit of headspace when it’s one of the first things you see in the puzzle! This is why I criticize puzzles with a dreadful opening corner—if you’re gonna have some subpar fill, don’t put it where your solvers encounter it before you have a chance to win them over with the rest of the puzzle. 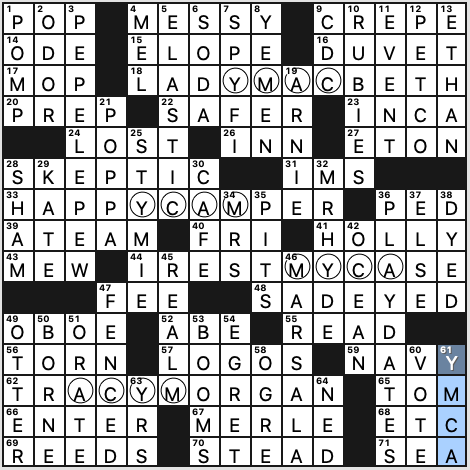 Young man, now you’re looking perplexed
I said, young man, there’s no need to be vexed
You can do it, ‘cuz it’s your time to shine
So just let it out; you’ll be fine!

You just can’t do a thing!
Oh, this song you’ll destroy
You’re just shouting a bunch of noise.

Oh, I can’t dig this scene,
There’s just no hope for you.
You can’t do what ever you feel.

Well, that’s enough of that. You can tell I enjoyed the theme. For the record, the theme revealer is YMCA, clued [Popular sing-along song that’s butchered in the starred answers?], which is why I felt I could butcher the song above.

Bonus points to you if you followed along and did the gestures in the wrong order, even if you kept flubbing it, like me.

On top of the humorous theme and fun theme entries, the fill shines too: PLAYDATES, PEPÉ LE PEW, MR HYDE, STYMIE, SKEPTIC, and MARSALA wine. I can look past the odd SAD-EYED for all that goodness.

Clues played it straight for the most part, but there were some nice fresh ones in there. 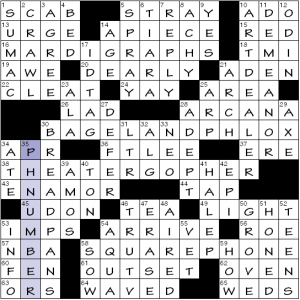 Just for the record, pH stands for either ‘potential of hydrogen’ or ‘power of hydrogen’ and measures relative acidity. Phew! 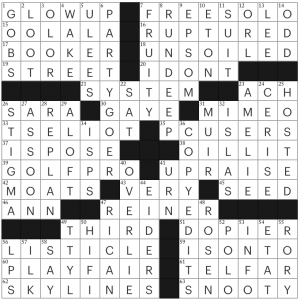 Hello, happy Friday! Not a ton to say about this one— there’s a cool grid shape, but it means there aren’t any particularly long entries. We’ve got some stacks of 8s in the NE and SW, but otherwise, not a ton of excitement in this puzzle! I also felt it played tougher than your average New Yorker Friday.

The stacks today consisted of FREE SOLO / RUPTURED / UNSOILED and LISTICLE / PLAY FAIR / SKYLINES. These are all pretty good! I had a lot of feelings about FREE SOLO (some of which were due to not knowing how it ended before watching it, and some of which were about Alex Honnold’s relationship with his girlfriend, but regardless would definitely recommend it if you have not seen it!). RUPTURED had a fairly graphic clue that made me wince [Torn, as an eardrum], and I recently had LISTICLE in a puzzle of my own and think it’s a super fun word. I googled the clue [“29 Celebrities Who Are Secret Canadians,” e.g.] to see if it’s a real LISTICLE and, in fact, it is. Other non-stack long entries are PARTY GOER / COPY EDITS, which are pretty straightforward, although I enjoyed the clue on PARTY GOER [Ball girl, e.g.?].

A few things didn’t work for me today. The SE was particularly rough (for a New Yorker Friday, that is): not knowing TELFAR. and the possibility that SNOOTY could also have been SNOTTY, made this pretty intractable. The addition of RORY Gilmore, who I knew but many solvers may not, probably means some DNFs at the TELFAR/RORY crossing. I also don’t really care for PC USERS or its clue [People running MS-DOS, e.g.] — I’m no computer whiz, but I suspect very few PC USERS are running MS-DOS in 2021.

Overall, several stars from me. See you next week!

17 is my favorite number and this is a worthy puzzle. Quick notes before I head out to work:

True to the Inkubator’s mission, every name in the grid belongs to a woman. And yes, it matters. I don’t do the crossword Bechdel test because I always forget the scoring. I still notice that the majority of names in the majority of grids are male and that even words that could be clued as women’s names are not (see “quiche LORRAINE” from a recent puzzle). It matters until it doesn’t and we’re not there yet. Reverse sexism isn’t a thing and men as a gender will survive one puzzle where they are not mentioned. God knows we’ve survived enough where we are ignored. Don’t @me either about the content or tone of this paragraph. Just – don’t. 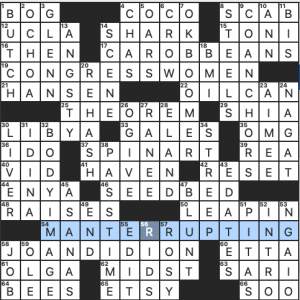 What I didn’t know before I did this puzzle: that JOAN DIDION is the subject of a documentary called “The Center Will Not Hold.”