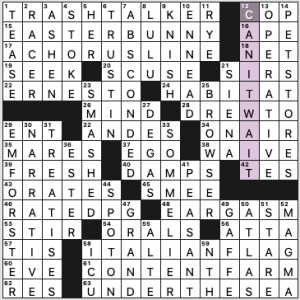 Hey! What’s this Friday puzzle doing in the Saturday slot? Probably the same thing Kameron’s Saturday crossword was doing as a Friday. Were the difficulty levels flipped for you, too?

Today’s pick for Amy’s Favorite Entry is “CAN IT WAIT?” I feel this one deeply. Also liked TRASH TALKER, EASTER BUNNY (I had to Google to find out when Easter is—apparently it’s two weeks from Sunday), A CHORUS LINE, EARGASM, dreaded CONTENT FARM. E.M. FORSTER, ABSCONDED (just a great word, innit?), and PET STORES (my neighborhood pet store is a … reptile specialist).

ESTER and SMEE are in good sections, but I don’t like ’em. 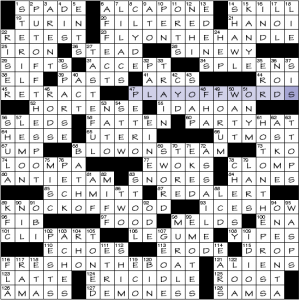 Theme is exactly what it says on the tin. Phrases originally containing “off” have that word changed to “on” and vice-versa.

Perhaps it’s my mood this morning, but this crossword was way off the mark for me. The theme answers seemed uninspired and repetitive, as did the bulk of the tired ballast fill. This standard 21×21 grid felt at least 25% larger and commensurately sloggy. This despite a—for me—relatively swift solve (sub-9 minutes).

I thought the title was hinting at some sort of mixing up or moving of gears in this one. Nope! “Shifting” is an adjective here. Not a verb.

THEME: Common phrases that start with an automobile’s gear modes 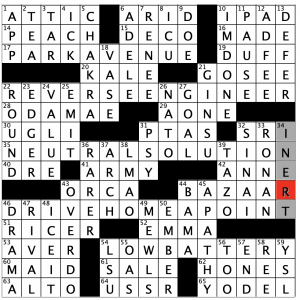 Solid set! Very in-language with a tight consistency. I still drive a manual (and my dog has chewed the stick shift to the point that it’s barely recognizable), so I don’t enjoy the luxuries of PARK, DRIVE, and LOW.

I felt like I was going faster than I actually was. Surprised myself when I looked up to see my time tick past the four minute mark. I think I got caught up on some names. DUFF for one, RONAN for another. I can throw RENEE in the mix too, but that one was more inferable.

I was unaware that churches were associated with BAZAARs. I found that… bizarre (couldn’t resist).

***I neglected to include NEUTRAL SOLUTION in the original write-up 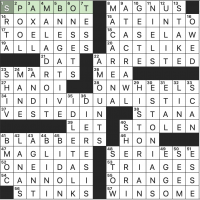 Look at this grid! An awesome 64-worder this Saturday, and only 4 three-letter words! These wide-open grids are hard to fill, and you typically can end up with an answer or two of out and out hogwash, but that is not the case here. This puzzle is making me want to work on my word list more! I have done puzzles this wide-open over the years, and many times the fill has some garbage in it. It is normally unavoidable. But THIS one is magnificently filled with clever entries and virtually nothing wonky. Stella is turning into one of my favorite constructors! 4.9 stars for a stellar Stella puzzle!

Gotta go: a new Panda Magazine comes out today! There goes my Saturday … 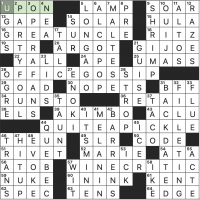 I found this one also a tad tougher than normal. Still under ten minutes, but I didn’t get into my Paolo Pasco “vibe” until about halfway in. Maybe I need to learn, at my ripe old age, to be able to tap that zone easier. It is hard to do sometimes with all of the distractions in my life, including a soon-to-be 9-year-old that is always busy! But once that zen is found, it is so relaxing and enjoyable, which is another key reason why I enjoy puzzles so much. With some weird cluing there almost could have been a theme with this one, but that would have been a stretch! Great puzzle, Matthew. 4.4 stars.